Where the Sidewalk Ends…

I usually try and keep the personal behind the scenes stuff off of Branded, but I’ve been meaning to write about something for awhile and this just seemed like the day to do it.  Next Monday would have been my big sister’s 44th birthday, but it isn’t because on November 27th, 2010 she took her own life on a dreary Sunday morning.  Every single day that’s passed since I received the panicked phone call informing me she had hung herself has been a bit of a struggle. 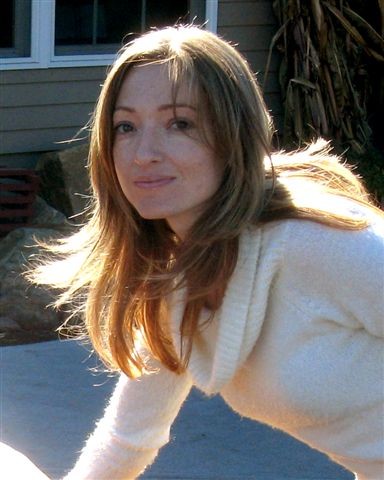 There’s no doubt in my mind that I spent the first 32 and a half years of my life following in the footsteps of my big sister Beth.  She was, hands down the coolest, nicest, and smartest person I’ve ever had the pleasure of knowing, and whether she knew it or not I spent the majority of my childhood hanging on every word she spoke.  I can trace back so many of the things that I feel define me directly to her, whether it’s my ability to draw, my design aesthetic, my taste in movies and music, my choice in cars, or the overall outlook I have on how to lead my life.  She metaphorically laid down the sidewalk that I’ve been following my entire life. 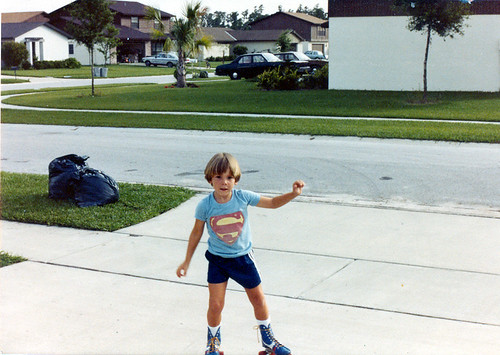 I remember the day when I was four years old and she gave me her old pair of roller skates, these huge blue monsters that were way too big for my feet.  They had sweet white stripes on the sides and red wheels, and she taught me how to tip my toes down to use the “break” peg to slow myself enough so I wouldn’t come crashing into the front door of the house whenever I wanted to stop.  When I wore those skates I felt like I could fly, like I was Superman, and she was the one who taught me how to do that.

Up until I was 8 or 9 Beth also used to let me “camp out” in her room.  She’d get a bunch of sheets that she would tack up to the wall on one end, and tuck underneath the mattress of her bed on the other, and she’d let me hang out all weekend in her room.  It was the only time I was “allowed” in there, and it was usually when she was doing a bunch of stuff for cheerleading or with friends.  This might sound weird since she wasn’t there, but half of the excitement for me was that she gave me full reign over her books, turntable, and record collection (but I wasn’t to touch her dresser or closet!)  I spent so many weekends flipping through her collection of LP’s introducing myself to Cheap Trick, Rick Springfield, Prince, Cyndi Lauper, and the B-52s.  Over the years I borrowed and eventually took ownership of her collection of Judy Blume books as well.

When I was 12 years old, Beth brought home a copy of Peter Jackson’s Bad Taste from the video store, and she let me watch it even though it was one of the horror films my parents had actually forbade me to see.  That same year she drove me out to a second-hand bookstore and encouraged me to pick up my first two “adult” novels Stephen King’s The Shining and Christine.  Beth also gave me my first Weird Al cassette, and didn’t seem to care when I immediately usurped her tape player so that I could listen to those songs every night before I went to sleep.

When I was getting to that awkward age of ten, when she was eighteen and it wasn’t cool to hang out with your little brother, she still let me tag along with her.  There was this one time when she let me pile into a car with three of her girl friends and we all went over to jump on Beth’s boyfriend’s trampoline.  Someone got the bright idea to cover the thing with detergent and to hose it down to make it an extremely fun and stupidly dangerous adventure.  Thank goodness we all had bathing suits on.  I remember we took turns in pairs getting into the shower (in our swimsuits mind you) to get the soap off, and I was paired with one of Beth’s more attractive girl friends that I had a crush on.  All I’ll say is that my sister gave me a knowing wink afterwards.

When we ended up moving to New Hampshire from Florida at the end of 1989, Beth stayed.  She’d already moved out into an apartment earlier that year when she was still 19, and that always stuck with me.  The first thing I did when I turned 19 was move out, not because I felt like I needed to (in fact my parents would have been overjoyed had I stayed), but because Beth did and it just felt right. There are countless other things my sister introduced me to or encouraged me to do, and it kills me when I think that I never got a chance to really repay the favor.  Over the years I tried my best to introduce her to stuff that I loved as birthday and Christmas gifts, but I’m not sure if she realized what I was trying to do for her, repaying what she had done for me.

The last time I saw my sister was in July of 2010.  We’d been meaning to get together and go on a vacation in Savannah ever since I became an adult, but it just never materialized.  That year though we finally did it.  It wasn’t really a vacation as it was only a whirlwind 18 hours total, but I booked a two bedroom bed and breakfast that overlooked the river, and we met up on a Saturday afternoon.  I had been really excited to see her because she had recently asked me to draw a logo and mascot for a new business she was looking to start up.  She’d never asked for anything like that from me before and I was so happy to finally do something creative for her.  We spent the afternoon talking about the drawing I’d done and what her plans were for the company she was going to call Goblin Technologies. 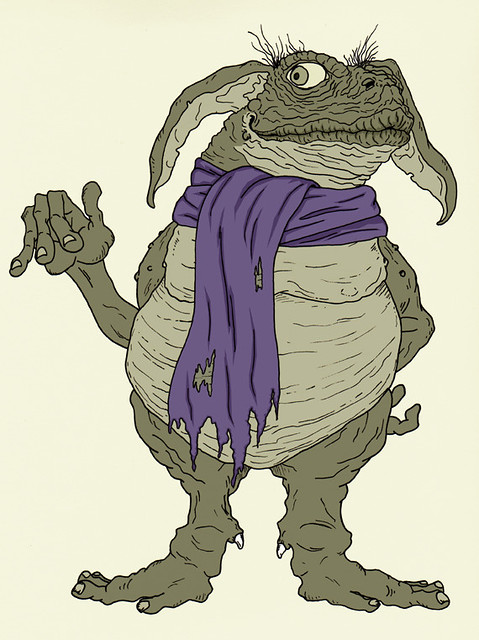 We spent that evening going up and down the river-walk, browsing in all the shops and more or less catching up.  My favorite picture of us together is from that day (the one below), where we were caught making the stupidest faces ever together.  It’s unflattering as all hell, but it’s also hilarious and I love it. 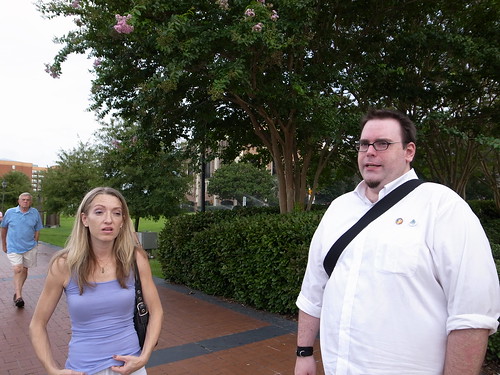 She had scheduled a ghost tour for my birthday, and that night around 10:00pm we met up with our group in one of the town squares and had probably the worst evening ever.  Between the rain, the unseasonable cold weather, and a very boring and pretty lame tour guide, we were all drenched and pissed off.  Though I still enjoyed the experience of walking the streets of Savannah in the dark, it was a rough night.  That next morning Beth had to jet back down to Florida, so we said our goodbyes, and while she was walking away to her car I snapped the below photograph.  After I took the picture, I didn’t look back at her, I was busy fiddling with the camera to make sure the photo looked alright and then was on my way to finish off my mini Savannah vacation. 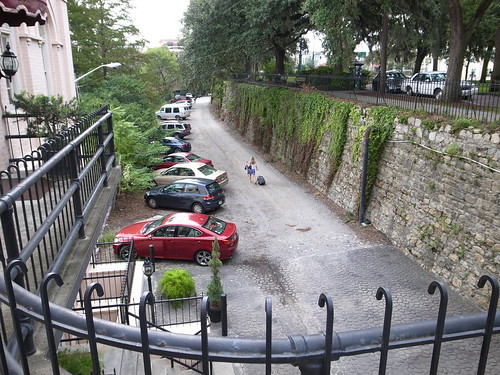 I didn’t know it at the time, but that photo is literally the last time I saw my sister.

I’m no expert on grief or dealing with death, but I think I can kind of authoritatively say that dealing with the loss of a loved one is compounded tenfold when suicide enters the picture.  There’s a level of disbelief and immense feelings of rejection that are almost impossible to shake, even years later.  At the end of the day, all I do know for certain is that if you have someone in your life that means half as much to you as my sister meant to me, tell them.  Right now.  Write them a letter, send them an e-mail, text them, call them, go over and hug them.

As a positive post script to this, I took all my anger and grief and put it to use since my sister passed.  Though she didn’t leave a traditional note (most don’t I’ve been told), I was able to piece together the last couple months of her life (she kept a lot of journals) and have a pretty good understanding of how she came to the place where she made her ultimate decision.  Part of the digging reveled what I personally feel is her “note”, a lone jump drive that was in her purse that had 12 songs on it.  Each song seems to address someone or something that haunted her at the end of her life.  No one knows where the drive came from, and those songs were not from albums found anywhere else in her music collection.  When I listen to those songs I feel like I can hear what was in her head at the end and it’s been what I’ve needed to drive me to do things that I’ve been meaning to do for years.  In particular, those twelve songs have been my weight loss soundtrack for the last year and a half.  I was always overweight (you can certainly see that in the photo above), but after Beth I knew I had to ditch that extra girth.  The last thing my sister helped me do was to get to a healthy weight, dropping from a high of 400lbs to my lowest since the 9th grade of 252lbs.  So there is that. 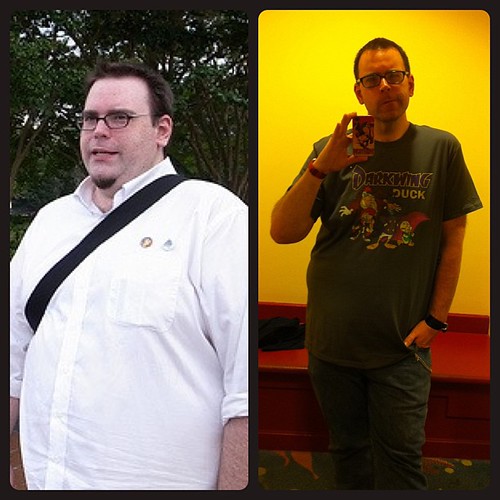 I reached the point in my journey where the sidewalk my sister created, ends.  I’ve had to learn over the past 2 and a half years that it’s my job now to keep building it, even if I can’t see where it’s leading. 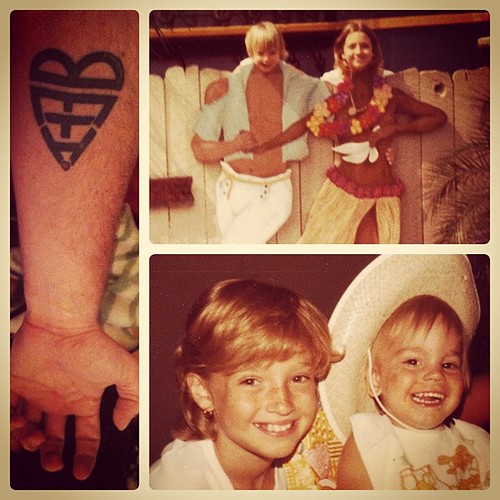 So, something pretty damn RAD happened…