So I was recently indoctrinated into the whole 24-hour T-Shirt a day phenomenon when friend of the site Slick McFavorite (of the Open Your Toys podcast) pointed me to an awesome Universal monster mash-up design that I had to have.  Honestly, as much as I’m into pop culture, my wardrobe of cool shirts is pretty damn limited and I’ve been trying to change that over the last six months.  One of my favorite recent purchases was from the site Ript Apparel, a shirt called 8DTron by the artist known as Brinkerhoff… 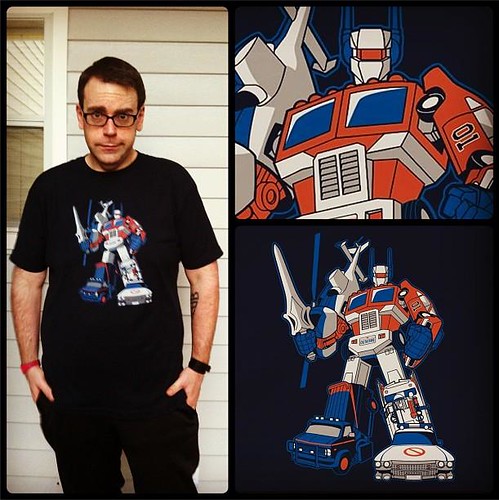 Seriously, how great is this concept?!?  Showcasing a bunch of 80s pop culture vehicles, this Devastator-esque combiner robot 8DTron hits on so many of the things I love from my childhood.  Airwolf (aka The Lady), the General Lee, Rick Hunter’s Veritech (or the Jetfire Transformers toy, you be the judge), the A-Team van, Ecto-1, Optimus Prime, the license plate from the Back To The Future Delorean, and He-Man’s power sword.  Not only is the design super cool, but the actual shirt is pretty damn nice as well, especially for $10 plus shipping.

Honestly, coming across sites like Ript is pretty cool, but it’s also sort of like opening Pandora’s Box (or more accurately, her Armoire) as I can easily see myself developing quite the shirt-a-day habit.  Well, Ript is holding an amazing contest where one lucky winner can win the cool shirt mega lottery, literally a shirt a day for an entire year! 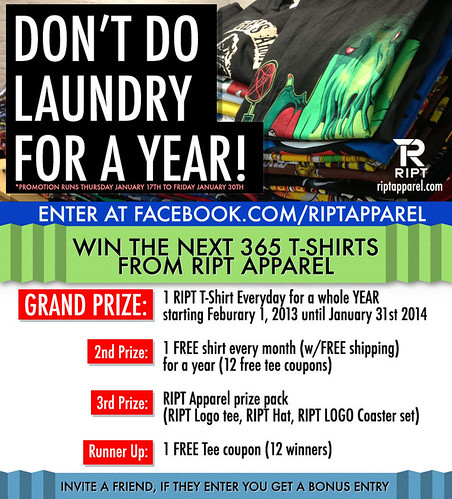 Don’t do laundry for a year: win the next 365 t-shirts from RIPT Apparel

This Thursday until the end of January, RIPT Apparel will be conducting it’s biggest customer giveaway ever. An entire year’s worth of tees will be awarded to one lucky contestant. Yes, that’s 365 shirts, every design printed for an entire year.

To get a grasp on just how many shirts RIPT makes in a year, check out this video displaying the entire roster of shirts from 2012

RIPT Apparel is a Chicago-based online apparel retailer that sells one new shirt design every 24 hours. Each design is created by artists who share in the profits for each sale and retain the rights to their work after their artwork is sold.”

I measure my years in Coreys…