Alright, it’s day 2 of the 31 Days of Monsters Halloween Countdown, and since I started out with a cel from the Real Ghostbusters yesterday it’s time to switch things up and visit one from Filmation’s Ghostbusters!  I like to start these cel countdowns with stuff that’s either not-so-scary, or with characters that might otherwise be considered one of the good guys.  So, sort of like the Slimer cel, I was thinking of a character that would be sort of similar in the Filmation universe and the one that immediately sprung to mind was Ghost Buggy! 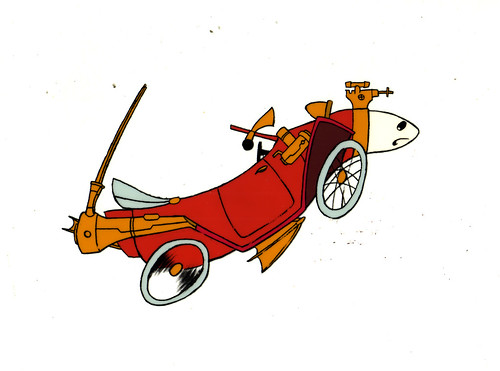 Certainly a “must” for any Ghostbusters outfit worth its salt is a sweet, yet temperamental ride, and Ghost Buggy fits that bit to a T (a haunted Model T that is.)  This southern jalopy is not only sentient, but he can also transform into all sorts of vehicles from a car to a plane, a train, and can even travel through time!  DeLorean, eat your heart out.

One of the aspects that I love about Ghost Buggy is that his face doubles at the logo for the team.  Whereas the Real Ghostbusters cartoon writers and series developers did their best to work in the “No Ghosts” logo specter into the opening credits and interstitials, Ghost Buggy is actually a part of the team in the Filmation series.  In a way GB is almost the ultimate 80s cartoon logo/faction symbol in this manner (think the Autobot, Decepticon, Cobra, and Thundercats logos.) 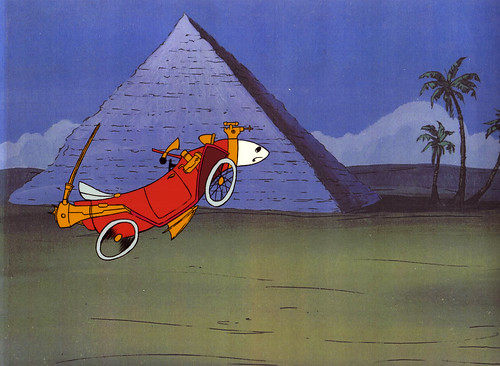 Anyway, I was lucky enough to score a copy of this cel with one of the vintage Filmation background photocopies, so for once we can put this cel in context of a scene.  Though I’ve yet to get my hands on some of the original Filmation background paintings, these photocopies really go a long way to making me feel like I have a small piece of this cartoon in my collection.