This week’s assignment from the League is a really fun one (suggested by Poe Ghostal over at PG’s Points of Articulation) that invites the members to program their own dream Saturday morning cartoon line-up.  The SMC programming block is an unfortunately extinct network tradition that was a weekly bit of bliss for kids during the 60s through to the 90s.  With the advent of dedicated 24-hour kid-vid channels like Nickelodeon, Disney and Cartoon Network it became increasingly harder and harder for the big three to compete for the cartoon and kid’s programming market share and over the past 15 years or so Saturday morning has lost its association with 5-6 solid hours of cartoons.

Luckily I’ve managed to secure copies of practically every cartoon that I remember loving as a kid, and whenever I get a chance I program my own Saturday morning cartoon line-up, so this assignment is something near and dear to me.  Sort of like with last week’s Mixtape assignment, I didn’t want to just list the shows I’d want to see.  I wanted to do something a little different.  One of the aspects that I loved about each new fall season was getting a chance to see all the advertising that the networks would put together for their SMC line-up, my favorite of which was a series of CBS, NBC, and ABC comic book ads that would mash-up all the characters from the various shows.  In fact, putting together an archive of these ads was one of the first big projects I worked on for Branded.  Taking some inspiration from these I created my own fake advertisement for my personal Branded Saturday! 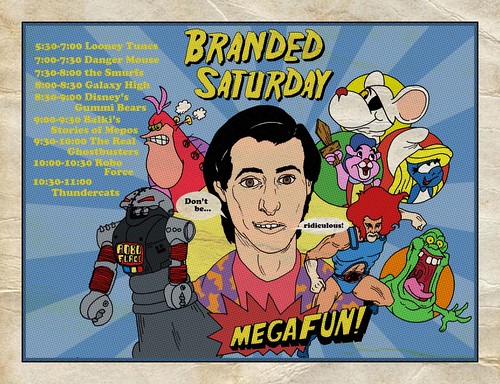 I tried to pick a range of stuff that I’ve been really into lately, as well as a fun mix of fantasy, sci-fi, action, comedy, and in the case of Balki’s Stories of Mepos, imaginary shows that I wished existed.  I picture the Balki show being a cross between Pryor’s Place, Reading Rainbow and Pee Wee’s Playhouse where Bronson Pinchot would play his character from the Perfect Strangers sitcom narrating all sorts of fun stories from his imaginary homeland that could be visualized as live-action skits and animated shorts.  I also wanted to include some Nickelodeon stuff like Danger Mouse, and some more obscure stuff like Galaxy High.  Also, in my dream world Robo Force graduated from the single Sunbow pilot episode to a full blown 13-episode series.

As far as the inspiration I drew on for the fake SMC ad I created, here are a few that immediately spring to mind… 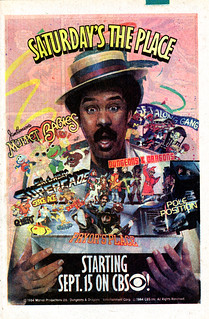 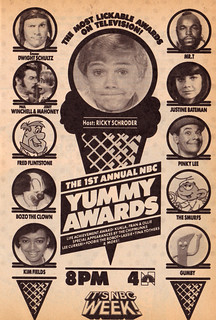 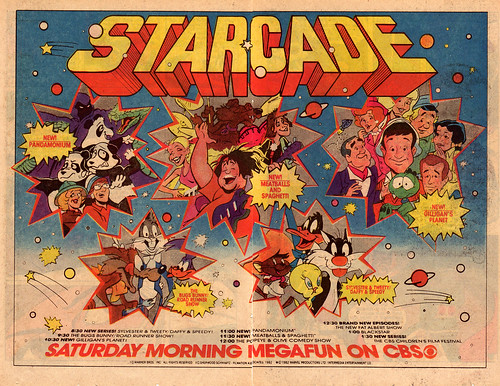 Last but not least, here’s a black and white variation of my ad that would have run in the Fall Preview issue of TV Guide… 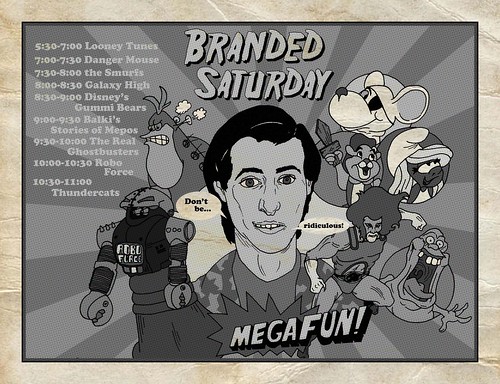 Have a second? Why not check out some of the other League members to see how they weighed in on this week’s assignment!

Jaime, Shezcrafti, keeps the action amped up all morning long!

The Goodwill Geek, Goodwill Hunting 4 Geeks, picks some obscure gems from the 80s!

Jason, Rediscover the 80s, is all about themed cartoon blocks!

Dan, Of Flying Monkeys and Ewoks, Oh My, picks a lot of my favorites from the 80s!

Dex, AEIOU and Sometimes Why, put a lot of thought into his themed hours!

Michael Knight & the Mystery of K.I.T.T. and the Blue Prowler!

The All New Branded in the 80s Podcast, Episode 4!

A whole week of day passes…