It’s been awhile since I dipped into my collection of old advertisements I clipped from my collection of 80s era Woman’s Day magazines, so I thought it would be fun to take a look at one of the crazier ads from 1983.  Alright, raise your hand if you’ve been to a Ci-Ci’s or Stevie-B’s pizza buffet.  C’mon, I know we’ve all tried it at least once, I mean quality aside, it’s the best damn pizza value in town.  Seriously though, for anyone who has eaten at one of these pizza buffets in the last 20 years you’ve probably noticed that they have all sorts of weird pizzas to please kids and parents alike.  Whether it’s the taco pizza (replacing the sauce with salsa and adding lettuce and sour cream as toppings) or the baked potato (sour cream sauce, topped with cheddar cheese and slices of baked potato), there’s usually some funky stuff to keep it interesting and as unhealthy as possible.  The craziest buffet pizza in my opinion is the Mac ‘n Cheese pizza which has a cheese-based sauce, pasta, and loads of extra cheese to boot.  Not only is it a little slice of heart-attack, but there’s enough carbohydrates in one slice to make the pickiest vegan into a diabetic.

Well, while flipping through a 1983 issue of Woman’s Day I found an ad that puts the Stevie-B’s pasta pizza to shame. How about a pizza where the crust is entirely made out of Kraft Macaroni & Cheese!?! 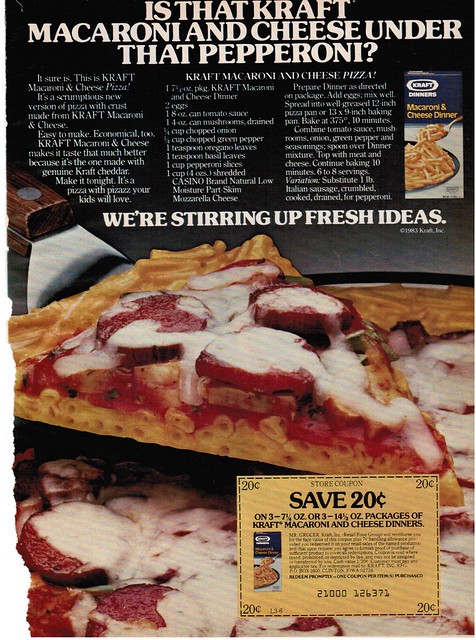 That’s right, who needs working arteries when you can taste the awe-inspiring scrumptiousness that must be a slice of pizza made entirely out of Mac ‘n Cheese!  I’m so tempted to make this monstrosity, but I’m not sure my mouth can withstand the insanity.  What were the ad reps at Kraft thinking when they came up with this idea?  I can only assume these are the same geniuses that convinced KFC that fried chicken would made an awesome substitute for bread in a sandwich.

So has anyone out there ever experienced this gastronomical indulgence?

GPK Halloween Countdown Day 25, You’ve got the Body, He’s got the Brains….