This week’s League topic is in response to last week’s Holy Grail & White Whale musings, and centers on what one prized possession we have that we would risk life and limb during a disaster to save.  I think this would be a pretty easy question for most collectors to answer, and I’d be willing to bet good money that most of these items would be relatively worthless on the monetary scale.  My guess is that it’s all about long-loved trinkets that have survived since our childhoods, and for me there’s no doubt that my most beloved possession is my Wicket W. Warrick plush from 1983… 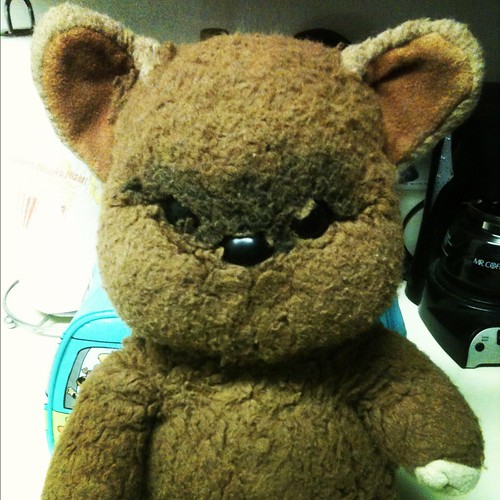 Horrible picture, I know, I need to get a real camera (or at least a better cell phone…)

This little guy has been with me for almost 30 years and has never left my bedside.  Say what you will about the Ewoks (or Return of the Jedi), but at six years-old they were the coolest thing to happen to the Star Wars universe since Chewbacca played keep-away with the Ugnauts.  I think an aspect of these characters that tends to get overlooked is that they make great vehicle characters for the audience of kids watching these flicks, not just because they’re huggable teddy bear aliens, but because there’s nothing super special about them.  They don’t have the force, they’re not 7 feet tall with incredible strength, and they don’t have their own intergalactic space freighter.  All they have is their cunning wits and crude handmade weapons and traps, and honestly, what kid (especially little boys) doesn’t spend hours trying to make their own slingshots, spears, and neighborhood booby-traps?  Yes, I’ll admit that this is the same questionable, pandering writing process that led us to a pint-sized annoying Anakin Skywalker in the Phantom Menace, but I’d argue that the Ewoks hardly mar the viewing experience in nearly the same way.  Regardless, I loved them, and when my mom surprised me one day with this little fuzzy fella I was in heaven. 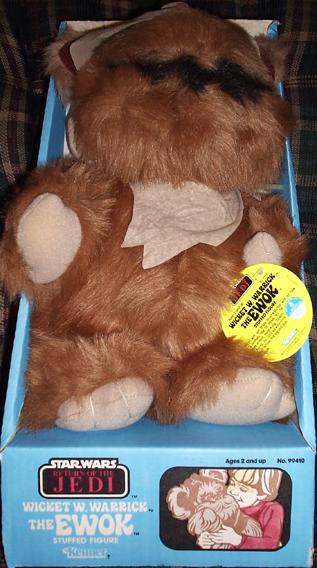 He’s a little bit the worse for wear these days as he’s been on a few trips through the washing machine (which, by the way, is why his fur is so short and matted) and at some point lost his cowl, but if it’s possible I love him more now than I did at six.  There were some turbulent years where we’d get into some crazy knock down, drag out fights, but we always made up in the end.  I’m being serious about the fights.  Watching the trailer for the movie Ted freaked me out by how accurate the relationship between a boy and his stuffed bear (or, er, Ewok) can be.

Also, as a topper to the story, I actually did run back into a burning building to save Wicket a few years ago during a horrible apartment fire experience.  I’ve lost a lot of my childhood along the way, but I can’t imagine not waking up to this little guy after all these years.

Some of the other League members have also weighed in with their prized possessions.  If you have a second, why don’t you check them out?

Ashley, Life with Fandom, talks about his original He-Man figure.

TL, Flashlights are Something to Eat, lets us listen to his childhood on tape!

One last Skeleton for this GPK countdown on Day 23!

Announcing Branded in the 80s, THE MAGAZINE!

The vacation is almost over, but there’s still more Muppet Magazine!