I think it’s safe to say that this is my favorite book ever!

Yesterday I opened the mailbox to see a package from Amazon and my heart skipped a beat. For well over 15 years I’ve been dreaming about the idea of my perfect coffee table book, and in that little brown box I knew it was about to become a reality.  For anyone who’s been reading the site for any length of time probably already knows, I’m a huge Garbage Pail Kids nut.  Collecting and trading those stickers was a very big part of my youth, and though my original collection was lost decades ago I still cherished my memories of those gross and funny sticker cards.  By hook and by crook I’ve managed to rebuild a pretty decent collection of the vintage GPKs, including a near complete series one set that I never thought I’d manage.  All the while though I keep hoping that one day Topps would step up and release a nice photo book that reprinted all the awesome artwork from the original 15 series.  Heck, at least the first three series would have been awesome.

A few years ago my hopes got a big boost when Abrams and Topps released the first two volumes of their Wacky Packages retrospective (Volume 1 and Volume 2); I mean a nice GPK book would surely have to follow.  Well, one of the wonderful editors at Abrams assured me that something was in the works, and for the past six months I’ve been dying to see the final product.  Well, the wait was finally over… 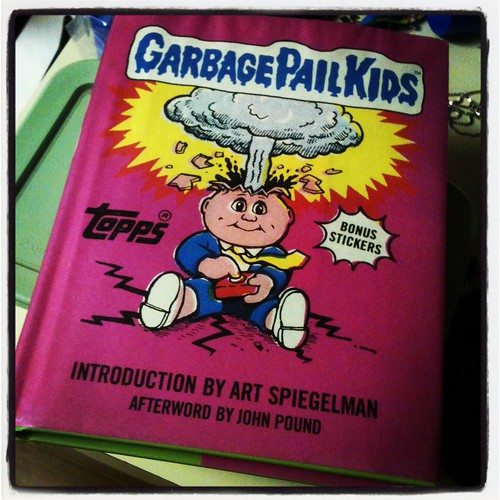 Needless to say I ripped through the Amazon packaging so that I could finally put my hands on this coveted Garbage Pail Kids  tome and it’s pretty much everything I could ever want in a coffee table book.  This volume reprints the first five GPK series (206 separate paintings in all) which covers the initial boom of the phenomena.  There’s a forward by series mastermind Art Spiegelman that gives a nice overview of how the original series came about, and a short but sweet afterword by the original GPK artist John Pound which has some fun insights into his participation as well.  This book isn’t about the history of the stickers though, it’s all about a gorgeous presentation of the cards themselves.  In that department I think the book is amazing with only a few caveats in the missed-opportunity department. 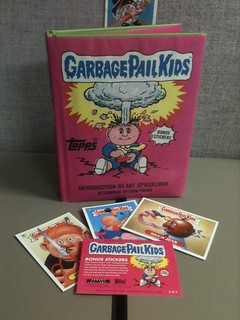 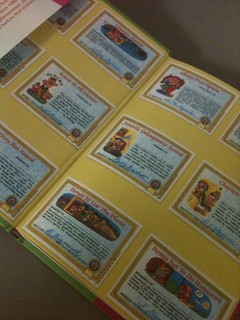 First and foremost, the volume is beautifully designed in the same fashion as the Wacky Packages books, including a wax paper dust cover (which is still a very clever detail) and various bits of GPK collecting imagery (empty sticker backs, empty card boxes, stale sticks of chewing gum, and examples of the first five wax packages.) T he artwork of the cards themselves is presented pretty close to the actual size of the original paintings if I’m not mistaken, which is a very nice touch as well.  There was also a lot of care in how the “sister/brother – A& B” naming of the cards was represented, as well as working in imagery from the checklist design, and a handful of the series one Nutty Awards cardbacks.  There are even 4 included stickers that never made it press in any of the original series (for various reasons, but mostly due to overly violent imagery is my guess.) 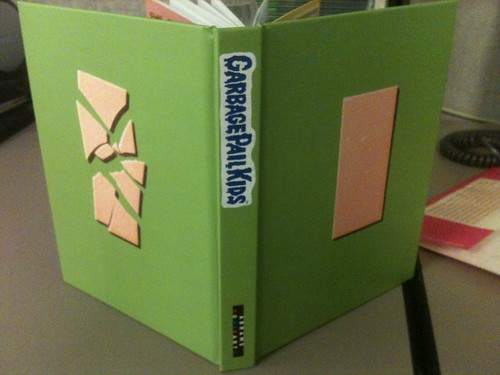 There are a couple details that I think would have been nice to see though.  Since part of the deal with Topps was that the artists didn’t sign their work, it would have been nice if the various artists had some sort of attribution by each piece in the book.  Granted, John Pound did all the sticker artwork for the first two series, but Tom Bunk joined in on series three, and for those not versed in telling the two artists apart it would have been a nice touch.  The other thing that I would have wanted to see would have been a better representation of the cardbacks for each series.  As I mentioned above, there are a handful of the series one Nutty Award backs on the inside front cover of the book, but there aren’t any from the remaining 4 series in this volume at all.  Even if there were only a couple sampled at a smaller size in each chapter it would have gone a long way to completing the experience of collecting these sticker cards in the book.  Again, not a huge complaint, just a missed opportunity. 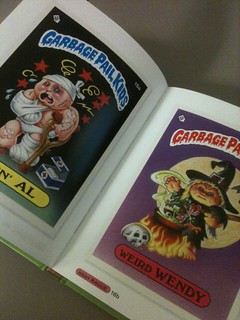 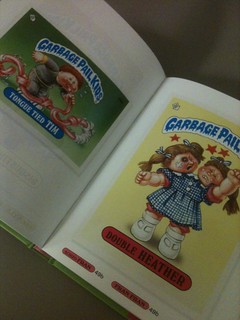 All in all though, I am so excited that this Garbage Pail Kids book finally exists and is sitting here right in front of me as I type this.  I’ve already flipped though this book 10 times and I still kind of can’t believe it’s actually real.  I know that may sound like hyperbole, but it’s true.  The only thing that could top this would be seeing two more volumes collecting the remaining ten vintage sets in the near future. Abrams, are you listening?

Spiriting the Nerd Lunch crew away to the world of Miyazaki!