I’m going on The Quest!

One of my favorite pastimes since creating this site is seeking out old magazines from the 80s looking for hidden gems from the decade that I think are worth talking about.  Be it old advertisements for forgotten food like the Frankenstein’s monster-influenced, chili-stuffed hot dogs (Frank’n Stuffs), or insane ads for Back to the Future-themed Power Wheel DeLoreans, there’s always something fun to uncover.  Recently while flipping through some old issues of Billboard magazine I stumbled upon an advertisement for a kid’s movie that I’d never heard of before.  Now I’m not the end-all be-all encyclopedia of everything 80s, but I did experience my fair share of what the decade had to offer kids, in particular film-wise.  With the exception of a handful of made-for-TV flicks here and there, I think I’ve seen most of the kid’s flicks from the decade.  Or I thought I had, until I saw this awesome advertisement for The Quest… 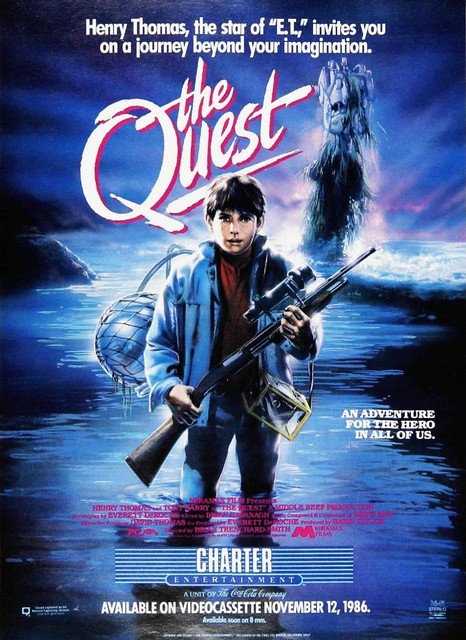 Why did I never stumble across this VHS cover while combing though the various video rental joints of my youth and teenage years?  The flick star’s E.T. and Cloak & Dagger’s Henry Thomas as an orphan living in the Outback with relatives after his parents pass.  Emboldened by the local legends of a lake monster named Donkegin, Thomas gears up and goes on the hunt for the creature.  Right now that’s about all I know about this flick (well, that and that The Quest is the American title for this Aussie flick which was originally known as Frog Dreaming.)  I’ve found this flick in various forms on Youtube and I’m super excited to watch it asap.

I’ve never really done this on the site before, but I thought it would be fun to try and share the process I go through while looking for content to write about.  In this instance, I’ve found a badass advertisement for an unseen flick from the 80s, and I’ve tracked down a copy to watch.  I wanted to share this portion of the excitement, which is mostly the unknown and potential for finding another awesome kid’s flick from my youth.  Will the movie live up to the potential and hype of this ad, or will it be an utter let down?  Some of you have probably already seen this flick and know that answer.  But I’m about to find out, and hopefully I’ll be able to share my thoughts next week after watching The Quest.

I mean come on, it’s Elliott with a shotgun hunting the down-under equivalent of the Loch Ness Monster!  How can this not be awesome?

Wax Paper Pop Art #21, Where no Spock Mego figure has gone before…