Branding and nostalgia, what keeps me buying…

Since I’m so enthralled with the pop culture of my youth, it can get kind of dicey when navigating today’s modern boom of 80s and 90s nostalgia with any sort of cost-conscious mindset.  10 years ago, when I first started reaching back into my childhood, there weren’t many options as far satiating my need for 80s stuff.  Either I hit up eBay and tried to buy back some of my memories, or I could scour the internet looking for tiny image files of cartoon screen captures or poorly recorded mp3s of sitcom theme songs.  It’s partly because of this that I started Branded in the 80s.  If I was going to drop 15 bucks on a sticker-themed magazine from 1985, I wanted to make sure it was readily available for others as well.

Over the past decade the options for nostalgia addicts has exploded like an atom bomb.  Actually, more like an Adam Bomb.  Released by Topps back in 2003, The All New Garbage Pail Kids sticker cards were one of the first big product lines cashing in on the fondness for the 80s.  Like the re-launch of the Masters of the Universe line the previous year, these GPKs featured new artwork and concepts (though yes, some were taken from the original 16th series that never saw print back in the day) and provided more than just fresh stickers to procure, it provided fans a second chance to experience the heady feeling of procuring this stuff.  I’ve written about this before, but half of the fondness we have for this pop culture stuff was in the experience of discovering it.  Finding it, buying it, and collecting it.  It’s not just the artwork on the stickers, it’s the wax wrappers and gum they were packaged in.  The shared cultural experience of chewing hard stale sticks of gum, of walking into a gas station or pharmacy and finding your first packs by the register; it’s the memories of begging your parents for money to buy them and then the idle time spent day-dreaming about the future where you’d spend all your money as an adult on Garbage Pail Kids and junk like it.

When I first walked into my local gas station back in 2003 and I saw a full, fresh box of the new GPK stickers I had to do a double take.  I had no idea these were coming out, and I couldn’t believe they were sitting there on the counter.  I actually got giddy as I scooped up the entire box and had to sit and wait while the cashier scanned each individual pack.  I was finally getting a chance to be that “adult” that I day-dreamed about becoming as a kid.  In the grand scheme of things, this isn’t all that important, but at the same time, these experiences don’t come all that often so it’s best to relish them when given the opportunity.

Again, fast forward a few years and the opportunity to buy 80s era nostalgic pop culture junk has exploded, and these days you really have to be picky where you plop down your 30 bucks to try and relive your childhood.  I’m definitely not complaining about the glut of stuff that seems marketed directly to me, but I’ve also kind of become numb to the new breed of 80s branded incarnations that surround us on a daily basis.  Do I really need that box of Smurf Cereal just because one side of the box has a passing resemblance to the Smurfberry cereal of my youth?  Do I really need that snap-back billed ball cap that looks like an extreme close-up of Kermit the Frog’s face?  How about that ironic T-shirt with the cast of Sesame Street that says “Raised on the Street”?  Monster Cereal or He-Man branded Hot Wheels?  Back to the Future Mini Mates?  Hyper-realistic Beetlejuice action figures?  G.I. Joe Resolute DVDs?  Probably not.  But there are some things that catch my eye that I can’t pass up, and 9 times out of 10 it has to do with the packaging and presentation of the product.  Case in point, and going back to Topps and the Garbage Pail Kids, there’s these new GPK magnet and candy sets… 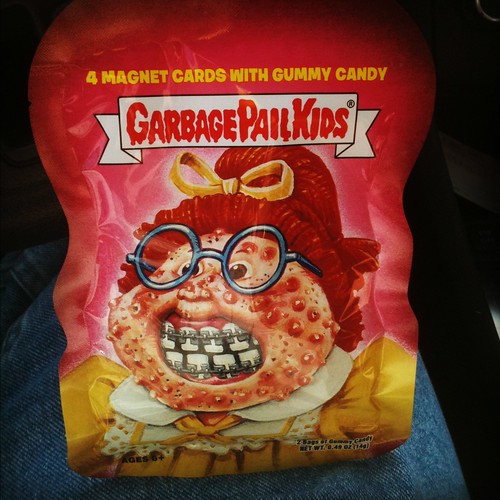 While out at my local Toys ‘R Us the other day I spotted these on a kiosk at the front of the store.  John Pound’s Acne Amy artwork is super iconic to me because it was a card that I saw a lot when I first got into GPKs back in the 80s.  Though I entered around the time the 3rd series was on store shelves, there were rack packs (holding the equivalent of three packs of cards, two 3rd series and one 2nd series) on the shelves that seemed to always have an Acne Amy (or Ghastly Ashley) on top viewable through the clear cellophane.  This new set of magnet cards is available in 4 different packages ($4 each), with either Ghastly Ashley, Potty Scotty, Beastly Boyd, or Adam Bomb on the front.  I’m kind of surprised the designers didn’t go with Dead Ted or Evil Eddie, but they’re all still iconic images that immediately evoke the GPK branding, specifically images that would relate to the adult collector.  The packaging is even cut I such a way that it resembles one of the original die-cut stickers peeled off of the backing.  As soon as I saw them I knew I wasn’t leaving the store without one of each package. 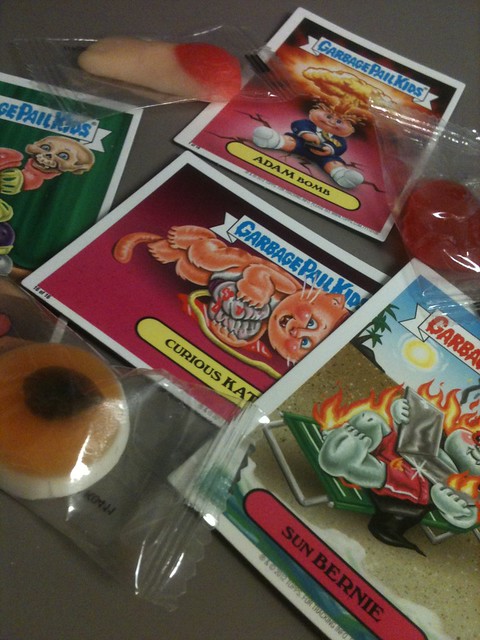 I thought it was interesting that I recently read that Michael Eisner had procured Topps, and looking at projects like these magnet cards, I can kind of see the sort of thing he was doing with Disney back in the 90s.  Can’t say for sure he was involved obviously, but love him or hate him, he did revitalize Disney’s branding.  Back to these magnet cards, I thought it was interesting that nostalgia was the ploy used to get the prospective buyer to snag a bag of these.  Of the 16 cards in the set, only four are from the original vintage sets, the same four that are on the packages.  In a smart sorting decision, each pack comes with one of these vintage magnets (matching the packaging.)  So this was a nice way of satiating the nostalgia bug with keeping up the collectability of the set to keep you buying more.  Out of four packages I am still missing three of the new designs for instance.

On a final note, if you pick any of these up, don’t bother unwrapping and eating the included gummy candy.  Much like the hard sticks of dried out gum that came with the original sticker cards, these body part-shaped gummies are just about inedible.  I guess it’s almost better that way.