As a kid I completely missed out on the whole M.U.S.C.L.E. men craze as I was concentrating all my playtime and allowance money on Garbage Pail Kids stickers and G.I. Joe & Transformers figures.  It’s not that I wasn’t aware of them, or how cool the little rubber guys looked packaged in their clear trashcans and bright blue blister cards; it’s just that I was spread a bit thin collecting-wise.  “A kid can’t have everything…”, is a statement I heard my mom say a lot at the time.  So I satiated my young mini-figure cravings with Transformers Decoys, Smurfs, figural erasers, and the old Blackstar demon or Trobit.

Years later, after the majority of my toy collecting cravings have more or less subsided, I find that the one thing that I can’t bring myself to stop collecting are little mini-figures.  Whether it’s Hasbro’s mini Heroes lines (aka the Star Wars, Transformers, and G.I. Joe chub figures), vending machine toys (like Little Homies), or Lego Minifigs, I just can’t help myself if I find something particularly cool.  This past June I stumbled across the October Toys OMFG! (Outlandish Mini Figure Guys) project on Kickstarter and I was immediately hooked on the idea.  A bunch of artists and sculptors in the October Toys forum came together to hash out some ideas for a line of mini-figures riffing off of the nostalgia for old toy lines like Battle Beasts, M.U.S.C.L.E.s, and Monster In My Pocket.  Enough folks backed the project for it to be successfully funded, which was cool, but then began the wait for the figures to actually be produced… 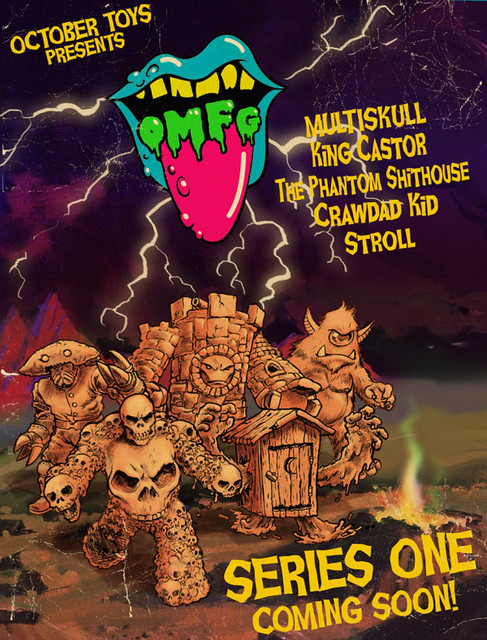 I finally received my two initial sets from the Kickstarter project last month, and I couldn’t be happier with the outcome! 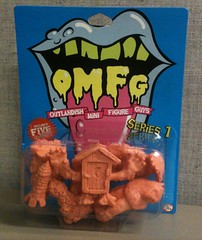 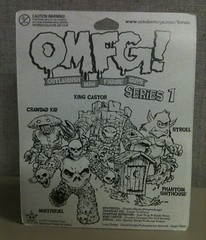 There are five figures in this first series, Multiskull, King Castor, The Phantom Shithouse, Crawdad Kid, and Stroll, all of which have some excellent sculpting and detail work.  Again, though I never had any M.U.S.C.L.E.s growing up, I’ve seen enough of them to know that they weren’t rendered in this much detail.  The main set comes in a “flesh” colored PVC, but there was also a Kickstarter exclusive black set that I picked up as well.  The wife called dibs on King Castor and Stroll, but she doesn’t have any of the nostalgia or fondness for the pink fleshy figures, so black seemed the way to go. 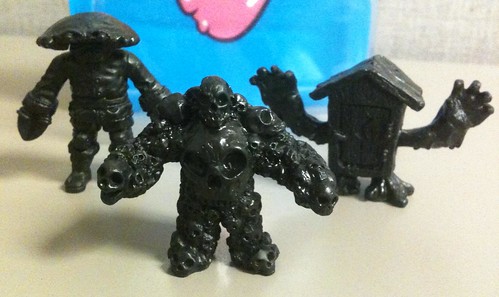 Part of the Kickstarter campaign was the ability to help fund at a high level to secure a thousand minifigs in your very own color-way.  This was a great idea to get other small toy companies and stores in on the fun with the ability to sell exclusive color variants of the figures as an incentive for investing in the project.  There were four groups that chose this option resulting in a few exclusive colors including a mustard yellow (University of Muscle), a lime green (Little Rubber Guys), a true blue (Rotofugi), and a lighter “Glyos” blue (Onell Design).  There was also a sixth exclusive color-way/artist-proof, hot pink, that was split between the artists and sculptors that worked on the project. 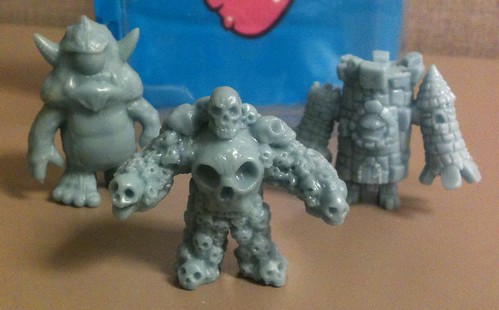 Before Christmas, while waiting for the base and Kickstarter sets to be shipped, I noticed that the Onell Design light blue color-way was available for purchase.  Since I was champing at the bit to get my hands on these, I went ahead and splurged on this variant set.  Besides, I thought it would be fun to give a couple of the figures to my nephews for the holiday.  The Onell variants were my first taste of OMFG!, and I had a sneaking suspicion that even after I received the pink and black that it wouldn’t be my last.

Ripping open the light blue set I realized that the variant color-ways that the various companies chose didn’t seem to have too much thought behind them at first blush.  Granted, no one color would easily represent the figures, so this is hardly a complaint, just an observation.  Onell chose the light blue as it’s the first color they used when creating their own toys a while back, but for this set it really doesn’t fit with the design of the actual figures.  King Castor looks the best, as it has a cold icy feel that works decently with stones that make up the figure, and an argument can be made for Stroll being a “yeti” variation, but it’s a little off.  The flesh being an homage to M.U.S.C.L.E.s makes sense, but again it doesn’t really fit any of the figures.  The black exclusives, though cool, are almost too dark to really fully appreciate the detailed sculpting, and I began to wonder why each variant color was chosen.

After receiving the two additional sets from October Toys, it occurred to me that there might be some thought behind these choices after all.  The logo design of the series, the Rolling Stones-esque open mouth and tongue design is comprised of five colors (green teeth, pink tongue, yellow lettering, blue lips, and black outlines and fill in the mouth.)  Could it be that the colors were chosen to reflect the overall scheme of the packaging?  What with the two blues (the lips being offset by the blue of the background) and the two pinks (the tongue and the OMFG banner below the title), all of these colors were present and accounted for.  Could be a coincidence, but I thought it was interesting to point out. 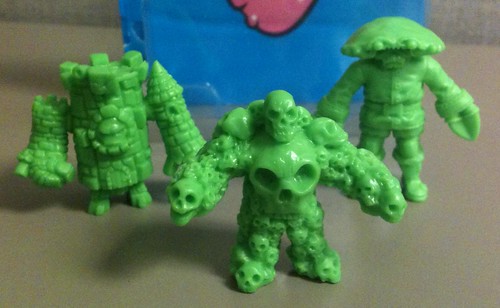 Though I thought I would stop at the three sets, I soon found that I was really loving all the color choices (whether they made design sense or not), and I ended up picking up the green set, as well as the yellow and artist proof exclusive hot pink of the Multiskull figure (which is my favorite of the bunch.)  I even snagged a custom painted version of Multiskull that the artist (Charles Marsh) put up for sale a couple of weeks ago.  I had really wanted a version of the figure in white or grey, the traditional skull colors, and managed to score the NightFright custom which fills this gap in my collection quite nicely.  He even glows in the dark! 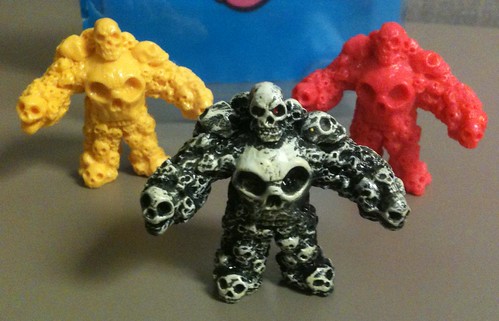 All in all I really love these figures and I can’t even being to put into words would cool it’s been to watch this project from design to fruition.  Seeing an independent artistic community come together for a project like this is rare, and seeing it come out so well done is even rarer.  October Toys and their forum are doing the initial prep work on a second series, and submissions for figures ideas are still open until the 29th of this month.  I have a few designs submitted (Boombox, Miss Pucker, and Killscreen), but there are all sorts of cool figures in the forum thread that would make an awesome second series for the OMFG! line.  Can’t wait to see how far the community will take this thing!

From the Archives: The Pee-wee Herman Muppet Magazine edition…

Shaking the Pillars of Heaven…