Coming back off of a hiatus always feels a little herky-jerky, what with trying to dig up some inspiration and cleaning off the cobwebs of my practically non-existent HTML skills.  This year was a little different in that over the last few months I’ve been bombarded with all sorts of cool things to write about.  One thing that I’ve been meaning to write about for awhile is the new book by Kirk Demarais, Mail Order Mysteries: Real Stuff from Old Comic Book Ads!  For those who don’t know, Kirk runs the Secret Fun Spot (as well as its weblog the Secret fun Blog) and is a freelance artist and designer who has been doing some amazing colored pencil portraits of some very familiar families of late.  He’s a regular contributor to the Gallery 88 shows and an all around swell guy.  Though I’ve never gotten the chance to meet him, he’s had a pretty big impact on Branded from the get-go, so when I saw that he was having his second book published I was pretty excited. 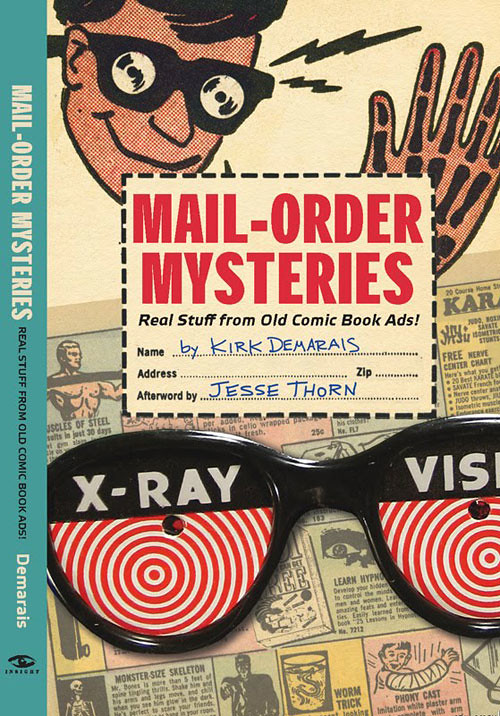 Mail Order Mysteries is the logical progression of nostalgic blogs, talking a niche topic and really digging into all the nitty gritty (sometimes literally into the Grit of gritty.)  Do you remember all those tempting ads in the backs of comics and magazines like Famous Monsters?  You know, the ones for the $2 Topstone rubber monster masks, the life-size Frankenstein’s Monster, or the footlocker full of 100 toy soldiers for only $1.25.  Well Kirk sure does, and he’s spent years tracking all of this stuff down, finding out what all this stuff was really like and cataloging his findings in this beautifully written and designed tome. 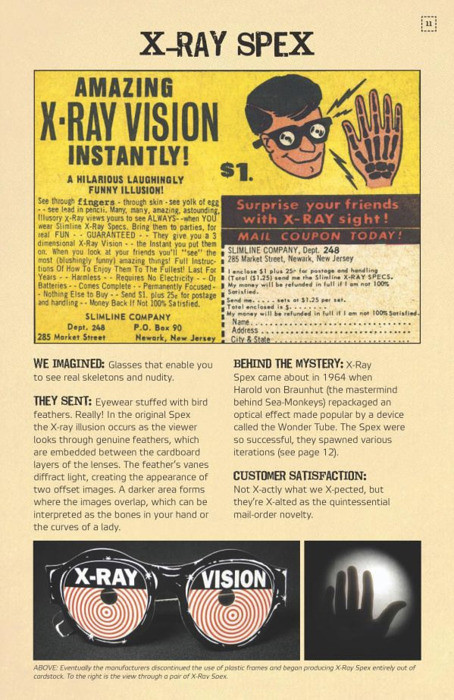 The book is divided up into 8 sections including superhero related stuff, war junk, monster merchandise, monkey making schemes, mail-order miscellanea, secret stuff, jokes & gags, and all kinds of oddities.  From the facts behind the fabled X-Ray Spex to what that $7 Polaris Nuclear Sub was really like, every single page of this volume is filled with the highs and lows of the mail-order products of the 50s through to the 80s.  Kirk lovingly photographed over a hundred pieces (most from his own collection), as well as including scans of the original advertisements so you can judge for yourself whether or not that allowance was or would have been well spent.  The icing on the cake is Kirk’s keen eye for design, both modern and retro, which can be felt all over the book, from the yellowing, newsprint color-scheme of the pages, to the hidden glow-in-the-dark embellishments on the covers and spine. 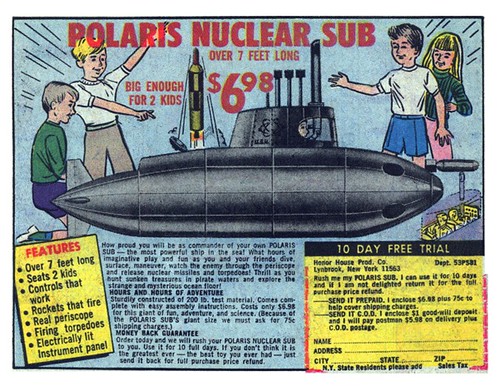 For those of us who never got a chance to be lucky enough to order our own cardboard Polaris Sub (or to feel swindled by said sub), to join one of those intoxicating selling for prizes clubs like the Olympic Sales Club, or for those who just want to know how those darn X-Ray Spex work, Mail Order Mysteries is the perfect book.  You can see some more preview pages at Kirk’s site.

Adapting the Watchmen, what is the point?

Return of the 31 Days of Monsters, Day 7: Mayan Dragon Demon!

Being Re-Gifted My childhood, Part 1