Swimming in the League’s Moneybin…

So last week I participated in the inaugural week of “The League“, a themed writing assignment that is the brainchild of Brian over at Cool & Collected.  It was really fun to tackle a topic, and then to see what all the other participants had to say about the subject.  Surprisingly, there was very little cross-over in terms of content, much like the Countdown to Halloween participants, which I thought was pretty darn awesome.  Lots of different perspectives weighing in on some shared pop culture.  The second question/assignment is now live, which asks the question, what one piece of Hollywood memorabilia would you acquire if budget and space were not an issue.

After sitting back to ponder the question for a bit, there were a couple of ideas swimming around in my head that were kind of hard to choose between.  On the one hand I’ve always had an obsession with helmets, hats and masks in pop culture, and I’d love to have the same sort of helmet-dispensing contraption that was in the M.A.S.K. team headquarters in Boulder Hill, except instead of just the M.A.S.K. helmets it would have a varied assortment of headgear that I love.  I’m sure there’d be helmets and masks from Airwolf, Star Wars (a Stormtrooper and Leia’s Boushh disguise in particular), that Charlie Sheen movie The Wraith, General Kael’s mask/helmet from Willow, Captain Power’s helmet, and probably even that really weird one from Videodrome (I did say it was and obsession.)  Thinking about it though, it seemed to skirt around the framework of the question with way too many items, not just one. 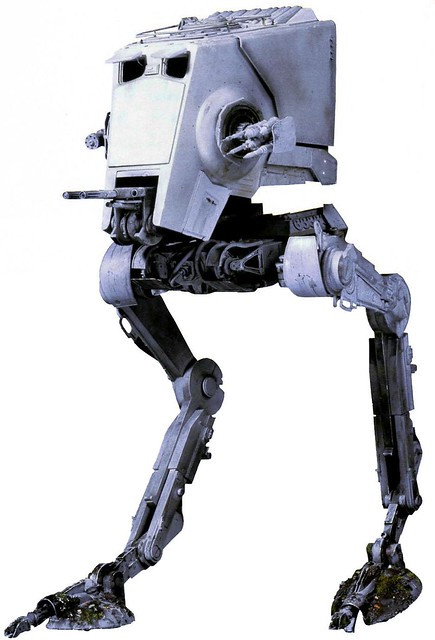 My other thought seems to be more in line with the parameters of the question, which would be a full-size replica of an AT-ST Scout Walker from The Empire Strikes Back and Return of the Jedi.  The idea is that this chicken walker would make for a perfect backyard “tree fort”.  Something I always wanted as a kid but never managed to really make work was some sort of clubhouse/fort for my friends and I to hang out in and plan our daily neighborhood gallivanting.  I’m sure it stems from loving flicks like The Monster Squad and the Goonies (I mean Mikey’s house might as well have been a clubhouse.)  There were a couple of attempts, but nothing ever got past the elaborate illustrations in our school notebooks.

It also reminds me of the Return of the Jedi Jungle Gym playset advertisement I shared a couple years ago.  Now that I’m looking at it I’m wondering if that was the intention of the designers that worked on it, as it kind of resembles an AT-ST in a way… 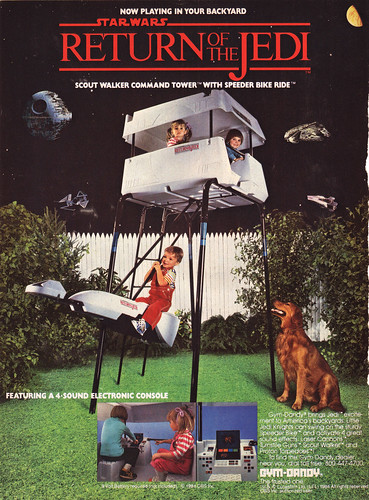 In doing a little bit of research on the internets, I see that there are some enterprising fathers out there that have had this same idea and have tried to give their children the ultimate tree forts.  Bravo! 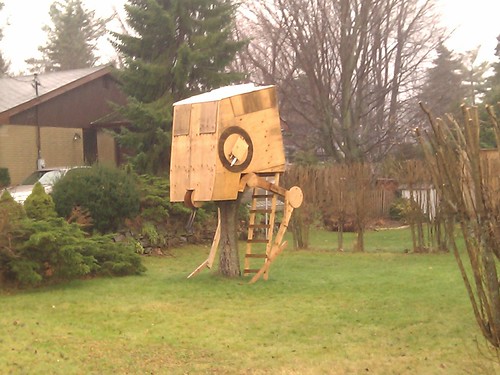 (Attribution on the above picture was very hard to nail down, apologies to the original poster.) 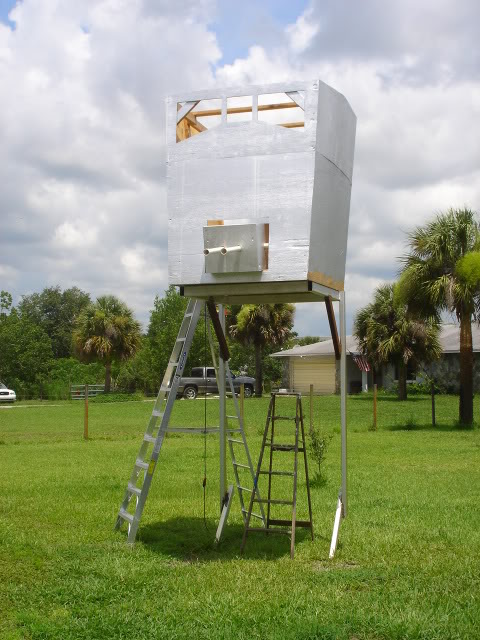 Makes me wonder what ever became of some of the full-scale sets that were built for the ROTJ film.  Did anyone get to take those home I wonder?  Anyway, a man can dream (about 40-odd-foot-tall, two-legged, mechanical walkers equipted with dual watergun cannons, and a flip-top hatch!)

Here are some of the other League members talking about their dream acquisitions:

Nat, Nat – Not Nate – Dot Net, talks about the Thunder Road from The Explorers

TL, Flashlights are Something to Eat, talks about the Trolley from Mr. Roger’s Neighborhood

Gina, MercanStyle, talks about Ms.-Piggy-on-a-bike from The Great Muppet Caper

Dex, AEIOU and Sometimes Why, talks about Flynn’s lightcycle 2.0

Reis, The Lair of the Dork Horde, talks about his 5 favorite pop culture rides

The Goonies are Good Enough…to have a Score released…