This book will give you a sugary nostalgic high!

One aspect of the American pop culture experience that I find endlessly intriguing is how certain portions of it so completely subvert class, race, religion, and creed.  It’s hard these days to pin down someone’s race or religious beliefs based solely on the music they listen to, or the video games they play. We’re becoming more and more eclectic as a nation, but the foundations of this cultural oneness has been steadily built over the last century with some unlikely materials.  If I had to point to one thing that ties most Americans together it would have to involve food as it’s something we all need.  Through the lens of pop culture, it’s the brands that stand out, the merchandising, packaging, and promotion that we are attracted to and hold dear.  One product over all else really shines through this lens, and is not only an important part of our shared pop culture experience, but also a very important part of one’s daily breakfast, Cereal!  It’s sugary, sweet, fruity, colorful, corny, wheaty, full of rice, oats, and the occasional marshmallow marbits.  It provides fiber, iron, whole grains, and most importantly for those seeking to break through the walls of the time-space continuum, high levels of riboflavin.  Through over a century of ad campaigns, commercials, and cool prizes we’ve all been influenced by breakfast cereal, and now writers Marty Gitlin & Topher Ellis have taken a shot at condensing this shared snap, crackle, and pop culture experience into The Great American Cereal Book. 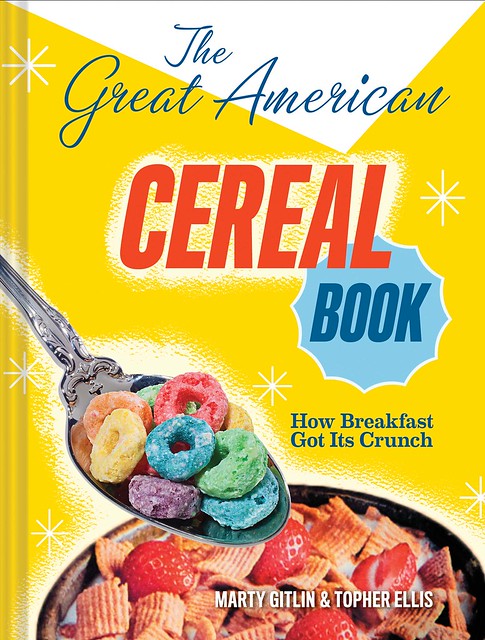 Published by Abrams (for a February 1st release), this beautiful volume chronicles America’s favorite breakfast food with a semi-chronological listing of ready-to-eat cereals from seven of the largest manufacturers of the last century including General Mills, Kellogg’s, Nabisco, Nestle, Post, the Quaker Oats Company, and Ralston.  Each product listed features some vital statistics including a description, when it was introduced and/or discontinued, the various popular slogans, characters and endorsements associated with it, as well as various tidbits and trivia.  The book is also heavily illustrated with beautiful color photos of many of the more popular and eclectic varieties.  Breaking up the timeline of sweet crunchy nostalgia are a bevy of lists, essays and mascot profiles including a glimpse into the development of characters such as Cap’n Crunch and the Trix rabbit.

What really struck me when I first cracked the cover on this massive tome was the high level of thought and care put into the presentation.  The design of the book is absolutely gorgeous and has a perfect tongue-in-cheek humor imbedded into every page.  The book resembles a box of cereal, from the hilariously placed nutritional chart and ingredients list on the spine, to the rainbow variety of cereals adorning the inside front and back covers.  This book was envisioned and designed with those that are truly a kid at heart.  I also love that the photos lean more towards the kid’s section of the cereal aisle, including so many of the sadly extinct varieties like Smurf-Berry Crunch, Pac-Man, Batman, C3PO’s, and the dearly missed Croonchy Stars (the Sweddish Chef’s Muppet-themed cereal from the late 80s.)

Abrams really has their finger on the pulse of nostalgia when it comes to their line of books aimed at pop culture fans, whether it’s their inventive layout and design of their “vault” editions (like the World of the Smurfs and the Transformers Vault), or their stunning art books (like Wacky Packages, More Wacky Packages, and the upcoming Garbage Pail Kids book.)  The Great American Cereal Book is a fine addition to their lineup and would fit nicely on anyone’s shelf or coffee table who grew up glued to the television on Saturday mornings watching cartoons and slurping up a huge bowl of Cap’n Crunch or Fruit Loops.

Going Back to Next Saturday Morning…in 1985!