Well folks, the month of October is almost upon us, and before I slip into a daze of daily ghoulish shenanigans, I thought I’d squeeze in one more PCP update.  I feel very lucky to have gotten a chance to meet a bunch of people because of this website and the projects it’s led me to, but there are still a handful of folks I’ve yet to meet in person.  Of these people I’d really like to get a chance to say hello and give a hearty handshake to is the one and only Ted Seko! 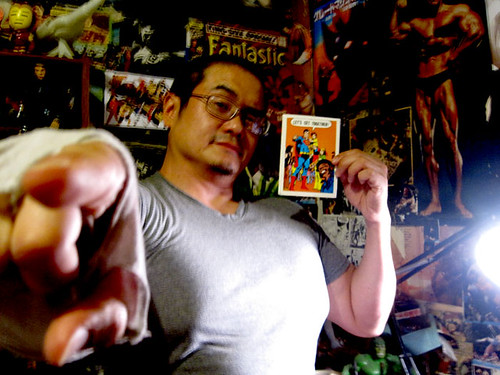 Probably one of the most sincere and thoughtful people in comics, Ted is really one in a million.  I’ve been listening to his creative process podcast, the Idiot Engine, for almost three years now and I’m always taken by his perspective on creating comics and telling stories.  He’s also one hell of a cartoonist, both in comics and animation.  His style is energy and excitement personified in a way that’s so much more instinctual than a lot of his contemporaries.

I could literally gush about this man’s work for hours, but I wanted to point to how much of a mensch Ted is when he pitched in to help out the Up! Fair last year.  We had put out a call to artists and friends about donating pieces of art for a gallery showing and an auction to benefit the show and Ted surprised us all by sending in a one of a kind comic book that was completely illustrated and bound by hand.  And it was awesome.  That was way above and beyond and it’s just another example of how cool this guy is.

If you get a chance, I highly suggest heading on over to download some episodes of his podcast, watch some of his cartoons, and take a look at his artwork.  This guy is the real deal!

Because I don’t have the time anyway…