Here’s my second and final Monkey Goggles article that was originally published a little over a year ago on the Archie McPhee literary webzine.  As I mentioned yesterday, I’m putting these articles up here as it seems that MG isn’t going to be publishing any longer and in case that site fades away I’d like to have a record of the article.  This piece centers on the differences between the final cuts of films and the book adaptations of the screenplays those films were based upon. T he main example I use is the novelization of E.T. and how it could have been, and in the novel is, a much darker story.  You can also find my thoughts on the sequel story, E.T. The Book of the Green Planet, that was never made into a film, only published as a stand alone novel…

In the realm of film novelizations, there’s rarely room for originality, but every once in a while these books can be a treasure trove of interesting material.

Novelizations were originally a brilliant marketing scheme to bring a sense of weight and establishment to otherwise light genre flicks, at least in the case of the print editions of stories like Star Wars.  It’s rumored that Alan Dean Foster was hired to ghost-write the novel in George Lucas’ name so that the film would have the “literary” background of at the time recent hits like Mario Puzo’s The Godfather and Peter Benchley’s Jaws.  Later, in a pre-home video world, these novelizations became a merchandising phenomenon, giving hungry audiences an outlet for reliving their favorite films and breathing new life into genre publishing.

The novelization of E.T. sold more than one million copies and gave a generation of fans a glimpse into an alternate view of the story that almost was.  The original idea behind the movie was not to make a tranquil boy-loves-alien adventure, but instead a darker, more sinister sequel to Close Encounters of the Third Kind.  Originally titled “Night Skies”, the story centered around a malevolent race of aliens that land on earth and besiege a family living on a farm.  Though there was a script written by John Sayles, Spielberg eventually decided that he didn’t want to produce a violent extra-terrestrial sequel to Close Encounters, and instead broke up the script, reusing aspects that what would eventually become story points in later Spielberg productions — namely Poltergeist, Gremlins, and E.T. 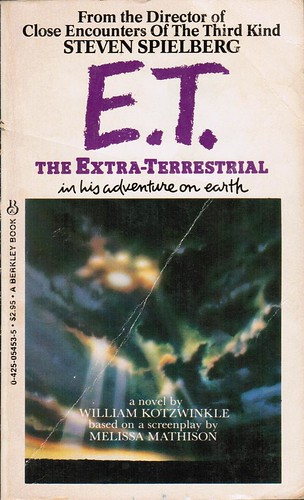 Though the character of E.T. became much tamer in the eventual film, author William Kotzwinkle had a much deeper and slightly darker tone in mind when he was commissioned to pen the novelization.  First and foremost, the book contains a fascinating shift in the story’s point-of-view.  Whereas Spielberg chose to ape Charles Schultz’s child’s height world-view perspective, rarely showing the faces or upper torsos of adult characters and basking in the wonderment of a kid’s point-of-view, the book instead takes on a more omniscient angle.  Instead of approaching the alien from Elliott’s perspective, we are instead invited into the mind’s eye of E.T. himself, seeing Earth as it appears to him.  He loses the infant-like quality that made him so loveable in the film, and is instead imbued with the sage wisdom of a ten million year-old wanderer.

One of my favorite moments in the novelization is when, E.T. plays the role of the audience for a second, and it gives the author an opportunity to provide some commentary on Spielberg’s filmic charm.  Kotzwinkle has E.T. strolling out to the edge of the redwood forest where the aliens have landed at the beginning of the film.  After securing a sapling for examination and cataloging, E.T. is enraptured by the lights of the suburban neighborhood sitting at the foot of the valley.  Knowing that this is going to be their last visit to Earth for centuries, E.T. lingers, longing to peek into the windows of the homes, to get a glimpse of the human middle class life.  Again, it’s just a bit of commentary on what makes Spielberg’s early work so special.

It’s also interesting that, with this shift in viewpoint, certain aspects of the story take on a much darker tone.  At the beginning when the humans come to the landing site and start searching the woods, we’re introduced to “Keys”, Peter Coyote’s nameless scientist character who is known in the story by the jangling key-ring on his belt.  When E.T. sees him for the first time, the keys are described thus: “…the old botanist saw the man’s belt, with something hanging from it like an assemblage of teeth, jagged-edged, trophies possibly, wrenched from the mouth of some other unfortunate space creature, and placed on a ring…”  A bit later, the author has E.T. describing the circular key ring as a sort of open-mouthed grin with jangling teeth.

There’s also an isolationist’s tone to the opening of the novel. E.T.’s species survive for millennia and have cultivated a vast knowledge as well as a Zen-like understanding of peace and harmony, yet they refuse to attempt to communicate with the humans, instead centering all their attention on Earth’s flora because they are afraid of being ridiculed and mocked.  It’s a very odd and dark way to approach the material, for sure.  E.T. was Wall-E before there was a “Wall-E”.

Another interesting aspect that Kotzwinkle either added to the “E.T.” universe or amped up from the script was the idea of the alien race being so closely connected to plant-life that they not only communicate with it, but also have the ability to physically manipulate it. It’s either that, or that plants defy their normal physics in their presence. In the opening scene when the humans have descended upon the landing site and E.T. is trying to get back to the ship, there are trees that lift their roots to trip the pursuing earthlings, while a patch of emotionally-clingy weeds hold the alien back, wanting him to stay with them. It exudes a passion for the story that goes beyond simple script adaptation, which I think is rare in these 1980s era movie novelizations.

Who would have thought that there’d be room for this sort of storytelling in what amounts to simple movie merchandising in a decade known for its hollow commercialism?  I honestly didn’t think there was anything left for me to learn from a story I grew up with and thought I knew so well. Never in a million years did I think I’d get so sucked into reading the E.T. novelization that I’d be skipping lunch breaks and desperately wondering what happens next.

The All New Branded in the 80s Podcast is back!