So I recently caught the first couple episodes of the newly relaunched ThunderCats cartoon and it got me in the mood to break out the first season of the original show on DVD and watch a bunch of episodes.  Sort of like the Transformers posts last month, I figured I’d run through a bunch of scenes and aspects that I found interesting.  Before I get to that though, I wanted to say that I’m enjoying this new series even though I think it’s making some very weird choices story-wise.  For the most part I really like the changes the writers have made to the back-story, picking a relate-able age for Lion-O, ignoring the Superman origin of escaping the destruction of Thundera, and introducing some familial ties to the characters; heck, even tying in Mumm-Ra to the legend of the Eye of Thundera feels like a move in the right direction of making sense of the enormous amount of ideas presented in the original series. T here are some odd aspects to the story though, that I feel just don’t work.

First, the concept of treating “technology” like magic, as if it were some mystical unknown fairytale, is just weird and goes against the logic of what technology is.  With magic, which is heavily prevalent in the world of the ThunderCats in both series, there is no real basis for why it works or exists because it’s completely fictional and a product of fantasy.  There’s no science or reason to it, it just is.  Technology on the other hand has its roots in reality, in the simplest of tools (levers, wheels and inclined planes), and even though a graphing calculator might be light years ahead of an abacus, it’s a natural progression of the concept.  Granted the tech introduced in the show is of a more advanced and alien design than what we currently have in the world, but it’s not to say it’s stuff that out of the realm of possibility.  It’s the science fiction aspect of the series.  So to treat technology as if it were a fairy tale, a part of fantasy, though interesting, just seems like a plot device full that’s at odds with itself by the very nature of the difference between science fiction and fantasy.

The other weird plot point is that at the end of the first episode we’re left with a group of ThunderCats that are more less seeking vengeance for the destruction of their kingdom and the murder of their people and king.  Don’t get me wrong, I love a good vengeance/revenge story, but I think it’s the wrong way to frame a story about heroes.  The Punisher, the Bride from Kill Bill, Lone Wolf and Cub; these characters aren’t heroes and are beyond redemption.  It’s a weird choice to frame the ThunderCats story with this sort of anger and intensity.  Not only does it possibly lead to unjustifiable actions by the “good” characters, it’s also hard to keep that intensity going over the course of an extended series.  Either every story has to tie into Mumm-Ra and the revolt of the Mutants, or there’s going to have to be a pretty darn good reason to stray from the path to have a stand alone story without it feeling like a waste of time.  The beauty of a lot of 80s era cartoons was that they were set up in such a way that you could go anywhere with the characters.

Well, anyway, that’s how the new show’s introduction came off to me.  Getting back to the original series and the point of this article though, first thing’s first, let’s get the naked cat out of the bag so to speak.  By that I mean…

Why were the ThunderCats freaking naked in the pilot episode!?! 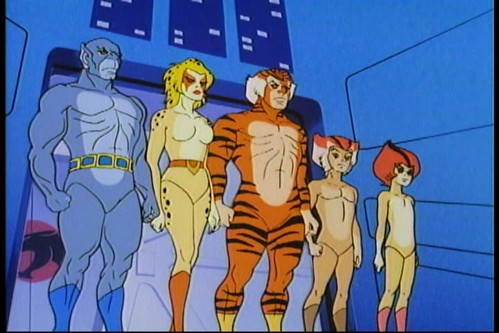 I have absolutely no idea why Leonard Starr (the pilot’s writer) or the guys in charge of production on this series decided it would be a good idea to introduce the ThunderCats as a race of seriously naked cat people.  Not only are the characters naked, but they don’t even have any distinguishing genitalia.  They all have creepy Barbie Doll crotches and it’s just weird and disturbing.  I mean I know there is a history of anthropomorphized cartoon animals that aren’t wearing clothes (Porky Pig’s missing pants anyone), and I understand that there are plenty of mammals in nature that just have the fur on their backs, but this goes beyond that.  Way beyond that… 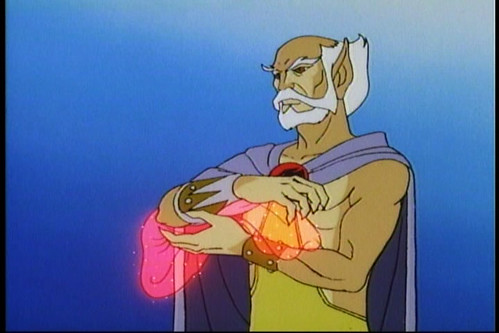 I mean there’s even a point where Jaga takes all the characters aside and gives them each magical clothing (and weapons) stating that “…on our planet you needed no protective clothing or special weaponry…”.  My question then is why is Jaga wearing clothes from the very beginning then?  I almost get the vibe that Jaga’s been traveling off-world or something, which he may very well have, but from a design standpoint it’s just really wonky.  Maybe it was the writer’s intent to showcase the characters getting fancy new uniforms, but then why not introduce them in some common bland tunics or something that they eventually change out of? 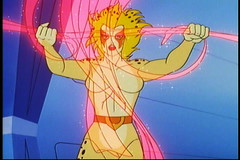 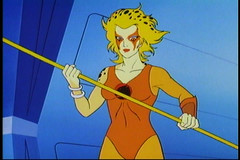 Honestly, it probably wouldn’t seem so weird if the character design on all the ThunderCats didn’t allude to the idea that their faces, chests and neither regions aren’t covered in fur. Or the fact that though naked, they’re all wearing boots.  It also doesn’t help seeing scenes with Kit and Kat, or a naked Cheetara waking up a very young, naked Lino-O.  Maybe it’s just me, but seeing naked women and adolescent young boys and girls in cartoons for kids is just wrong… 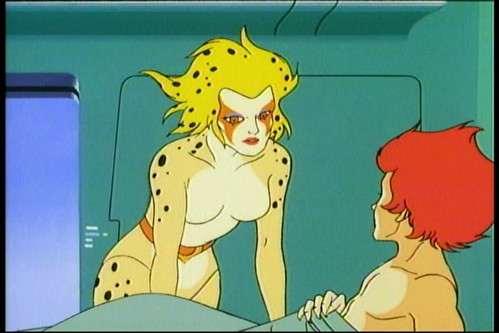 Speaking of weird decisions in the pilot episode, why did Lion-O grow to full adulthood while in the suspension capsule? 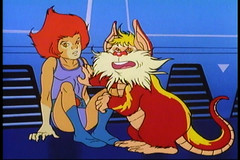 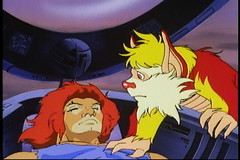 While preparing for the long journey to Third Earth the ThunderCats are ordered by Jaga to make the trip in a series of suspension capsules that will slow their aging and enable them to survive the trip.  He mentions offhand that some aging does occur, but when their ship crash lands on Third Earth Lion-O has grown to full adulthood and it’s treated like an anomaly.  What’s weird is that none of the other characters seem to have aged at all, including Wiley Kit and Kat who were roughly the same age as Lion-O.  Again, I have a feeling the writers and/or producers wanted the character to be like a child in a man’s body who has to learn to lead the ThunderCats, but their choice to age him up with no real reason was just weird.  How hard would it have been to write a quick segment that showed his capsule being damaged somehow?  I mentioned above that one of the cool aspects to 80s era cartoons was that they were usually set up in such a way that nothing was off the table.  The guys and gals who put this show together really took that to heart though, and these sorts of decisions, to age Lion-O, etc., really point to that freedom to try anything (even if it doesn’t make sense.) 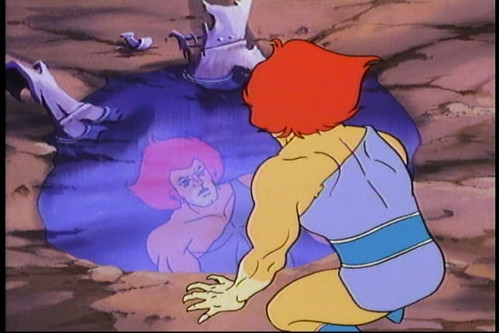 I completely forgot that Wiley Kit and Kat were just as likely to shred some waves as the Autobots and the Teenage Mutant Ninja Turtles! 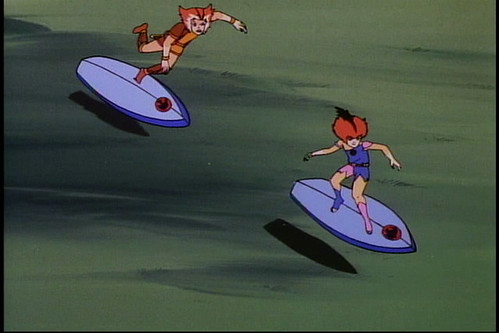 One of the first things that Panthro creates for Wiley Kit & Kat are surf/hover boards to give them a little bit more mobility and something to do.  Growing up in Florida it was really hard to not be inundated with the surf and skate culture of the 80s, but I’m not sure how other areas of the country reacted to it.  After moving up to New Hampshire at the end of 1989 I was shocked by the lack of T&C, Billabong, and Maui surf and skate T-shirts at school, and I even ran into some kids that didn’t know what surfing was.  Watching these cartoons though, it’s really weird to see the surfing trend popping up so often.  It makes me wonder how many of the other series feature it? 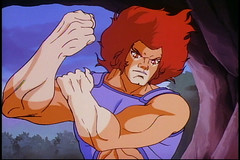 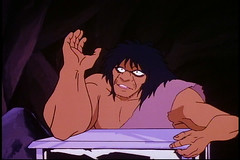 In Episode 15, The Time Capsule, Lion-O is getting a bit depressed and home sick for Thundera.  At the same time he doesn’t remember all that much about it and Jaga appears to him and mentions that part of their ship’s cargo was a Time Capsule that contained the collective knowledge of Thundera.  The ThunderCats go on a quest to seek out the capsule and Lion-O eventually finds it in a cave, though it’s now apparently been claimed by a caveman that isn’t going to give it up without a fight.  Actually, he won’t give it up unless Lion-O beats him in the most macho of all manly contests, the arm wrestling match!  It’s like watch an animated version of Over the Top, just with no estranged children in military academy, eating cigars and drinking motor oil, or big rig trucks. 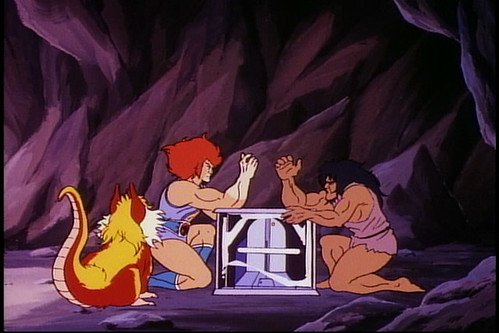 The last thing I wanted to bring up today is an aspect of the series that’s very close to my heart, the amazing amount of branding in the cartoon! 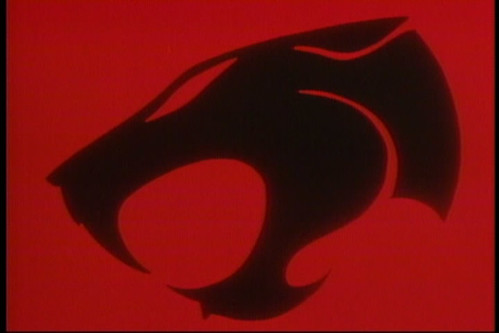 Not that long ago I met a guy though my day job that used to play with the Misfits back when the band was still coming together for the first time.  I have a Misfits messenger bag, and he noticed the Crimson Ghost Skull logo and we got to talking about how amazing it is that over thirty years later there are still kids picking up stuff stamped with that image.  Heck, though Jerry Only has been trying his damnedest to keep the band going, most people really only dig the original stuff when Danzig was a part of the band, and that’s been over for about 25 years.  Yet still, that iconic skull has power.  If there’s one thing that came out of the commercial design of the 70s and 80s, this type of powerfully iconic branding was it.  The Autobot and Decpticon symbols, the Ghostbusters logo, Pac-Man, the Atari Logo, the Nike Swoosh, and the ThunderCats logo are just a few of the hundreds of popular logos that are still around to this day.  This show really took this banding to heart and you can see it in almost every aspect of the design from the vehicles… 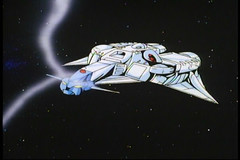 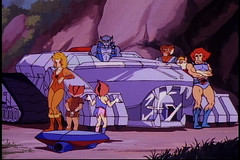 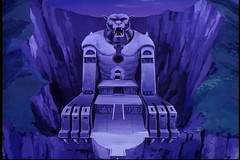 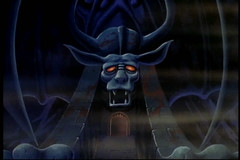 …and even the villains. Mumm-Ra’s logo, though almost as iconic as the cat’s head logo, is actually the one aspect of this sort of branding in the show that was really underused.  I’m surprised, seeing as how Mumm-Ra is basically the leader of the Mutants, that they weren’t all sporting the entwined snakes on their outfits, vehicles and gear.  This is actually something addressed in the new series that I really loved. 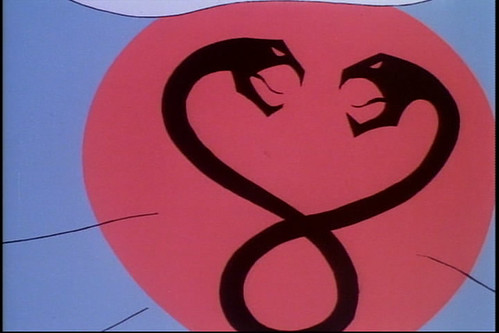 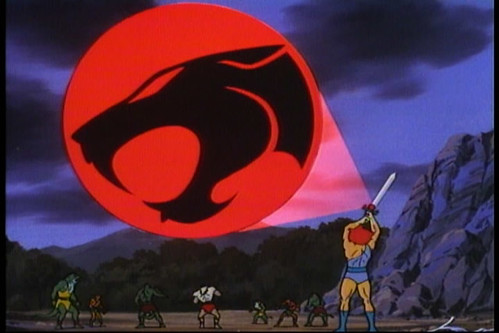 So not only is the logo plastered on every building, vehicle, article of clothing, etc, it’s even an integral part of the narrative.  In my opinion this is hands down the most brilliant use of branding in a cartoon during the 80s.

Well, come back next week for part 2 of this article where I’ll be talking a look at some of the ThunderCats characters, the crazy designs, and more.

A Great Way to Help Us Kickstart the Up! Fair…

It’s the End, the End of the Century

Day 30 of the Halloween Countdown: Souvenir Magazines are like archaic DVD special features…