90s era SNICK is coming back, and I hope it brings Pete and Pete with it…

Did you know that Nickelodeon, based on fan outcry, was planning to bring back a chunk of their early 90s original programming back to the network?  Starting Monday night TeenNick will begin airing a block called “The 90s Were All That”, which will feature episodes of Doug, All That, Kenan and Kel, and Clarissa Explains It All.  They’re also launching a new Facebook page that’ll let viewers vote on 90s era programming for possible inclusion in the block (hoping to see Pete & Pete, Rocko’s Modern Life, Nick Arcade, and Double Dare.)  If it wasn’t already evident, I tend to find nostalgia fascinating, and now that we’re breaking into a new decade it seems like the kids who grew up in the 90s are starting to get the same pangs to revisit the wistful days of their childhoods that I was suffering from back in 2001.  I’ve already noticed a bunch of 90s era ephemera and branding popping up on websites and in stores, most notably with the initial crop of DVD sets of cartoons and teen shows from the era.  Through Amazon’s MOD DVD program we’ve already seen a bunch Nickelodeon shows like Doug, Rugrats, and Ahhhhh! Real Monsters, but just recently Shout! Factory announced they were going to start distributing these along with some new to DVD content like my personal favorite Hey Dude.

I was recently interviewed by Jessica Goldstein of The Washington Post about why there’s so much interest in these 20 year old Nickelodeon series, as well as why those shows in particular tend to hold up so well.  You can read the article here, or click on the image below. 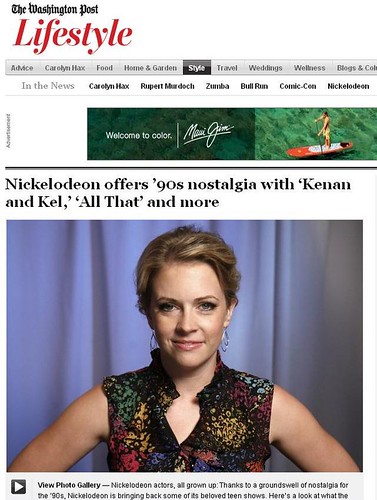 Personally, one of the reasons that I think Nickelodeon shows were so cool, especially back in the early 90s when the channel started producing a ton of original content for the first time, is that the network had a very interesting viewpoint dating back to its inception in the late 70s.  First, most likely in an effort to save money when it first launched, Nickelodeon ignored the typical American programming standards and sought to distribute mainly international programming (mainly from Canada, but also from France, Japan, the U.K and other countries) that had a vastly different and less hindered take on children’s programming. Coming off of this broad worldly influence and bolstered by the ideal to provide shows that felt like they were made for kids, by kids, the network concentrated on creating content that felt like nothing was off the table.  The shows catered to the idea that anything was possible, which is a viewpoint that most adults lose along the way, but it’s something that kids never forget.

I’m really curious to see where this fan initiated change in programming will lead, as it’s a step away from the older network standards of relying on outdated ratings structures that don’t represent the audience’s viewing habits like they did 40 years ago.  These days people want their content on their own terms (DVR, DVD, streaming, etc.) and it’s kind of cool to see Nickelodeon going outside the comfort zone to see what their audience really wants to watch…

Clearing the guilt cache, or Fortress Maximus is the MAXIMEST!