Taking a closer look at Season 1 of the Transformers…

I’ve spent the last five years building a library of cartoons on DVD and sometimes I fear that I get too caught up in acquiring new series and not spending nearly enough time actually sitting down and watching them.  Since it had been awhile, I decided to devote an entire afternoon of my recent vacation to planting myself on the couch and getting reacquainted with the first season of the Sunbow Transformers cartoon, a feat that I haven’t attempted since I was in middle school.  I’ve always been more apt to watch the 1986 film than the actual series that proceeded it, and over the years I’d forgotten how many of the little things that I loved about those first 16 episodes.  I thought I’d talk a bit about some of the highlights over the next week or so…

So, first things first, can the Autobots fly? 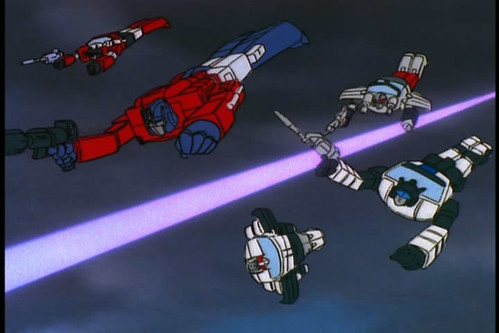 For some reason I was always under the impression that one of the things that separated the Autobots from the Decepticons was the enemy’s ability to fly, regardless if they had some sort of aircraft for their alternative mode.  In fact some of the most common scenes from the series are consist of a sky full of Decepticons either flying into the extended opening to their hidden sea base or while retreating from battle.  But the Autobots on the other hand seemed to very rarely take flight, and when they did it seemed to be limited to Sideswipe or Sunstreaker (the two flashy Lamborghinis of the team) who had jet packs.  That concept always made sense to me since the Autobots mainly consisted of cars and trucks while the Decepticons were an assemblage of jets, birds and insects.  If nothing else, the Decepticons alt modes are fashioned after war or spy-influenced devices and it kind of makes sense for them to have powers above and beyond the heroes.

So I was taken aback a bit by the first few episodes that showcase the entire Autobot team flying into battle.  This is the kind of storyline continuity debate that really brings the nerdiness out in the fandom, and honestly it’s something easily explained by the differences in cartoon writers ideas and how difficult it is to create a consistent set of rules and guidelines when creating a fictional universe.  I’m not sure whether flight was addressed in the Transformers series bible (developed by the story editors and show creators to help the writers keep the series consistent), but my guess would be that writers like George Arthur Bloom and Donald F. Glut wanted/needed the characters to fly for the scenes they were working on and so they didn’t hesitate in making that happen.  I can imagine it’s a pain to have to constantly flip through the bible while writing a script, and I doubt at the time that they were considering that people would be watching these episodes almost 30 years later. 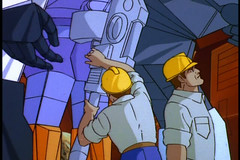 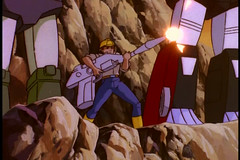 When the Decepticons come calling the Autobots are usually there to stand up and fight, but every so often they’re just too damaged or scared to carry on the fight.  That’s when it’s Spike’s time to shine, and these scenes usually involve him grabbing one of the Autobots oversized laser guns and then comedically hoofing it into battle.  There’s something really absurd about these scenes, and it’s not the huge blaster he’s toting and firing, but the fact that the Autobots let him get that involved in the battles.  This is the kind of weird logic-defying writing (employing a relatable vehicle character for the audience to feel connected to) that bugs me a bit about the cartoon, and honestly it’s one of the main things that keep me from enjoying the recent big screen adaptations.  I’m watching the Transformers to see giant robots square off, and all the human drama tends to get in the way.  Don’t get me wrong, it can be done well, just look at the original Japanese Godzilla film, but there are times when it’s just a bunch of whining and overly implausible situations that take me right out of the story.  I do have to admit that Spike’s passion to fight the good fight gets to me emotionally; I just wish it didn’t typically involve hefting a blaster that’s bigger than his own body…

Energon Cubes = the Flashiest MacGuffin ever! 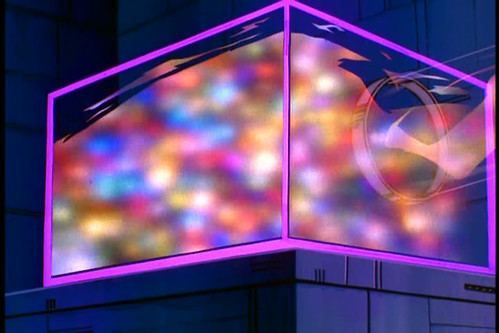 If there’s one thing I’ve learned from re-watching these episodes it’s that Megatron wants his damn energon Cubes, and like right NOW!  Every single episode revolves around the Decepticon tyrant devising a plan to manufacture energon Cubes, be it stealing energy from a power plant, tapping into the Earth’s core, or utilizing an antimatter formula.  And in every single episode his plans are thwarted, the energon Cubes are destroyed, and it’s back to the drawing board.  What I never understood as a kid was why the Autobots weren’t on a similar quest to find the fuel they need to replenish themselves and to get them back home to Cybertron.  If energon is the fuel that these sentient robots need in order to survive, wouldn’t they all need it regardless of political stance or faction? 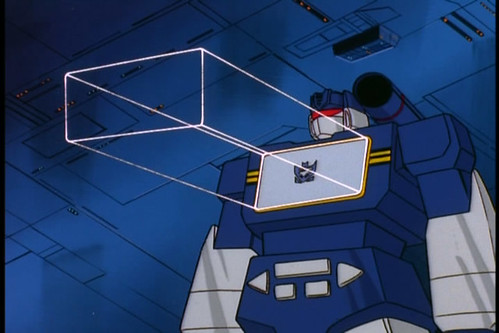 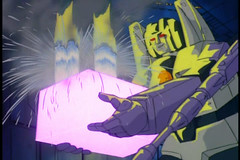 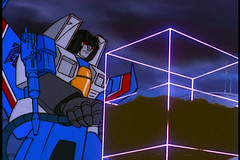 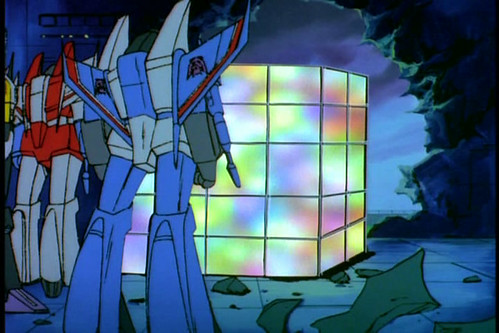 Regardless, I love how crazy and versatile these cubes are.  Typically created by Soundwave out of his tape-deck chest, the cubes are clear and empty until filled with some form of energy (from fire and lightning, to oil or ever the energy released by volcanos and natural disasters) after which they turn into a rainbow of flowing back-lit colors.  It’s one of the most stunning light and animation effects in the series, and it certainly helped to define and differentiate the look of the Transformers series from other syndicated action fare of the 80s.

Wait … Hauler?  I thought his name was Grapple, and he didn’t come until later! 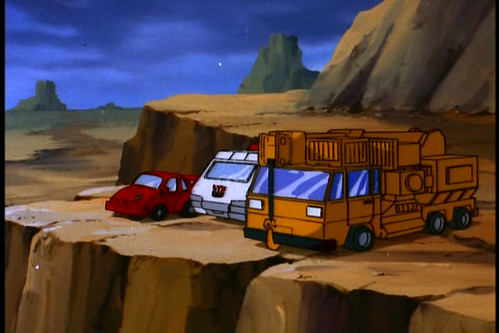 One of the things that I was really curious about when re-watching these episodes were which characters appeared and when.  I’ve read in interviews with some of the Sunbow story editors that Hasbro wasn’t overly restrictive in terms of trying to match up characters that were on the toy shelves to those in the current episodes, but then again there was that idea to kill off the majority of the original Autobots and Decepticons for the ’86 film to make room for all the new movie characters on the toy shelves.  From what I can gather though, all of the characters present in the first season were part of the first two waves of toys from 1984-85, and most were from wave one.  The wave two exceptions were the Dinobots, Skyfire, the Insecticons and the Constructicons, all of which were special and more or less had specific origin stories.  Well, except for a character named Hauler who shows up in the first episode only in his alt mode.  What I find strange about this is that Hauler would later appear as the character Grapple both in the cartoon’s second season and in the second wave of toys.  I’m sure George Arthur Bloom, the writer for this episode, included the character in the script with no thought to the release schedule of the toyline, probably after seeing a variation of the toy or box art.  I always find these little mistakes in continuity interesting though…

Reflector, generic Decepticon clone or just as cool as Soundwave? 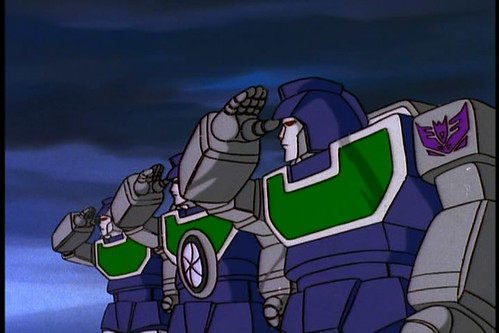 Finally I wanted to talk about another odd character from the first season that I feel never really got a fair shake, the Decepticon Reflector.  Though he, and by he I mean the three robots that speak in conjunction and make up “Reflector”, gets plenty of screen time in the first sixteen episodes, there’s something awfully generic about his character design that tends to keep him in the background.  I think a big part of this is that he is comprised of three robots that all look alike with the exception of the “main” bot who has different markings on his legs and has the lens of his alt mode camera on his chest.  Since repeated character designs are extremely common in the series (consider the Decepticon seeker jets Starscream, Skywarp, and Thundercracker or Ironhide and Ratchet), when you see a set that has the same color scheme and design it tends to make them feel like drones instead of main characters.  It also didn’t help that the character didn’t receive an American toy release until 1986, and even then only as a mail-away figure which made him even more rare. 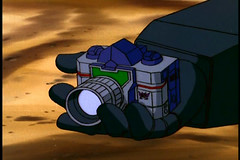 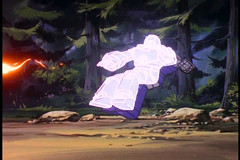 I find that this kind of a shame because when you stop and think about it, Reflector is just as dynamic and interesting as Soundwave, but not nearly as popular.  Both characters are comprised of multiple robots (if you consider Soundwave’s arsenal of cassettes), both transform into common household electronics (camera/tape deck), and both are commissioned by Megatron to spy on the Autobots.  Soundwave does have a leg up in that his voice (provided by the ever awesome Frank Welker) is a bit more interesting and iconic.  I think in the pantheon of Transformers characters Reflector is the one that got the shortest shrift and probably deserves a nice Classics redeco toy to be released.

Next week I’ll discuss another handful of topics that struck me including the characters pre-Earth designs, some more interesting and weird powers, and a weird plot connection to the new summer blockbuster Transformers 3!

Talking about some stuff I LOVE TO DEATH!