One night when I was about 4 years old my mother was helping me get ready for bed when she asked me a silly question, if I could change my name to anything that I wanted, what would it be?  This was the first time I was challenged with this sort of idea, of being given the power to create my own personality and identity.  Without much thought and with almost no hesitation I declared that I wanted to be named Tiger (most likely because I loved He-Man’s steed Battle Cat.)  15 years later I was taking my first plunge into the world wide web and was again presented with the question of picking a name, an identity that would be my handle in that brave new technological community.  I was barely an adult at 19 and was living on my own for the first time.  When thinking about how I wanted to represent myself online there was one thing that I wanted to point to when it came to identity, a childlike wonder.  If there was one thing I knew for sure it was that I’d never stopped feeling like a young boy and I’d since had enough distance from the glamour of barbarian and giant cat fantasies I wanted to come up with something a bit more meaningful to my experience as a kid.  Upon reflection there was a much more iconic and universally identifiable property than the Masters of the Universe that encapsulated what it was like being a kid in the eighties, The Smurfs.  For anyone familiar with the odd linguistic tic of these little blue guys, you’ll certainly know their penchant for replacing nouns and verbs with the word “smurf”.  I settled on an adjectival use when picking my online handle, Smurfwreck (which is in homage to the final landing thud Brainy Smurf always made after being ejected from the village for being a useless know-it-all.)

30 years ago on a Saturday morning in 1981 I was introduced to the wonder that is the Smurfs, and though I didn’t realize it at the time these little blue creatures would burrow their way so deeply into my consciousness that I’ve been living with them ever since.  Though they were introduced by Belgian artist and entrepreneur Pierre Culliford (better known by his nom de plume “Peyo”) as side characters in his successful comic The Adventures of Johan & Pirlouit in 1958, The Smurfs (Les Schtroumpfs) helped usher in an amazing decade of Saturday morning cartoons for North American children during the 80s and have since become synonymous with the era.  Though the Rubik’s Cube might be the most iconic single item from the eighties, I would argue that the decade was personified by the Smurfs (coming out on top of the likes of Michael Jackson, Mr. T, and even ALF.)  Unlike the straight comedic or action cartoons, the Smurfs was one of a few series that really painted an interesting escape into the realm of fantasy that the whole family could get into. 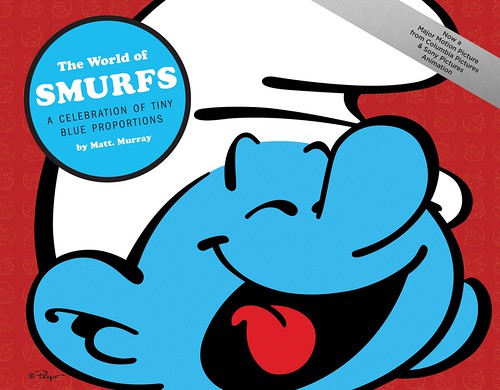 I wanted to talk about the Smurfs today because I recently had the opportunity to sit down with a copy of Matt. Murray’s (punctuation his) excellent new book called The World of the Smurfs, A Celebration of Tiny Blue Proportions.  This coffee table book published by Abrams (the same folks who brought us the wonderful Wacky Packages books) is unique in that it combines a beautifully illustrated look at the phenomena of the Smurfs with the styling of a scrapbook that includes replica mini posters, sticker sheets, replica animation cells and model sheets, as well as reproduction mini comics in the same style that the Smurfs were originally printed in the pages of Spirou in the 60s.  I first stumbled across this style of book with the Star Wars Vault (published by Simon and Schuster) that came out during the 30th anniversary of the first film, and this Smurf volume follows in the steps of another Abrams scrapbook, The Transformers Vault, which hit bookshelves earlier in the year.  Though these scrapbooks can evoke the feeling of reading a pop-up book at times, The World of the Smurfs strikes a nice balance between a book and a binder full of props.  It’s pretty darn cool to be able to pull out a replica animation cel while learning about the origins of the Hanna Barbera cartoon, or to unfold a detailed map of the Smurf village while reading up on some of the key characters in the universe.  It makes the whole experience one hundred times more visceral than reading a straight prose history, or even a heavily illustrated one.  For the generation of collectors that grew up in the 80s this style of publishing really taps into the nostalgia much in the same way that eBay and other auction sites have helped fans connect to ephemera from their past.  Here Abrams does that legwork for you.

Though the actual book reads pretty fast, not dwelling on any one topic for very long, Murray, the self-proclaimed World’s Leading Smurfologist, does a rather decent job of covering the history of the property and its creator without it feeling like a long wikipedia entry.  Actually if there was one thing that I felt was a bit lacking was that after reading through the book I wished there was a bit more coverage of the merchandising.  There are some very interesting images that show some of the various video games, food products and ephemera that aren’t talked about or really mentioned.  I also wanted to see more of the PVC figurines that have been produced over the years.  Even so, there are a lot of treasures to be found, in particular the artwork and pictures which dig a bit deeper than what you might find on the average fan site, illustrating the history with some personal photos culled from the Culliford family archive as well as the various Belgian publications that have most likely not seen print before in North America.  Included is also a look into the making of the Smurfs’ first foray into live action filmmaking which is set to hit theater screens later this month.

Overall, this volume is beautifully bound and presented and would make a great addition to the library of anyone who grew up during the 80s, in particular for casual fans of animation and the Smurfs property.  Hardcore fans will still enjoy the book, though they might find it lacking as a reference for the toys, merchandising, cartoons or comics.  After reading this volume I immediately did two things, ordered a copy of The Transformers Vault and put in the Season One, Volume Two Smurfs DVD to re-watch the Purple Smurfs episode (Gnap!)  If you’d like to pick up a copy of this book you can head on over to the Abrams site, or you can pre-order it from Amazon (it’ll be released on August 1st.)

The All New Branded in the 80s Podcast, Episode 3!

The new Target Halloween and some thoughts on commercialistic branding…