The Complete Bravestarr on a Budget!

**UPDATE** The winner of the DVD has been picked, Jody Y., and has been notified via the Facebook messaging system.  Thanks to everyone who entered and keep an eye out for some more cartoon DVD give-aways on Branded soon!

I’ve been lamenting a lot about the downturn the cartoon-on-DVD industry seems to have taken in the past couple of years, but lately all that gloom and doom has been forgotten as a metric ton of new-to-DVD and catalog titles have been announced.  Leading the pack is Shout! Factory, who have managed to snag some of the more popular franchises in the last few years including G.I. Joe and the Transformers.  Having just announced the impending release of the complete version 1 of M.A.S.K. and the Japanese Transformers – Headmasters series, as well as the long-awaited re-release of Jem, Shout! is making fans of 80s era cartoons very happy.

As happy as I am to see these titles released, I’ve also been keeping a close eye on the folks over at Millcreek Entertainment who have also been very busy with a slew of re-releases of out-of-print Filmation classics as well as a bunch of other slightly more obscure cartoon releases.  In addition to picking up a bevy of the oop BCI Eclipse titles like He-Man and the Masters of the Universe, Defenders of the Earth, and Dungeons and Dragons, Millcreek has also partnered with Cookie Jar to start releasing some great new-to-DVD titles (including the stop-motion Paddington Bear shorts and the Get-Along Gang) as well as some other re-releases such as C.O.P.S. and The Littles.

I’ve been on the fence about how I feel about Millcreek’s sets.  On the one hand they’re one of the last few DVD production houses bothering to license and release older cartoons, but on the other they’re concentration on slimmed-down budget releases leaves a lot to be desired at times.  Today I’m going to take a look at one of their newer re-releases, the Complete Bravestarr 7 disc set… 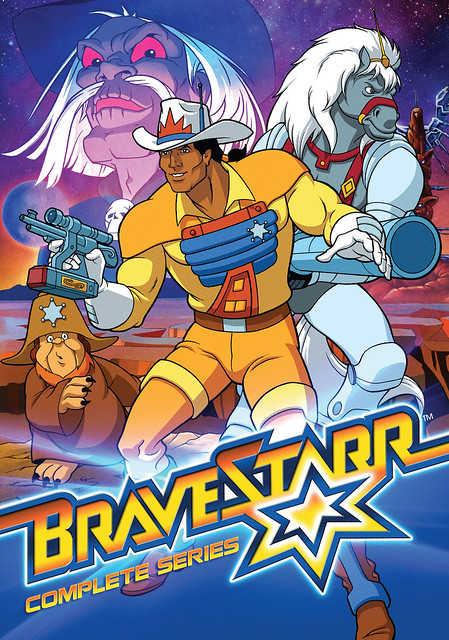 First thing’s first, the term “complete” is pretty relative.  For fans of the Filmation Bravestarr cartoon, complete doesn’t just refer to the 65 syndicated episodes of the series, but also the theatrical film, Bravestarr: The Legend.  Back when the series was first released by BCI Eclipse, the film was included as an extra on the Best Of Bravestarr release.  While at the time it seemed like BCI was doing a little double dipping on the Best Of set (knowing that real fans of the show would re-purchase those episodes when the complete series was released later that year), the inclusion of the movie made it fully worth the purchase price.  As for the Millcreek re-releases, I’m not sure if we’re going to see the movie included or not.  In addition to the Complete Series set, they’re also releasing two slimmer volumes, each including 20 episodes of the series.  I’m wondering if they’re planning on following this up with a third volume with the remaining 25 episodes and the movie, but time will only tell… 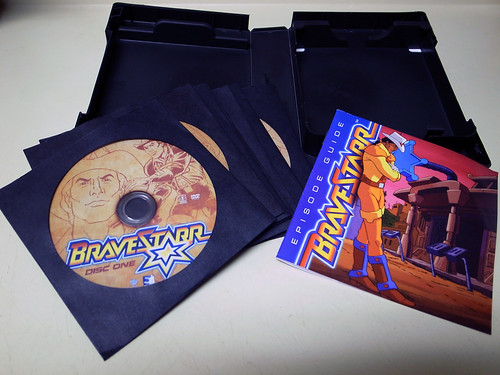 Though I’m a bit bummed that the movie wasn’t included in this set, I do have to admit that at around $30 you’re certainly getting your money’s worth.  Millcreek has kept to their budget, stacked-sleeved DVD keepcase design, but with this set they’ve brought up the quality a bit both in terms of aesthetics and value.  The cover artwork is a variation of the same great art used on the BCI version of the sets, and for the first time that I’ve noticed they’ve included a handy episode guide that fits right in with the stack of DVDs.  With a lot of their past complete series sets Millcreek didn’t include guides which made flipping through a stack of 5 to 20 DVDs a nightmare for trying to find specific episodes (in particular, their 21 Jumpstreet set really suffered from this.)  Like the cover art, the guide contains episode synopses and trivia culled from the BCI sets (and written by James Eatock of the wonderful Cereal Geek magazine.) 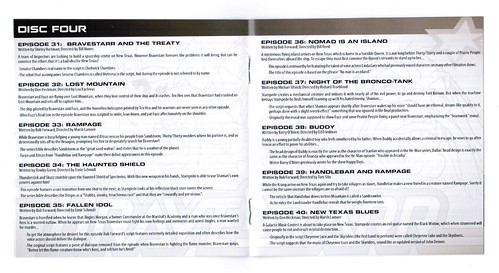 This set also includes a handful of the documentary interviews Andy Mangels produced for the original BCI sets that include conversations with Lou Scheimer, Pat Fraley, Tom Sito, and Tom Tataranowicz, as well as a commentary track on the episode “Eye of the Beholder”. 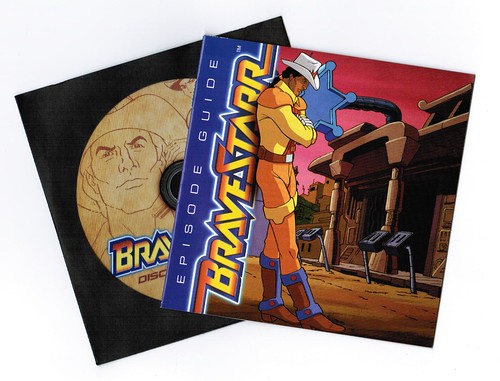 As far as the visual/audio quality of the set goes, it’s pretty good.  It’s not as crisp and clean as the BCI release (especially the audio), but when you consider the price of the set it’s more than adequate and should please casual fans of the series.

Now lets get down to the contest!  If you missed out on the BCI release of Bravestarr, and would like to win this very full review copy of MillCreek’s Complete 65 episode series set, then head on over to the Branded in the 80s Facebook page (like it if you haven’t) and leave a comment/response on the discussion board under the Bravestarr DVD Contest thread with the name of your favorite Bravestarr character.  I’ll be picking a winner at random on Thursday, June 9th at 2:00pm est.  Remember, these are region 1 DVDs, so if you’re an international reader take note.  Good luck!

These Should Exist: the Jem & the Holograms edition!