A couple weeks ago I was in a rush during the morning routine.  For some reason it seemed like I had two hundred things to do before running out the door to go to work, and right when I thought I’d finished everything, I remembered that I’d intended on updating Branded with a quick post during lunch.  What was I going to write about though?  There was nothing on the hopper and I didn’t have time to sit down and get a bunch of screen caps from a cartoon, so I quickly ran into out home office and grabbed a magazine advertisement blindly from a stack on my desk and stuffed it into my bag.  Problem solved, or so I thought.  When I got to work and got a second to catch my breath I pulled out the ad to see what I’d ended up with.  It was an ad for Nabisco Snack Mate, the spray cheese we know as Kraft Easy Cheese these days, from a 1981 issue of Woman’s Day.  I’d originally torn it out because I thought the artwork on all the little cheesy hors d’oeuvres was fun and it made for a striking image overall. 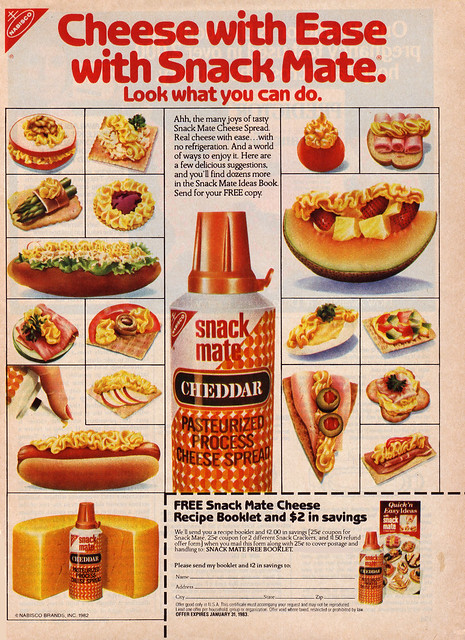 So I scanned the ad on my lunch break and got ready to fire off a few short thoughts about Easy Cheese when I noticed the small section at the bottom that featured a mail-away Snack Mate cookbook.  How weird I thought, that a culinary product this mocked and reviled had an entire cookbook dedicated to it.  I took a second to try and postulate what sort of interesting concoctions one would come up with that included spray cheese.  Then a scene from Weird Al Yankovic’s UHF popped into my head, the one where his character George and his friend Bob both get fired from their umpteenth lackluster job and in trying to cheer Bob up, George makes him the heartburn-inducing delight known as a Twinkie Wiener Sandwich!  I figured there was no way something that crazy was in the mail-away cookbook, but I couldn’t help but wonder what was in that book. 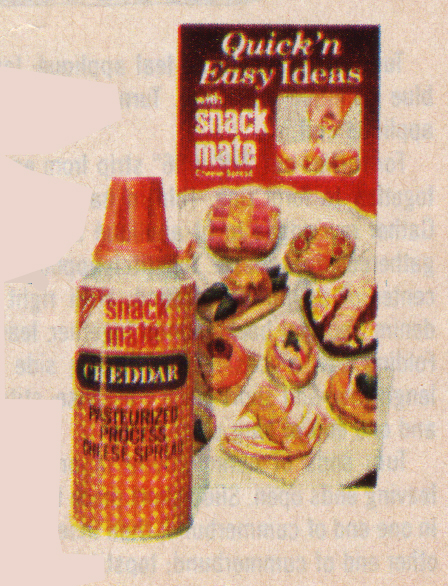 Before I knew it my lunch was over, I hadn’t eaten a thing, and I suddenly realized that this quick post for the site wasn’t going to happen without some more research.  I felt I needed to get some screenshots of Weird Al building a Twinkie Wiener Dog for starters, but if I was going to mention that, it seemed only natural to mention some other theatrical appearances of Easy Cheese.  Since I was digging that deep I figured I might as well go a bit farther and track down some other Snack Mate ads, as well as trying to figure out where this amazing cheese innovation got its start.  Most importantly I needed to get my hands on a copy of that cookbook!  By the end of the day I’d put the wheels in motion to do just that. 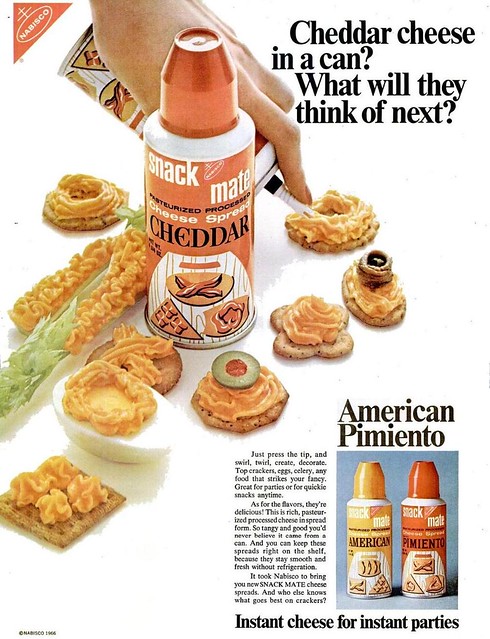 Today I’m just going to concentrate on the history. In addition to the ad I found (at the top of the article), I managed to locate a few more that date back to the introduction of this pressurized pseudo-dairy treat which was introduced sometime in 1966.  The oldest ad I was able to track down is from a 1967 issue of Life magazine and features three of the four original flavors, American, Cheddar, and Pimento (Nabisco also offered the cheese in a Swiss variety.)  From what I gather the canned spray cheese phenomenon began as an affordable and easy way for families to prepare nicely plated and pretty hors d’oeuvres for dinner parties.  Burgeoning household gourmands were popping up everywhere in the 60s, and Nabisco wanted a piece of that action, as well as creating a product that would require purchasing their mainstay line of snack crackers.  Design-wise, I actually think the decision to include the frosting-esque applicator tip was a stroke of genius and it beats the hell out of melting your own cheese and trying to scoop it into and dispense it from a piping bag.

It’s also interesting to note the difference between what was considered pretty and chic (in food presentation) back in 1966 versus what we typically think of today.  Plating was a lot more architectural or sculptural in nature 55 years ago, and the idea of building up a cracker with mounds of immaculately sliced olives (pimento included), lump crab meat, and a heaping yet frilly helping of creamy processed cheese so that it looked like a work of modern art was the goal.  If watching 7 billion food-centric shows on TV has taught me nothing else, today’s presentation is more about simplicity and sparseness.  I’m betting the Easy Cheese (which, let’s face it, would never make it to the plate unless we’re watching an episode of Chopped) would be applied in a single dollop only to be smeared in a pleasing arc along side a crisscrossed stack of two grilled baguette croutons over a bead of lightly blanched asparagus.  Or something like that. 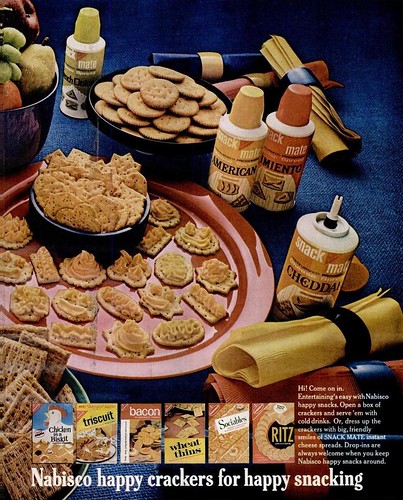 I think by 1969 the idea of using pasteurized, processed cheese in a can for froufrou parties wasn’t catching on and as you can see in the next advertisement Nabisco was having a little more fun with dressing up their crackers.  Now the user was encouraged to make cheesy smiley faces, more along the lines of pleasing one’s family instead of guests.  We also get to see a new option of cheese, French Onion.  Also notice that in the line-up of cracker options there is still a Nabisco bacon variety.  I remember eating these, or something similar, as a kid and marveling at the baked-in bacon bits.  In today’s salty-pork belly obsessed world, I’m surprised these haven’t made a comeback.  I mean Chicken in a Biskit crackers are still around, why not Bacon in a Biskit.  I wonder if that rings too much with a dog treat sort of feel? 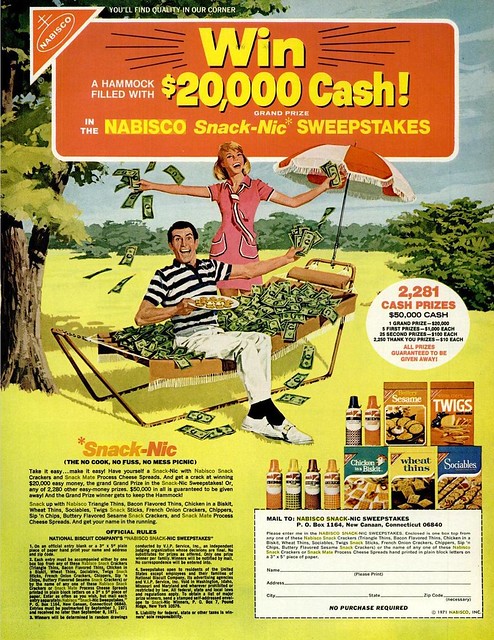 The only Snack Mate ad I could locate from the 70s was this next one featuring a much more robust line of spray cheese varieties.  Unfortunately I can’t make out the new varieties, though it looks like one might be a Swiss/American blend.

By the 2000’s I know there were at least seven more varieties introduced including Nacho Cheese, Pizza, Shrimp Cocktail, Bacon, Sharp Cheddar, Roasted Garlic and Philly Cream Cheese.  The product was also known as Snack Mate up until the 80s when Kraft Foods bought Nabisco and rebranded the product as Kraft Easy Cheese.  Today there are only four varieties offered, Sharp and regular Cheddar, American and Bacon flavored.  I’m also kind of bummed out in that the Bacon option has changed over time.  From what I remember in the 80s, there were actual bacon bits mixed in with the cheese as opposed to today where there is just a smoky bacon flavor added to the cheese.  I’m sure it’s cheaper to produce, but it’s kind of a letdown.

Next week I’m hopefully going to have part two of this crazy article up featuring some of my own memories of the product, the various cinematic appearances of Snack Mate/Easy Cheese, as well as a the 1981 cookbook, and a bit of fun with the Twinkie Wiener Sandwich!

Expanding my backstory on episode 47 of the Nerd Lunch Podcast…

They look awesome, but they taste like 1950s science…