I’ve spent an inordinate amount of time in my life combing through paper.  Aside from the thousands of hours of flipping through comics that I’ve logged since I was a kid, sorting and folding paper was a large part of my day-job for years.  Every day I’d sift though reams of medical claims, arranging them into piles by insurance company so that I could send out as many in bulk as possible.  But there was always a pile of singles left over, two to three hundred a day that needed to be folded by hand.  Yes, I’m well aware that there are machines built for this task, and believe me our office had one that must have been constructed around the turn of the century.  It was older than sin and only worked about a fourth of the time.  Even then it would eat up and shred claims which was more of a headache than folding them by hand.  Besides, there was no way that company was going to invest in a new folder/stuffer when they were already paying me.  I became so adept at sorting and folding that I was almost as fast as the machine when it was working properly.  At one point I started having nightmares about spending the rest of my life folding paper and stuffing it into envelopes.  It was around this time that I came up with the brilliant idea of securing a second job, working nights at my local Kinko’s.  Yet more paper.  Sorting, folding, and stuffing.

Around five years ago I made the jump into IT, laughing manically as I left the paper behind.  The blurred sorter’s vision, the constant paper-cuts, and the smell of printers ink on my hands were all fading away.  Of course, around five years ago I also started this site, and thus began a second wave of kneeling before the gods of paper as ephemera because an important passion in my life.  I’ve replaced the medical billing clearinghouse drudgery with the never-ending search for amazing forgotten tidbits that are hidden in million comic long-boxes, tucked away in the corner of an antique store cubical, and buried in mountains of 30 year-old stacks of magazines. Articles, postcards, stickers, posters, packaging, calendars, flyers, magazines, books, and of course, advertisements; this is the ephemera that keeps this site running.  Sometimes, in the middle of investigating every page of practically every single issue of Woman’s Day magazine from 1983, I swear that I’m going to go blind (just like Donald Pleasance in The Great Escape.)  But every so often I find something so irrevocably awesome, that it makes the whole process completely worth the struggle.  Below is one of those finds.

Maybe I’ve built this up a bit too much with this long-winded intro, but every time I set eyes on this poster (which will hopefully soon be hanging in my office) I get a bit giddy because it transports me so effortlessly back in time to when I was six and my family was having cable TV installed for the first time.  1983 was my first introduction to the wonder of the classic children’s programming on the first channel devoted to kids, Nickelodeon… 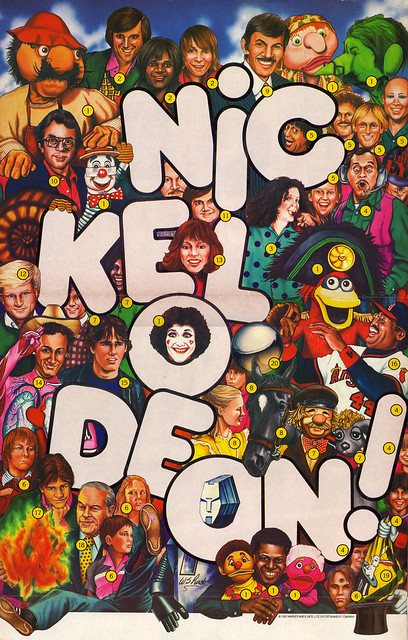 The only thing keeping this poster from being the perfect piece of 80s era Nickelodeon ephemera is that it was released about a year and a half before the network really came into its own with the introduction of all sorts of animated series and game shows.  Even so, 1983 was the year that they really took a step in the right direction with the debut of Mr. Wizard’s World, which cemented the last corner of the triumvirate of series (along with Pinwheel and You Can’t Do That on Television) that more or less defined the look and feel of early Nickelodeon.  And that is what this poster is all about! 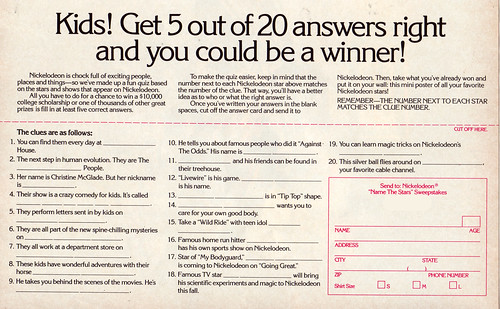 Well actually this poster is all about the 1983 Nickelodeon Sweepstakes.  In an effort to get the word out about the network to the millions of new cable subscribers during the boom in the early 80s, Nickelodeon concentrated their efforts on two fronts, non-violence and educational programming.  This Sweepstakes offered one lucky kid a $10,000 dollar college scholarship (though in the fine print you can see that this can be transferred to a cash payout when the winner turns 18, I guess in case attending college just wasn’t in the cards.)  You can tell, from the pages that make up the back of the poster below, that a lot of the original programming on the network was geared more towards education than entertainment.  Of course there was always the Canadian sketch comedy of YCDToTV and the insanity of Wild Ride, the live action series hosted by Matt Dillon focusing on the countries best roller coasters and thrill rides. 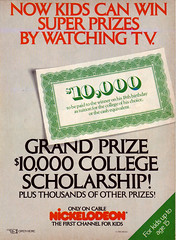 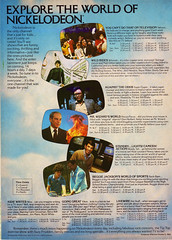 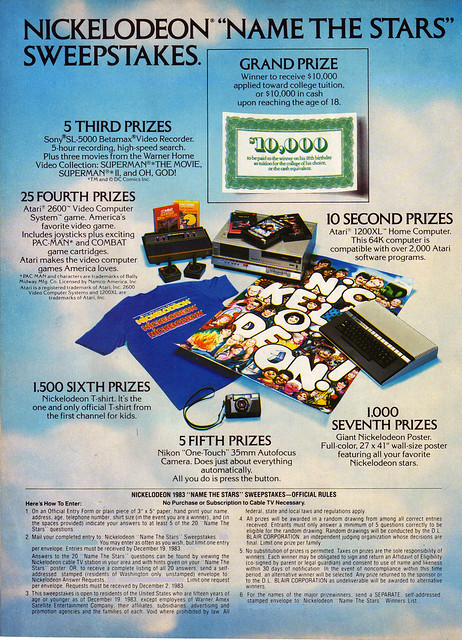 Anyway, back to the poster.  It was painted by a fella named W.S. “Bill” Purdom, a talented artist who’s worked with huge companies on everything from advertising to movie posters, and is currently specializing in capturing classic moments from baseball on canvas.  The poster features a ton of celebrities and characters including Reggie Jackson, Mr. Wizard, Matt Dillon, Chris Makepeace (from Meatballs and My Bodyguard fame), Leonard Nimory, Bill Bixby, Slim Goodbody, Christine McGlade and Les Lye (from YCDToTV), as well as Jake, Coco, Plus & Minus, Aurelia, Ebeneezer T. Squint, Silas the Snail, Luigi, and Admiral Bird from pinwheel.  Hell, even the Nickelodeon pinball makes an appearance!  Sigh.

Yup, finding a poster like this tucked away in a 28 year-old issue of Woman’s Day is the whole reason that Branded in the 80s exists.  It makes all the work, the hunting, the sorting, the flipping, the scanning & digital enhancement, and all the ailments, the paper-cuts, the old-mildewy-ink-stink on my fingers, completely worth it.  Hope you guys dig seeing stuff like this as much as I do.