Surrender or pay the consequences!

The end of the 80s really was a time of transition for me, not so much in that the decade was coming to a close, but because there were a lot of changes in my life.  Id just turned thirteen and most of the family was uprooting from out home of the previous 12 years.  My sister had decided to stay behind in Florida as the rest of us made our way up north to Massachusetts (a temporary stopgap on the way to New Hampshire where we’d only end up spending nine months before moving back down south to Georgia.)  I was stuck in that awkward phase where I still wanted to collect toys and spend every afternoon and Saturday morning watching cartoons, but at the same time I was trying to act more like an adult after moving into middle school and riding the same bus as the high school kids.  Heck, even though I still loved a lot of the cartoons and toys from my childhood, these properties and franchises were beginning to die out.  There hadn’t been an peep on the Star Wars and He-Man fronts for a few years at that point (except for the New Adventures of He-Man which I was ignoring), and G.I. Joe and Transformers were both starting to convulse with the death throws of ailing toy lines (Pretenders and G.I. Joe in space anyone?)  Though there was a brand new crop of cartoons that were vying for my attention, only a handful caught my eye (C.O.P.S., Teenage Mutant Ninja Turtles, the Real Ghostbusters, and Beetlejuice.)  For the most part, in those last few months in Florida I started tuning out to kid’s stuff.

After the move, when we first got settled in our Massachusetts apartment, I went through a weird mourning period.  I wasn’t enrolled in school yet because we were waiting for our new house to be finished in New Hampshire, and there were no kids in the complex where we lived.  It was the middle of winter, my first experience being cooped up during snow and ice storms, and I was really starting to miss my friends.  Even though I’d lost a lot of interest in the current crop of cartoons, they were a link back to Florida and happiness, so I started gorging on them as much as I could.  We didn’t have cable during that time so I only had access to a couple of UHF channels and the main networks, and what I discovered were a bunch of shows that I’d never seen before.  I didn’t realize it at the time but most of these new cartoons were actually a couple years old and I count myself very lucky to have been exposed to them before they disappeared into obscurity.

There was Denver the Last Dinosaur about a group of kids who unearth a bipedal talking brachiosaur from a giant egg in a tar-pit, and Bionic Six which was basically a cross between the Brady Bunch and the Six Million Dollar man.  But the one show I really fell for was called The Spiral Zone… 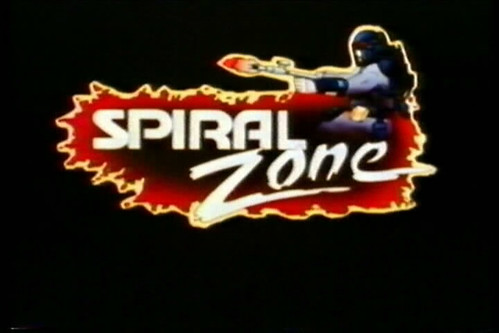 Set 20 years in the future of a potential 2007, the story follows an elite band of heroes called the Zone Riders led by Col. Dirk Courage who are Earth’s last defense against the Spiral Zone.  The zone is a cloud of dark mist that engulfs half of the earth’s landmass.  Created by mad scientist Dr. James Bent, the biological zone mist is dispersed by a sort of organic mechanical generator that the doctor developed, and it has the effect of turning most humans into mindless zombie slaves.  After being dismissed from military service, Bent hijacked a space shuttle and started “planting” these generators all over the Earth.  He took on the moniker of Overlord and built a specialized army, called the Black Widows, to help him take control of and rule the world. 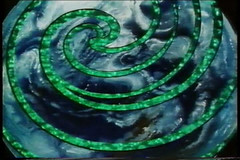 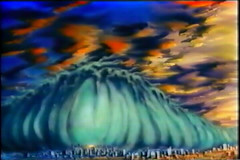 Though society continues to function in non-zone areas, Overlord is gaining ground and it’s up to the international members of the Zone Riders, Wolfgang “Tank” Schmidt, Max Jones, Hiro Taka, Kat Anastasia, and Col. Dirk Courage (who are equipped with special armor and vehicles that can protect them from the zone mist) to stop him. 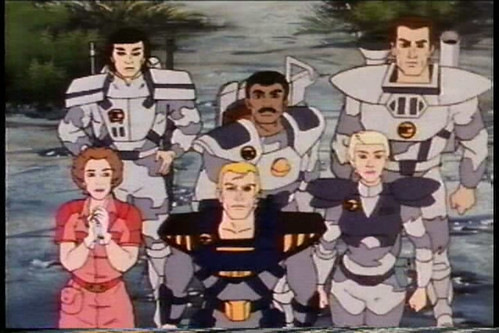 First and foremost, what really stuck me as a kid, and even now, is the interesting visual design of the series.  The zombifying effect of the zone causes the skin to break out in vivid red lesions, as well as a yellowing of the eyes and a slack jawed expression. 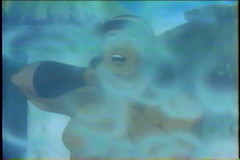 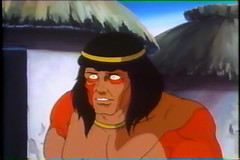 For an action cartoon from the 80s, this is pretty disturbing stuff and adds a very serious tone to the overall production quality of the show.  I especially love how these zone symptoms were worked much more artistically into the character designs of the villains.  Take Overlord for instance.  With his overly exaggerated black brow, under which his small eyes are sunken into large skull-like red lesions, and the batwing-like design around his nose and mouth he is both ghoulish and evil looking.  Add to this the skeleton tooth-like texture on his upper lip and it makes for a truly frightening visage. 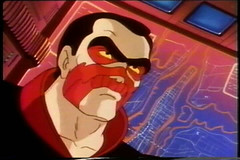 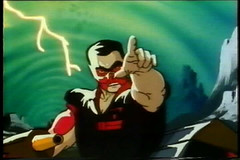 The mix of symmetry and character traits is also intriguing.  Though all the villains have heavily patterned red facial lesions, there is a distinct separation between those full invested in the cause (or who are too dumb to know otherwise) who have very eye-pleasing symmetrical splotches, and those who would even stab Overlord in the back who tend to have asymmetrical blots (usually giving the character a Two-Face like appearance.)  This level of thought put into the character design is awesome and it’s a trait I wish I saw more often in animation. 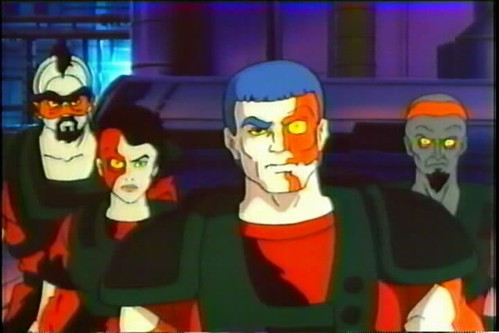 Though the hero characters are overly wholesome and “white bread” in their character designs, a lot of care was put into their very iconic vehicle design that also really floors me.  Col. Courage pilots what can only be described as a giant cannon mounted on top of a huge wheel.  He sits at the center of the wheel and is balanced on both sides by ski-like skids. 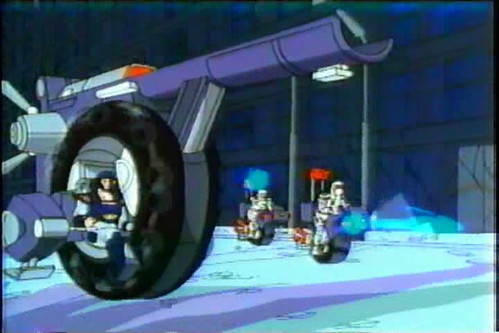 All of the other characters drive very interesting anime-influenced single wheel motorcycles that are both compact and very novel in design.  As far as I can tell, the Spiral Zone cartoon was very loosely based on Bandai’s Japenese toy line of the same name (of which pretty much on the design of the vehicles and some of the armor makes the transition), but the idea of mono-wheel mechanical transportations is hardly a new one (with examples of potentially fuel-based working models dating back as far as 1931, as well as many modern designs.)  Though I first saw them in the Spiral Zone cartoon, they were also a popular mode of transportation in another Japanese property, the Venus Wars from 1989.  In fact, when I was first exposed to the Spiral zone I only caught a couple of episodes and even though the character design had a big impact on me I probably would have completely forgotten about it if I hadn’t taken a chance on picking up a copy of the Venus Wars back in the early 90s when anime was making its first huge influx into America.  Watching that movie over and over is what kept the vehicle designs from the Spiral Zone alive and well in my memory. 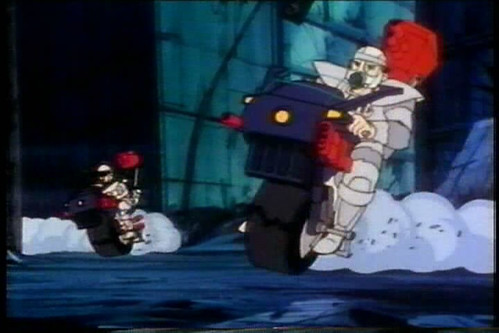 If the super awesome character and vehicle designs weren’t enough to cement this show as a seriously interesting bit of animation history, there is also a legacy of top notch writing on the series.  Though like most 65-episode syndicated cartoon series of the 80s the level of the writing can be hit or miss, there was some great talent working on this show including J. Michael Strazinski (though he did end up taking his name off the credits in lieu of a pseudonym) and my favorite animation writer from the 80s, Michael Reeves.  Reeves penning scripts for a series is almost always a great sign of boundary-pushing and iconic concepts my all time favorite being the episode of Dungeons and Dragons where Hank and gang decide to take the offensive and hunt down Venger), and Strazinski has a history of helming great series like Jayce and the Wheeled Warriors and The Real Ghostbusters.  Because of the main plot, the series deals with a lot of higher level concepts beyond just good versus evil and strays into some odd territory for children’s programming like survivalist militia groups and acceptable losses during war.  I’m not saying that the episodes are all heady Band of Brothers-like romps into morality, but there are a lot of issues brought up that you don’t tend to see in cartoons.  They’re just undertones most of the time, like the racial genocide theme in the original Transformers cartoon.  Also, unlike its predecessors G.I. Joe, The Transformers, He-Man, etc., the series does feature a bit more violence.  Characters typically use laser guns and rifles, and there are sequences with characters getting hit, though it’s usually always on a “stun” setting ala Star Trek.   It does add to the grittiness of the series though. 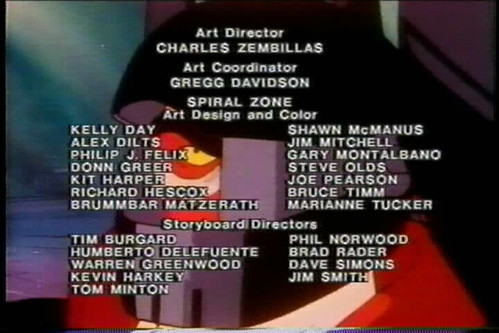 Also, this show was also one of the series Bruce Timm worked on before striking out a couple years later with Batman the Animated Series.  The voice cast is great as well featuring many Sunbow actors including Michael Bell, Frank Welker, Neil Ross and Dan Gilvezan… 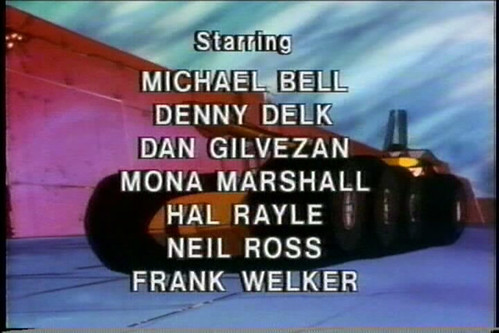 The series also features one of my favorite cartoon theme songs from the 80s.  Written by Stephanie Tyrell, and performed by Steve Tyrell (husband, brother?), Max Gronenthal, and Ashley Hall, the tune is a hair-metal-inspired classic with a pumping chorus that would be right at home with the soundtrack to Transformers the Movie.  Seriously, the song will put hair on your chest. 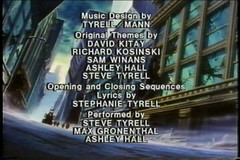 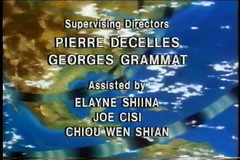 Before this becomes a dissertation of intriguing obscure animation, I’ll cut this installment short with some more general facts about the franchise.  Though the series did receive a full 65 episode order, it didn’t make a huge impression on its target audience.  The toy line, adapted from Bandai by Tonka in the states, was also a relative dud, most likely because it centered on the classic G.I. Joe and Barbie 12″ doll format which never really caught on in the 80s.  Honestly, figures any larger than the 6″ Masters of the Universe line tended to be duds (including Bravestarr and V.)  It was merchandised a bit with a least a lunch box and a 4-issue comic book series released by DC (written by Michael Fleisher and penciled by Carmine Infantino.)

The series was never officially released on DVD (though it was released on a handful of VHS tapes collecting a smattering of episodes), but there is a complete set floating around on the internet produced by Spiral-Zone.com with the aid of the original series supervising director Pierre De Celles (who provided the series masters on VHS to the website for DVD production.)  Though it’s currently listed as sold-out on the site, the webmaster seems open to limited print runs when there’s enough interest.  I bought the set as soon as it became available a few years ago and I have to say it’s pretty darn cool.  The quality on most episodes ranges from about a 7-8 out of 10, definite VHS quality, but they are far from unwatchable and pretty much are only available in this format.

It’s Valentine’s day all over again at Plastic Pumpkins…