Before the Garbage Pail Kids we had the Crabbage Patch Teenagers!

Getting a chance to look at all these old book club flyers reminded me that I have a stack of some of the more obscure Scholastic branded magazines from the 80s called Maniac.  I plan on scanning the best of those issues for next week, but today I have a really cool advertising parody from the back of issue five called the Crabbage Patch Teenagers! 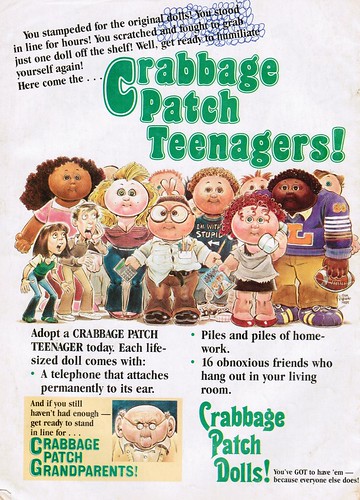 There are metric tons of parodies of the Cabbage Patch Kids phenomena from the 80s, Garbage Pail Kids being my favorite, but the above ad is kind of cool because it was one of the earliest that I’ve been able to track down.  In the timeline of insanity we have the CPK craze really kicking into high gear around the Christmas season of 1983, then sometime in early 1985 John Pound painted Mark Newgarden’s CPK parody concept called a Garbage Pail Kid for the 1985 Topps Wacky Packages re-launch (though it never made it into the final set), next John Pound, Mark Newgarden, Tom Bunk and Art Speigleman launched Topps full-on Garbage Pail Kids parody stickers in June of ’85, and last but not least, Mad magazine premiered its Cabbage Patch Kids parody in their December 1985 issue (consequently I couldn’t find any mention of CPK in Cracked through the end of 1986.)

So the above Crabbage Patch Teenagers is one of the earliest parodies, sliding in right behind the initial doll insanity.  Though I think I can safely say that this ad wasn’t an inspiration for the Garbage Pail Kids, it’s none-the-less a GPK precursor that looks a whole heck of a lot like the artwork John Pound would be producing just months later.  Especially when you look at the painting he did for the Wacky Packages piece, which bears little resemblance doll-wise to what he ended up doing in the 1st GPK series set, this Maniac ad really is the 1st time the public saw something resembling a Garbage Pail Kid.

I don’t know,  I find this parody fascinating…

Another archival Wacky Packages book is on the way!