Return of the 31 Days of Monsters, Day 5: Geraldo, eat your heart out!

Today’s specter is none other than the ghost of Al Capone, from episode 107, Live! From Al Capone’s Tomb, which first aired in syndication back in 1989… 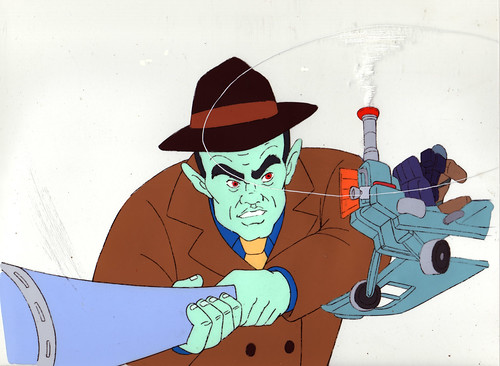 This episode was a parody of the spectacular failure and so-bad-it-was-hilarious 1986 Geraldo Rivera special, the Mystery of Al Capone’s Vault, where the “investigative” journalist opened up what he believed to be a treasure trove of secret Al Capone mobster-y goodness.  Instead all he found was a stop sign and a couple empty bottles of gin.  Oh and he discovered a heaping helping of humiliation.

In this Real Ghostbusters episode, Peter decides to book the guys for a special television event to watch Al Capone rise from his grave live before the broadcast audience (which he supossedly does once every 10 years.)  They’d then capture him as a publicity/advertising stunt for the Ghostbsuters, though the “Al Capone” they intended to catch was really just Louis in a costume.  Not taking their yuk yuks lightly, the actual spirit of Capone gets pissed and zaps all four Ghostbusters to the spectral realm so that he can dish out some payback with a baseball bat (ala DeNiro’s scenes in the Untouchables.) 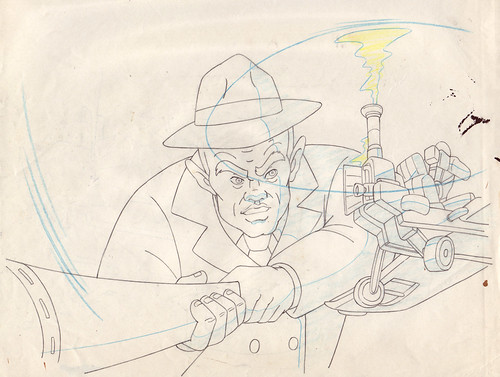 Honestly, this episode is probably in the running for some of the worst animation of the series, but I still kind of dig the idea of a 30-foot tall Capone ghost wreaking havoc on the guys.  I really dig the cel because I also got most of Ecto-2 in the frame as well.  One interesting thing that I noticed is that the guy/gal who painted the cel didn’t follow the pencils very closely when it came to shadowing the figure.   Granted, it’s less than a second of actual screen time, but I always love a well rendered cel, in particular one that is well shadowed.  Bummer. 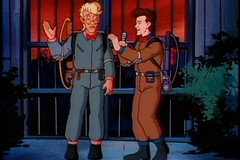 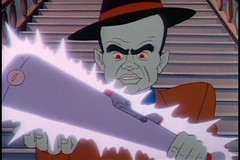 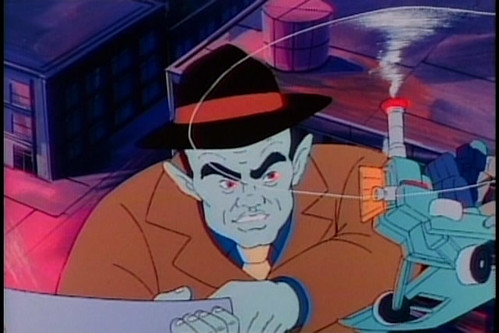 Also, if you feel inclined, I would love everyone to spread the word about the Return of the 31 Days of Monsters countdown, so hit up those social networks and tell a friend (my twitter handle is smurfwreck, and I’m on the Facebook as well.)  If you’d like to read more Halloween-y goodness, you can also click on the Halloween Archive link to the left (the banner with King Kong), as well as heading on over to the Countdown to Halloween to check out lists of a bunch of other sites participating in this year’s Halloween blogging event… 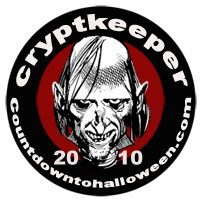