So it’s the last day of September, and as anyone who has been following Branded for awhile knows, that means that tomorrow marks the beginning of another annual Countdown to Halloween blog-a-thon!  This will be my fifth year participating, and the second year for newly re-designed Countdown hub website (where you can find over a hundred other sites that are also digging up their coffins and dragging out all their orange and black goodies.)  This year I’m bringing back the 31 Days of Monsters which will showcase another batch of Real Ghostbusters animation cels.  So to kick off that theme I thought I’d share my collection of the 1989 Topps Ghostbusters II sticker cards! 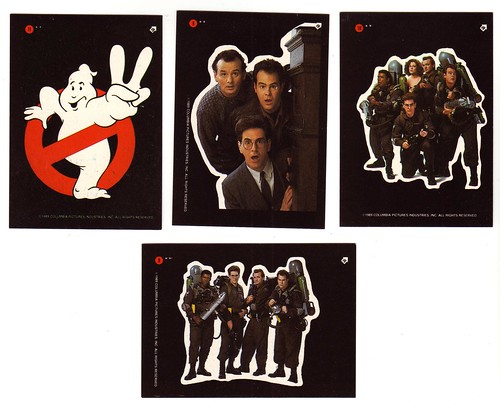 Though I know a lot of people don’t seem to care for the Ghostbusters sequel, I can honestly say that after walking out of the theater back in 1989 there was one big smile across my twelve year-old face.   I mean with an animated Statue of Liberty led by a modified NES Advantage controller, references to He-Man, one of my favorite actors at the time Peter MacNicol, pink slime, a Real Ghostbusters cartoon influenced make-over for Janine, Louis in full-on Ghostbusters gear, the ghosts of the Titanic, and the crazy courtroom scene with the Scoleri Brothers, what’s not to love? 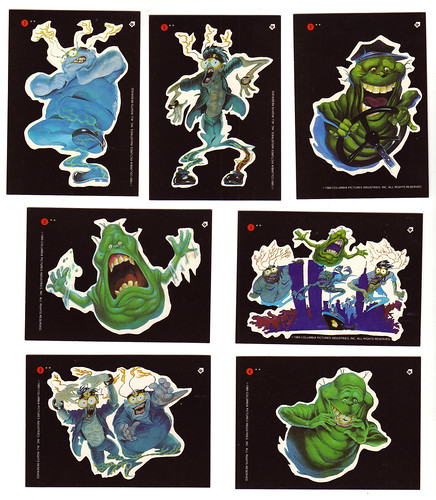 As far as this set of sticker cards goes, I am so happy that the Topps designers decided to mostly forgo portrait stickers and stills from the movie in favor of featuring what at the time would have been rare concept art.  My best educated guess is that these paintings were done by Henry Mayo (not the famous doctor, but the 80s/90s era movie concept artist) based on the fact that he designed the Scoleri Brothers and that these are very similar to that original concept art.  There’s also the clue of the four-armed, six-eyed specter in the group shot on sticker #2, which matches concept art for the same creature elsewhere. 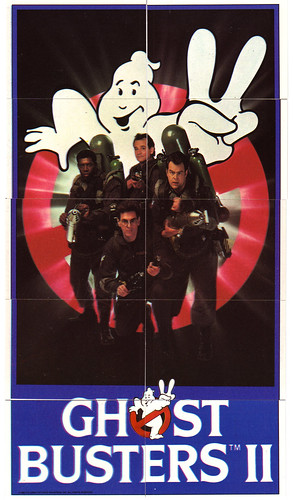 All in all, this set totally makes up for Topps not covering the first film with a card and sticker set, at least in my book.  I wonder if Mayo did any concept art for the ghostly baby-snatching version of Janosz?

Anyway, get ready everyone, because tomorrow marks the beginning of the Return of the 31 Days of Monsters here at Branded in the 80s.com!

Being Re-Gifted My childhood, Part 1

Day 23 of the Halloween Countdown: I wonder when the first edible full-body costume will come along?