Target starts missing the mark sooner that I expected.

For anyone who is a regular reader here at Branded, you’ll probably know that when September rolls around, it marks the beginning of a very special time of year for me.  Whereas most people probably look to Christmas or the start of summer with excitement, it’s a safe bet that I’ll start getting giddy with the coming of fall and another Halloween season.  I’m pretty sure it’s always been this way for me, but it wasn’t until I started this site that I realized just how much I dig the season and this time of year. 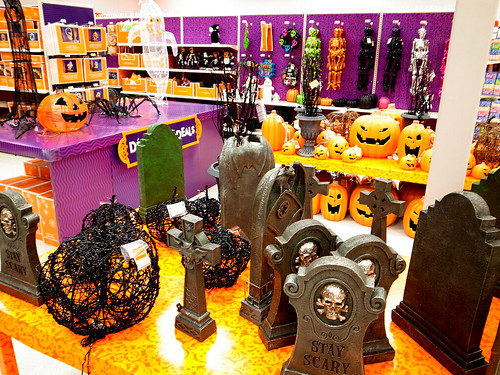 Participating in October blog-a-thons, geeking out over crazy new candy designs, overdosing on old horror movies, and documenting the holiday’s more commercialistic aspects have become a tradition in my household.  For me the season officially starts when my local Target puts up its yearly section dedicated to all things spooky.  Like the Macy’s and Gimbels Christmas displays of years past, Target has become a cornerstone for the Halloween season offering not only the basics (candy and costumes that you’ll be likely to find in any other store), but also a slate of interesting bits and baubles exclusive to the retailer.  I’m always curious to see what themes the store will introduce; what sort of design and packaging.  In years past there’s usually been dueling concepts, one aimed at kids (Edgar and Ellen, Skelanimals, or Domo), and another aimed at adults (prominent themes have evoked the Mexican Day of the Dead celebration as well as the cocktail and tattoo cultures.) 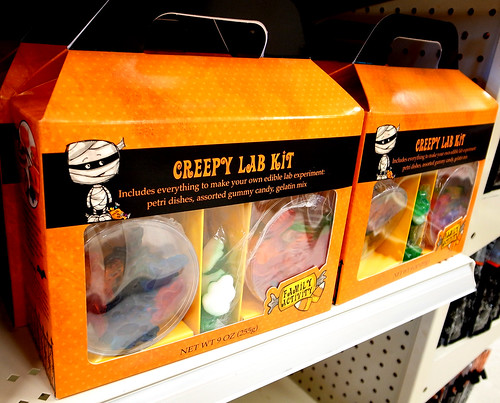 Last year I was struck by a sense of pre-nostalgia.  I was convinced that I’d eventually look back and pine for the various displays, characters and merchandise.  It’s almost as if I could feel it slipping away even though there was a ton of cool offerings right there in front of me.  A year ago today I wrote the following:

In fact, for once I can feel the future nostalgia building as all of this stuff, the characters, products, and signage starts seeping into my consciousness.  I can already see the day when the company will switch gears to follow a new, cheaper, pared down trend, and I can already feel myself missing the current one.  It’s sort of like that cliché wish where one imagines utilizing time travel to go back and grab all the stuff that you miss from your childhood, except I’m already there.  The future me is sending back messages via brainwave wifi technologies, begging me to scoop up every piece of flat scan-able branding, or else…

Well, I thought (or hoped) that the future me was years away, but I’m pretty sure I’ve just stepped into those distant shoes.  Walking into Target this year has been kind of shocking in that for the first time in five years there was only one word that I could think of to describe their Halloween section.  Bland.  There are no real visible themes, no licensing partnerships, and not much actual merchandise.  The aisles are sparsely stocked with mostly boring tidbits in pretty drab orange packaging.  There’s also sort of a weird disconnect to the one bit of branding that is apparent.   Target usually has a handful of branded characters that show up on packaging and decorations, and this year they’ve decided to go with a classic monster theme (similar to designs that they’ve used in the past.)  There are three main child-like characters, a vampire, a mummy, and the Frankenstein’s monster, that for the most part are adorning the various candy and paper products, pretty much anything aimed at kids.  But in the home décor section there are a slew of similar, more adult renderings of some of these classic monster characters that are all presented in a completely different style, mainly a mummy, a witch, and a variation on the Frankenstein’s monster.  Normally I’d be all over these characters, but honestly, most of the products they’re paired with are gaudy or boring. 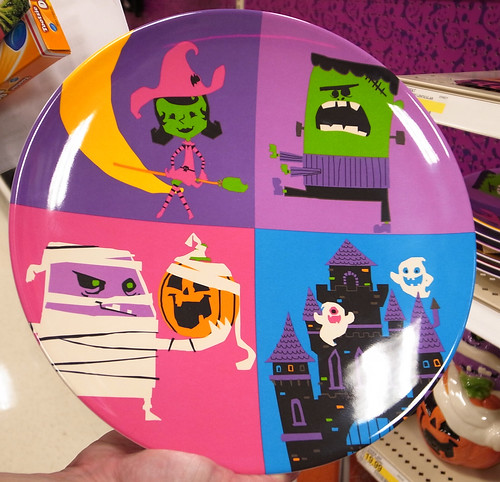 For once, it just feels hollow.  I’m not sure if it’s the once awesome giant sugar-skull planters that have been hideously bedazzled with neon glitter, the lackluster candy section with nothing new to offer, or the general “warehouse” feel to the seasonal displays, but it’s just such a let down.  It doesn’t help that many of the companies that provide neat season merchandise have also been disappearing or simply resting on their laurels.  I haven’t seen a single four pack of the tiny Halloween-themed Jones soda cans.  Though the Tootsie company is still pumping out one of my personal seasonal favorites, Ghost Dots candy, they didn’t follow last years trend with any new varieties (such as the Candy Corn and blood orange-flavored Bat Dots.) 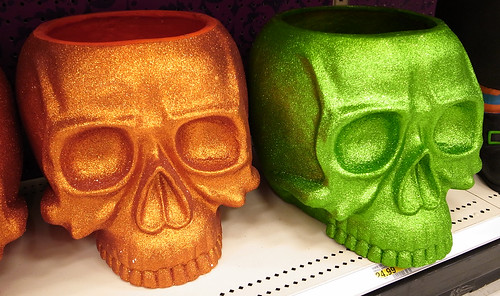 Certainly not the most enlightening statement, but this just reinforces the importance of making your own traditions outside of corporate beasts.  Growing up I also tired of hearing my parents go on and on about the glory of the good old days, but facts are facts and companies mindsets of drastically changed in just the past five years, let alone fifty.  These days business isn’t just about wowing the customer to get them to part with their cash, it’s a hairy balancing act of promoting, packaging and selling in the cheapest possible manner.  With the all new layout and redesign of many Wal-Marts nipping at Target’s heels, maybe it makes sense for them to fight back by dumbing down their stores.  Fanatics like me aren’t the basis for good business in such a broadly reaching consumer market, and shooting for a homogenized, obvious esthetic makes good business sense.  It’s just unfortunate.

These Should Exist: Adventures in Babbysitting Edition

Creature on the loose!