I think I’ve written about this before, but there’s aspect to American pop culture that I find endlessly fascinating; this deep need for sustainable continuity.   Though we’re fanatics for origin stories, once an idea is set into motion we very rarely want to see it end.  So when a successful sitcom invades our television schedule, the hope is that it will be continually produced for as along as possible, ten, twenty years down the line. When it ends, there’s still hope in our hearts for spin-offs, and reunion specials, and when all else fails, hopefully it will eventually end up as a big screen adaptation (which will hopefully be successful enough to garner a trilogy.)

I’m not sure what it is in our culture that makes us so clingy as an audience.  Maybe subconsciously the idea of a story having a distinct ending echoes fears of our own eventual mortality.  Maybe we just love a good success story and nothing says success like sequels and long running TV which have a validating effect on our own enjoyment.  I loved Ghostbusters something fierce growing up and I pined for the eventual sequel that seemed to take a million years to materialize.  Sure, I’d watch the original when ever it came on TV, but somewhere in the back of my mind I felt that I deserved to see the continuing story.

Battling against this cultural yearning are the hopes and dreams of the very people who makes these stories possible.  Sure, Dan Akaroyd, Harold Ramis, Ernie Hudson, and Sigorny Weaver seemed more than willing to make a sequel but how did Bill Murray and Rick Moranis feel?  Word is that they weren’t all that keen on the idea, that as actors and creative-minded individuals they were more interested in pursuing something new, something that was interesting to them at the time.  Often this creative reluctance to suit up for a sequel is what quashes projects, but it’s not necessarily the end of the story.  There are other outlets for continuity, especially for entertainment that feeds the all-ages sensibility of an audience.  The cartoon spin-off for instance.  While waiting the five years in-between Ghostbusters films, DiC started production on the Real Ghostbusters cartoon, which featured the continuing adventures of our favorite spectral sleuths.  But for various reasons the creative yearnings of writers, and the monetary needs of the studio forced the story to change.  Egon became blonde, the group all began wearing colored coded jumpsuits, Janine became a punk, the Stay Puft Marshmallow Man became an ally and Slimer switched from being a chaotic-neutral villain to a bungling, Baby Huey-esque sidekick. 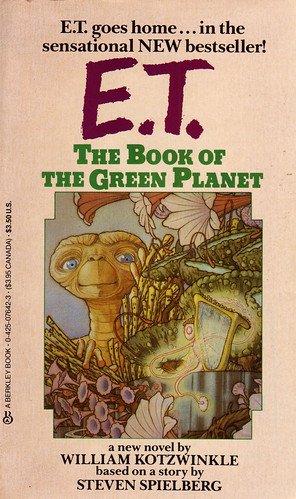 This leads me to the gist of today’s subject, which is the continuing story of the beloved plant-friendly alien, E.T. the Extra Terrestrial in his only sequel story, The Book of the Green Planet.  Published in 1985 and written by William Kotzwinkle, the same gentleman responsible for the film-to-book novelization of the original story, Book of the Green Planet follows E.T.’s adventures after reuniting with his species as they travel back to the home planet to study the flora specimens they’ve been collecting from Earth over the millennia.  In the original novelization we got a peek into a different view of the movie as Kotzwinkle tended to write from E.T.’s perspective, giving the reader an insight absent from the movie.  In that book E.T. comes across as a wholly different character, at times a centered peaceful monk-like being wise beyond his ten million years of age (yup in the book he’s 10,000,000 years old for crying out loud), a others a tired curmudgeon afraid of offending Elliott and his siblings as he sees them as the rulers of the planet.  It’s an odd balancing act that takes a weird shift in the follow-up sequel novel.

Unburdened by adhering to a script, Kotzwinkle decides to let loose in the sequel revealing that E.T. is not merely an alien from another world, but a traveler from outside of our universe/dimension.  Kotzwinkle also decided to mold the character more into the image we get in the film, drawing him as playfully ignorant, continuously spouting incorrect English to his friends as if he had learned to master the language during his layover on Earth.  He’s also shown depressed, having left his newfound friends behind, never to see them again, yet I find this awkward and weird considering that he’s literally lived throughout the millennia.  Was this experience with Elliott so profound, and if so, how boring was the rest of his existence?  Besides, for a being of that age who travels through out dimensions and across galaxies with ease, isn’t it a bit naive to assume you’d never see your friends again?

Anyway, the basic plot involves E.T. returning home only to be demoted for his shenanigans on Earth.  Sad and lonely, it becomes his quest to find a way to travel back to the Milky Way and to his beloved friend Elliott.  The book flits back and forth between E.T.’s adventures trying to secure a vessel to make the trip and a slightly older Elliott on Earth who is struggling with puberty and his newfound obsession with girls (which troubles E.T., through their psychic connection, to no end.)   Trying to help (but coming across as a dumped ex stalker) E.T. sends astral projections of himself towards Earth in the hopes that they will meld with Elliott’s troubled soul and help him to find peace (as well as the nerve to finally step up and mingle with the girl of his dreams.)  In a sort of anticlimactic ending E.T. grows a ship (making it easier to hide from his people) and embarks on the long journey back to Elliott, though the story ends before the trip is finished leaving the book open to an obvious sequel (though unlike this one, a sequel that never materialized.)

All in all, this book (and the original novelization) gives the audience what it craves, a continuation of the story with so much more to explore.  It’s weird and not much like the original film, but it is something which in and of itself is sort of a treasure.  Also, believe it or not, with the re-release of this book in 2002 there was a teacher’s guide printed that has artistic rendering of a couple of the odder creatures mentioned in the book including the ellusive flopgopple!

The All New Branded Podcast, Episode 2…

Holy crap on a crutch!