Since I decided to empty my backlog of McDonalds related ephemera this past Monday, I thought I’d also spend a little time talking about the weird craziness of the fast food giant trying a bit too hard to reach out to kids and families in the 80s.  On Monday, I mentioned an ad for a McDonald’s branded storybook and record series that was at the back of one of the yearly coupon calendar.  To me it seemed like Micky D’s was overstepping their bounds by taking it upon themselves to offer educational children’s books outside of their restaurants.  Heck if these were part of a Happy Meal I probably wouldn’t think anything of it, but because they were sold in bookstores and the like it just seemed wrong.  Well, the weirdness didn’t stop there.  In fact in 1987 McDonalds was also getting into the fashion industry as well… 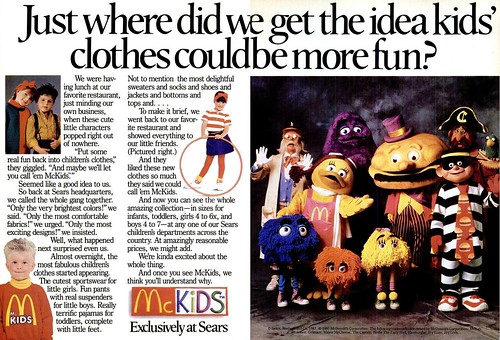 Dubbed McKiDS (not to be confused with the 1992 NES game of the same name), McDonald’s partnered with Sears on a line of branded clothing for kids 1-7 years of age.  The tagline for the collection was, “Fun Clothes for Small Fries”.  Thoguh they were branded with McDonald’s iconography, they were really a product pushed by Sears, and the management of the fast food chain was really only involved in a consulting and licensing capacity.

Branding on clothes is obviously nothing new, but an entire line of children’s clothing like this from a company that specializes in burgers and fries is just weird.  Not even addressing the idea of a creepy mustard and ketchup-colored adult clown thinking about playing dress-up with our children, it points to the fact that some companies can easily lose sight of what it is they do well in the race for more money.  It was another step into that distopian future ideal of countries run by single corporations providing us with everyting from the food that clogged our arteries to the healthcare that cleared them.  McHousing, McClothes, McFood, and McEntertainment.  I’m not the kind of guy who typically puts on a sandwich board and grabs a bell, crying out to his fellow men about the evils of corporate America, but things like this really do scare me a bit.

What’s even more confusing to me is that even though the clothes all featured the iconic golden arches logo somewhere, a lot of what’s in these two ads looks like regular non-branded clothing.  If you’re going to go so far as to introduce a line of McDonald’s clothes for kids, why wouldn’t you make the best of the stable of iconic characters you own?  What parent is so into McDonalds as a trusted company on that kind of level?  Only 15% of the clothing featured images of the McDonaldland characters (according to some articles I dug up), so even going past the parents, why would kids want these clothes either?  This just makes it seem kind of devious, as if the company isn’t interested in spreading their brand, just positioning themselves for new revenue streams in a monopolistic maner.  It’s the Wal-Mart effect.

Apparently there was a slew of similar clothing lines coming out in the late 80s including Jell-O branded toddlers garments, Coca Cola clothes, as well as a line of Burger King kids and teen clothing.  I don’t remember any of this at the time (well, I do rememer oversized Coke sweaters and sweatshirts), so I’m wondering if it didn’t catch on at the level were it was really country-wide?  When looking up the clothing line on the interwebs I found a ton of articles about a re-launch of the McKiDS line back in 2004 mainly launching in other countries, so my guess is that it originally petered out pretty quickly here in the States.  I wonder if this is still an idea the company is pushing?

One Interesting thing I’d like to note about the above ad (outside of all the grouchy Big Brother talk) is that it featured two discontinued characters from the McDonaldland crew, The Professor and Captain Crook, but surprisingly did not feature Ronald McDonald.  I bet there was some market research done that pointed to the fact that parents might not have been interested in a clothing label promoted by the iconic clown.  On the other hand, I wonder why they brought back some characters that they’d made efforts to remove from their branding?  Also, is it just me or, in the above ad, does Mayor McCheese seem to think this whole thing is a bad idea? 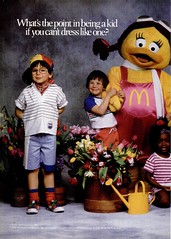 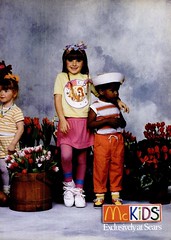 PCP #6, I always wanted to shake a severed hand…