Thinking about some magical food moments from my past I can’t help but immediately gravitate towards the splenderferious invention that graced America’s freezers in 1982 (by my best educated guesstimates), the Pudding Pop.  Sure, there are other frozen treats that I love, Screwballs, Otter Pops, and Slurpees, but sucking on a pudding pop was like having a symphony in your mouth and it always played the theme to Star Wars.  Seriously though, there was something magical about the smooth, velvety texture of a good pudding pop that other treats (Fudgsicles and ice cream bars) just couldn’t match. 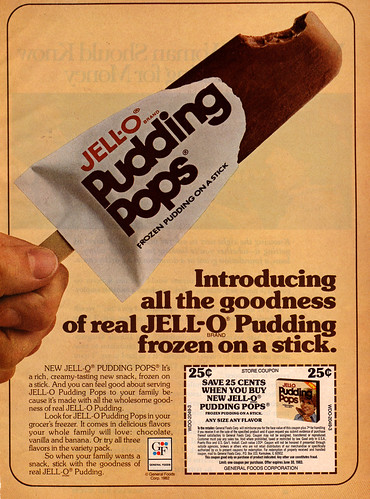 Growing up there was only one pop in my household’s freezer, the Bill Cosby endorsed Jell-O Brand Pudding Pops from General Foods.  Introduced in 1982, these frozen treats were originally available in three flavors, Chocolate, Vanilla and Banana.  Personally I was a vanilla man, though I have a vague recollection of eating a banana pop or two.  One of my favorite food related sense memories is of the thin coating of ice that would envelop the pudding pops.  It was always fun to see if you could loosen it in an entire sheet and slide it off the pop.   This ice coating also made for a great makeshift wall between the bottom of the pop and the stick so that the pudding wouldn’t melt directly onto your hand if you decided to savor the experience.

Though Jell-O was the only brand in my house, there were others available, in particular Swiss Miss, which had a much more robust variety of flavors… 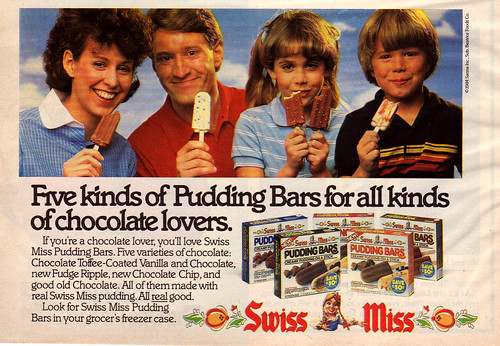 I’ve had a tougher time trying to nail down the date that these Swiss Miss Pudding Bars were introduced, but I’m betting it was in and around 1982 as well based on this television commercial.  The ad above is from 1984 and features no less than eight different varieties including chocolate, vanilla, chocolate covered chocolate & vanilla, chocolate chip, fudge swirl, and chocolate toffee covered chocolate & vanilla.  There were also sugar-free varieties (mentioned on the back of this box in Jason Liebig’s collection.)  On a side note, I really dig the older style Swiss Miss mascot design because she was a claymation style puppet.  Drinking Swiss Miss hot chocolate back in the day was like sipping on a Rankin/Bass Christmas special, and ever since they switched to a more realistic rendering it’s just never been the same (even if it is only in my mind.) 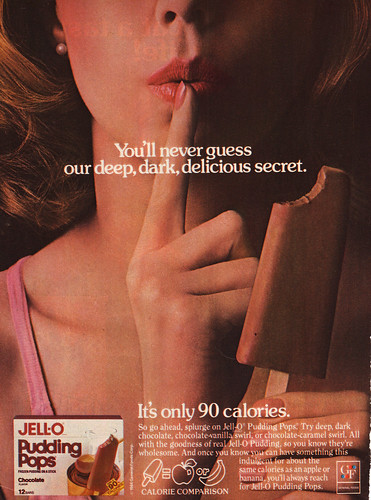 I think it’s interesting that the print ads for Jell-O Pudding Pops strayed away from using spokesman Bill Cosby, and instead focused on the guilt-free aspect of the frozen treat.  As this above ad from 1984 showcases, the pops only had 90 calories and apparently were just as good as eating an apple or a banana.  Insane nutrition claims aside, I do have to admit that, that is one heck of an attractive calorie count.  It brings to mind the other Jell-O frozen treat introduced in the 80s (1981 according to the Jell-O website timeline which suspiciously doesn’t even mention pudding pops, but I’m betting it was also in 1982 alongside the pudding pops), the Jell-O Gelatin Pops as seen in this 1985 ad… 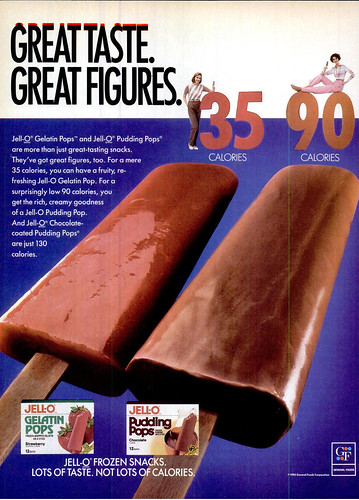 These fruit pops were only 35 calories and were a much slower melting bar because of the added gelatin.  According to the above ad, General Foods also produced chocolate covered Jell-O Pudding Pops, though I don’t remember ever seeing those for the life of me. 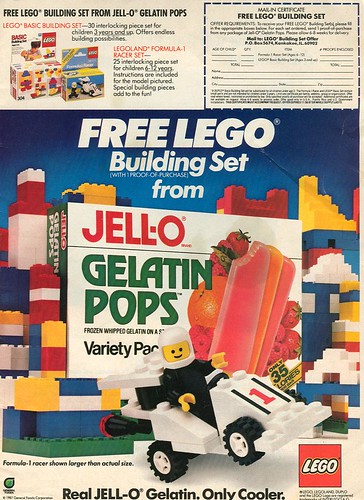 Unfortunately, sometime in the early 90s Jell-O Pudding Pops seemed to disappear from our grocer’s freezers.  My guess is that after the line-up of General Foods brands were merged in with the Kraft family of products in the mid 90s (as Phillip Morris owned both by that time), their frozen treats were dropped as Kraft didn’t really have a market share in the sweet end of the freezer section.  As far as the Swiss Miss bars go, your guess is as good as mine.  It wasn’t the last time we’d see Jell-O Pudding Pops though.  They made a small comeback in the early 2000s under both the Jell-O and Popsicle brands, but they weren’t the same product.  Offered in a slimmer Fudgsicle-like stick, the flavors and consistency just weren’t the same.  There’s also a Jell-O branded pudding pop maker for kids, though I’m guessing it’s not much different than sticking a pudding cup in the freezer.

Today there are still some brands of frozen pudding pops though, mainly Kemps and Blue Bunny, but this summer Coldstone Creamery is also presenting a variation on the Pudding Pop with Jell-O branded pudding ice-cream.  It’s not the same, but it’s as close as we’re going to get.

A Nasty Way to Kick of the Last Week of the Countdown!

Every wanted to buy a buttload of stickers all at once?

Ticking off the days with Ronald and his pals…