I recently had the opportunity to take a look at the Mill Creek re-issue of 21 Jump Street on DVD and I have to say that I was both a little excited about the set and a little bit bummed out.  First off, I have to make it clear that Mill Creek provided a review copy of the DVD, so I didn’t purchase this set.  I am, however, a fan of the show, and I already own a few of the seasons that were previously released by Anchor Bay on DVD.  So for whatever it’s worth, I’d like to believe that my opinions on the set and series are unbiased. 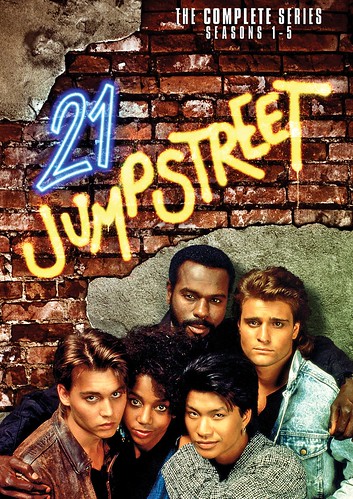 Part of the reason that I wanted to take a look at this set is that I feel like we’re entering an unfortunate stage in the life of DVD as a medium, and Mill Creek is leading the pack into the future.  After living through the first home video boom during the 80s and 90s with VHS, I knew the life cycle of DVD would be relatively short in the grand scheme of things, lasting around 20 years.  Introduced to the public in 1997, I think it’s safe to say that we’re now entering into the last stage of life for the format, its twilight years.  The signs are all around us with discount $3-$5 DVDs available in stores like Big Lots and Wal-Mart, and with a slight improvement of the medium already on the market (Blu-Ray.)  Pretty soon we’re going to see a shift in the releases of films and TV shows as some will only be available on blu-ray or for download, and only the most popular and profitable releases will garner DVD distribution.

So why is Mill Creek important in this scenario?  Well, in the last few years super discounted DVDs have usually consisted of old, discontinued or overstock titles that companies are trying to liquidate to recoup production costs.  Mill Creek on the other hand is leading the charge on first run releases in the budget format, so instead of getting an affordable price on a nicely manufactured set, we’re getting lower quality sets at great prices.  After years of releasing budget public domain fare, Mill Creek is now licensing TV series that other companies have discontinued releases for, as well as picking up the rights to some shows that have never been released on DVD.  One of their first big coups was in acquiring the library of Stephen J. Cannell productions including such shows as Hunter, the Commish, the Greatest American Hero, and 21 Jump Street.  All of these series have been released before, but not at budget pricing.  In addition to these well-known series, Mill Creek is also releasing a lot of Cannell’s lesser known series such as Ten Speed and Brown Shoe, Booker, and Cobra which have never been on DVD in North America (except Cobra which was released in Canada.)  I think this is going to become a trend for the medium in the face of rising music rights costs, especially for TV on DVD, and I’m kind of sad to see it.  I think if it’s successful then it’s going to prove to DVD distributers that subpar sets are perfectly acceptable.

So what about this new 21 Jump Street Complete series DVD set?  Well, being a budget release, the set is attractively priced between $60-$70, which isn’t bad for five seasons of television.  The original five sets released by Anchor Bay in 2004 would have easily set you back $150, so right off the bat we’re talking a 50 to 60 percent drop in price.  But this price reduction also comes with a drop in quality, both in the packaging, features, and in the video quality as well.  First off, the quality of the transfer is pretty close to the original DVDs, at least displayed on a regular player on a non-HD television, but there is a higher compression as there are more episodes per disc on this new set.   The original source material was rough to begin with though, and there’s only so much you can do to pretty it up. 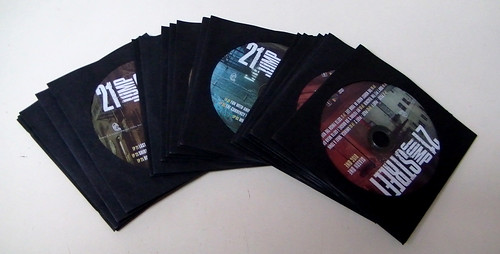 My biggest complaint though is with the packaging which is just medium to subpar.  Though the sets are packaged in clamshell-style cases, the DVDs themselves aren’t housed on individual pegs or spindles.  Instead they’re individually wrapped in plain black paper sleeves which stack together and sort of snap into a frame on one side of the case.  That means that when you want to pull out DVD #17, you have to pull them all out and sift through the sleeves, which can be a pain.  With a smaller set it’s not that big of a deal, but with these complete series sets it really gets to be a pain.

There are also no liner notes and no DVD booklet.  You want to know which episode guest stars Brad Pitt?  Go to IMDB and find it that way because you’ll be searching forever on the DVDs.  Again, with a smaller or season set this wouldn’t be that big of a deal, but with a complete series set it’s really a pain in the butt.  This is also a bare bones, no-special-features release (unless you count the single episode of Booker included in the set.) 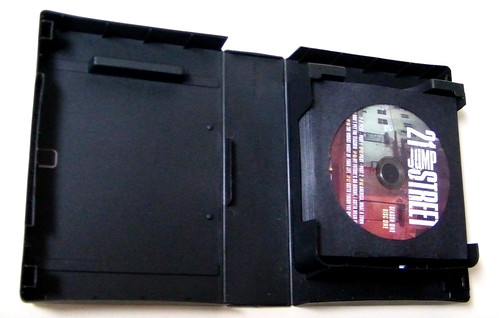 Unfortunately, as with the original release of the series on DVD, most if not all of the original music was also stripped from the episodes because of high song licensing issues.  This is the biggest setback for TV on DVD, and in particular with a show like this because the music helped to define the tone, and it provided a boost to the overall quality of the show.  Without the music the series feels so much more cheesy than it was when it originally aired and honestly it’s just a shame.

Talking about the series itself, 21 Jump Street is an example of Stephen J. Cannell at his most playful.  Starring Peter and Michael Deluise, Holly Robinson (Peete), Dustin Nguyen, Steven Williams (the X-Files), Richard Grieco, and of course a young Johnny Depp in his break-out role as Officer Tom Hanson, the show was sort of like the older brother to Saturday Morning cartoons in the 80s.  Usually centered on some hot-button topic of the day, the series was a fun spin on detective shows that gave the actors a lot of range to play all sorts of characters in their undercover roles.

The series is a snapshot of what the Fox Network was like during its inception as well, and helped to define a slightly hipper alternative to the normal programming on the main three networks.  It works best as a time capsule of late 80s television and features a plethora of up and coming and established actors in guest spots like Brad Pitt, Pauley Shore, Mario Van Peebles, Kurtwood Smith, Jason Priestley, Mindy Cohn, Bridget Fonda, Sherilynn Fenn, Josh Brolin, Christina Applegate, Vince Vaughn, John Waters, Shannon Doherty, and Thomas Haden Church. 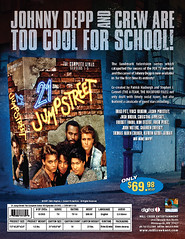 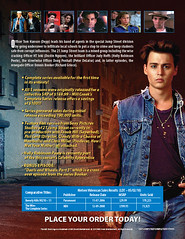 All in all, for the price, the set is probably worth picking up if you’re a fan and don’t already own the series, though I would wait for a sale.  Right now Best Buy actually has it for the astounding price of $38.

To me the series will always highlight the bittersweet experience of moving on from middle school to high school, and leaving the 80s behind.  It was the beginning of the end for the type of television that I grew up on, and it made the transition into the 90s a little less rocky.  You can pick up this set on July 27th, 2010.

Reclaiming another small piece of my childhood…