1977 is such an interesting year, and sometimes I feel lucky that I came into the world that hot summer in July.  Not only did I arrive just in time for the original Star Wars flick, but alongside were all sorts of crazy and groundbreaking events like the introduction to the world’s first personal computers (the Commodore PET and the Apple II), Fleetwood Mac released Rumors, The Clash released their first album, women of the Navy and Marines sub-units were officially welcomed in as part of the Navy and Marine Corps, Elvis Presley, William Castle, Marc Bolan, Charlie Chaplin and Groucho Marx all passed away, the Atari 2600 was released, smallpox was eradicated, and the television channel Pinwheel (that would come to be known as Nickelodeon) was launched.  But in all the hubbub, a very important breakthrough was lost in the chaos; assuredly the most unrecognized advancement in men’s trouser technology makes its stunning debut in August of 1977, Century Martial Arts’ Kickin’ Jeans!

Way back in 2006, during my first year in blogging, I shared an ad for these ferocious fighting jeans, and I thought that it was high time that I did a more in-depth examination into the wonder of the modern no-tear assault jeans made famous by the one and only Chuck Norris.  Though the Century brand Action Jeans are probably the most popular, they were certainly not the first jeans to make the “Action Jeans” claim.  That officious proclamation would probably have been made by Lee Jeans back in 1957 with their Rider branded trousers.  Fit for rugged cowboys, these Lee jeans were endorsed by none other than legendary rodeo star Guy Weeks.  Proclaiming strong stitching, these jeans were possibly more intense because of their patented U-shaped crotch, which is really the feature where all the action really comes together as we’ll see in a moment.

As you can see in the original ad for what, at the time, Century was calling Kickin’ Jeans, the secret is in the gusseting.  So what is gusseting you ask?  Well, it involves sewing in a diamond-shaped piece of fabric into the seams of clothing to create a more comfortable fitting garment.  I first learned about gusseting from the film, The Silence of the Lambs.  In the scene in which Jodie Foster makes the connection between Buffalo Bill and one of his first suspected victims, she notices a dress that has the triangular gusseting patterns that clearly match the diamond-shaped patches of missing skin from some of his other victims (since he was making a woman suit and all.)  Gruesome to be sure, but interesting none the less.  It’s this give in the fabric that lets the wearer of Kickin’ Jeans get the range of motion required to round kick a goon in the head while also looking stylish and fetching in jeans that aren’t ripped and torn from all the aforementioned kickery.

In doing some research into these warrior jeans, I believe I have managed to bring together most, if not all, of the known pieces of Kickin’ Jeans advertising.  I’d like to share them with you now… 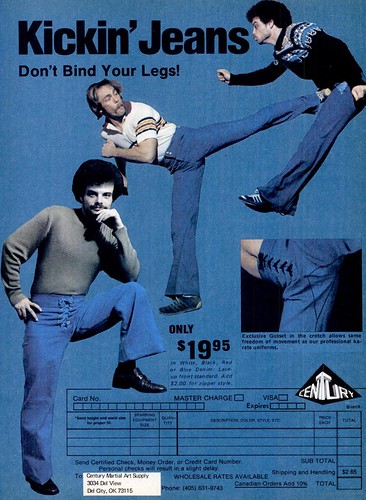 First off, most of these ads come from back issues of Black Belt magazine, a staunch supporter of the remarkable jeans between 1977 and March 1991 when the miracle product seems to fall off the face of the earth.  The original black and white ad at the top ran in Black Belt from August 1977 throughout 1978.  But in January 1979 we got our first look at Kickin’ Jeans in astounding full color (above.)  This is probably my favorite ad for the product, mostly because of its obvious dated cheesiness.  But I also have to hand it to the designer as he felt it was a good idea to have the main jean-model both strutting his stuff all posed up front, while simultaneously getting the crap kicked out of him in the background.  I think that’s what these jeans promise in a nutshell, great fashion and ass-kickery. 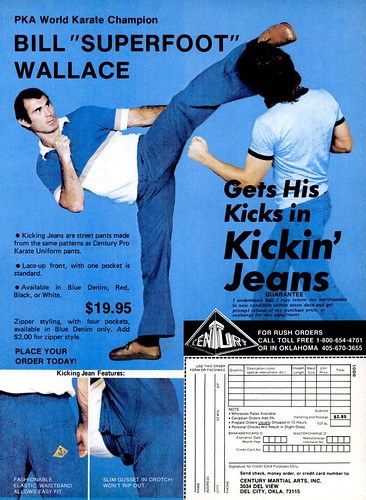 Then in 1980 Kickin’ Jeans got a huge proverbial kick in the ass by scoring a promotional deal with Bill “Superfoot” Wallace, a recognized athlete and kickboxing champ.  In my humble opinion, Superfoot brought these wonder pants out of obscurity and into the lime light.  Well, at least the lime light in the niche world of martial arts enthusiasts, which was a pretty burgeoning crowd in the late 70s, early 80s. 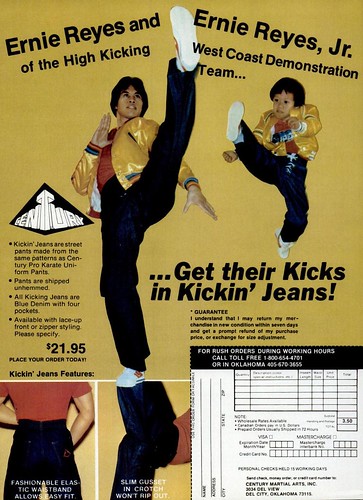 If Superfoot was a boon to the benefit of conformability while performing a roundhouse on someone’s all-too-deserving head (all while wearing stylish jeans), then in 1981 Ernie Reyes Sr. and his 9 year-old martial arts prodigy son Ernie Jr. must have been an explosion of epic proportions (though not an explosion strong enough to rip the Kickin’ Jeans mind you.)  Is it just me or does Reyes Jr. look like he’s 4 years-old in that ad (and able to kick the living hell out of anyone’s butt at the same time?)  Ernie Reyes Jr. was sort of a big deal in my circle of friends during the 80s and early 90s as he starred in one of my favorite childhood television shows Sidekicks, and would go on to do all of the in-suit martial arts for Donatello in the Teenage Mutant Ninja Turtles live action film (and its sequel, Secret of the Ooze.)  If you don’t remember Sidekicks (also starring Gil Gerard of Buck Rogers fame), here is a horrible copy of the intro on youtube, as well as the pilot episode (part 1, part 2, part 3, part 4, & part 5.) 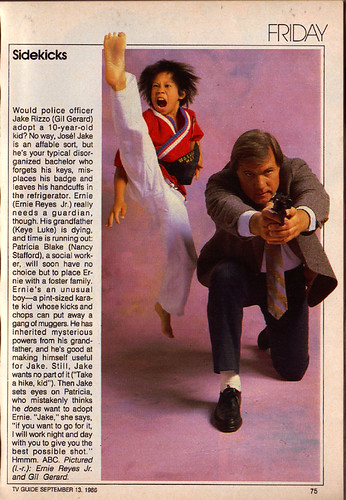 But it was in 1982 the pants really hit the fan (to mix my metaphors) when film legend Chuck Norris endorsed the slacks.  Not only did he endorse them, but the company renamed them for the first time, this time to Karate Jeans… 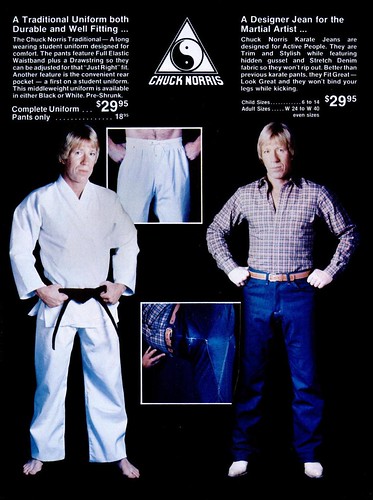 This was a short-lived change though, as later in 1982 the jeans would go through their second and final branding change, this time to the less exciting, but much more hilarious Action Jeans!  If you’ll notice, the difference is all in the mustache apparently, as that’s the only difference I can see in the two ads.  But a Chuck Norris mustache is unlike all other lip hair.  It’s got 300% more action than any other mustache, and 10% more appeal than the second most popular lip hair, the mustache of one Rollie Fingers. 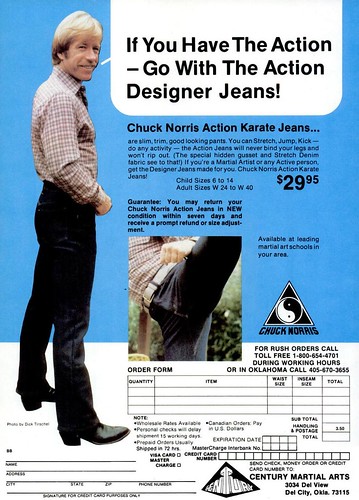 The genesis for this whole article comes with this next ad from 1983.  Featured in the back of Boy’s Life magazine, we again get a chance to see Ernie Reyes Jr. wearing the amazing jeans, though this time they’re Chuck Norris branded.  I’m glad to see Norris sharing the lime light here.  I was kind of shocked to see an ad for these jeans outside of Black Belt magazine, and it’s really what drove me to compile all these ads.  Also, it’s strange to see that Norris was selling these jeans under his own company and not through Century… 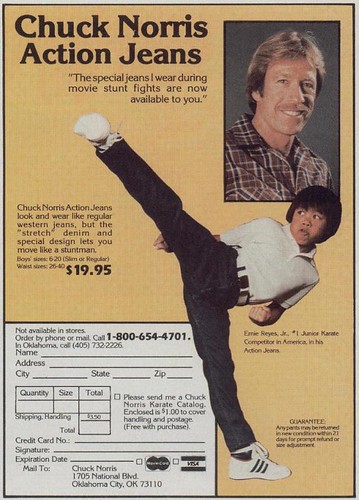 Between 1983 and 1984 we got a much more friendly and toned down Action Jeans ad featuring Norris, who is much more at ease than his first advertisement.  I think he was really enjoying his mustache at this point in his career. 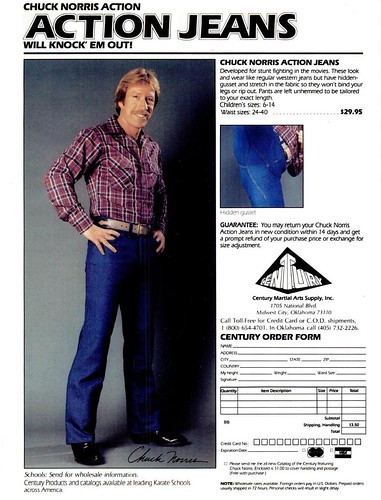 In 1985 though, things get ferocious again, as Norris sprouts a beard and brings back the kicking to Action jeans (going by conventional Norris philosophies, I believe he grew the beard on command five minutes before this photo was taken.)  This is the ad I’m most familiar with, and it was representing potentially his most successful years endorsing the jeans as it’s the one that ran the longest (from 1985 to early 1989.)  If you were wearing Action Jeans in the 80s, chances are this is the advertisement that got you to slip on your first pair. 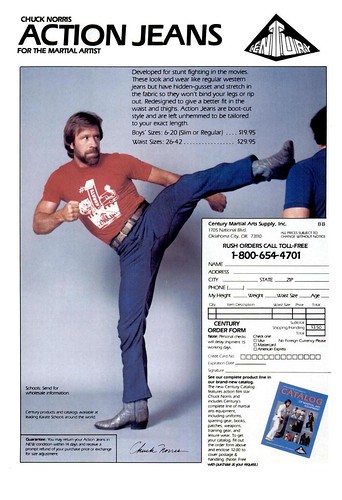 Awesome doesn’t last forever though, and there would only be one more Action Jeans ad produced, appearing in 1989.  By the 90s Norris was really taking charge of his merchandising empire though.  Well at least he was taking charge of these branded jeans, as this is the one instance where you can see that they have his official signature stitched onto the ass pocket.  Hopefully this is the last thing criminals and evil doers saw before your leg whipped around and kicked their head clean off their shoulders.  At least that’s what I imagine wearing these pants was like. 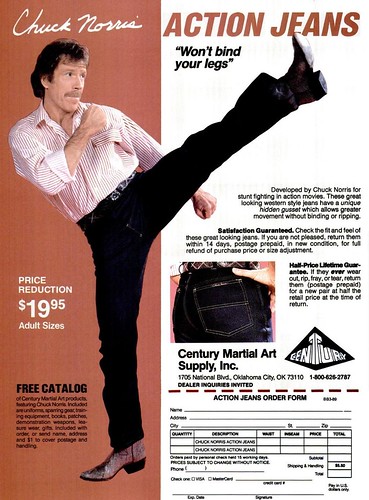 This final ad ran in Black Belt magazine until March of 1991 when the Norris empire was starting to crumble.  The world was moving on to Steven Segal and Jean Claude Van Damme, and so was Black Belt magazine.  Sure it still featured Norris, but not to the extent where he was in every single advertisement.  And there was no room in the world for Action Jeans.   But this isn’t the end of the story.  Kicking jeans would get a second life in 2002 thanks to the good people at Diamond Gusset Clothing.   It was a return to basics with the emphasis back on crotch comfort and style… 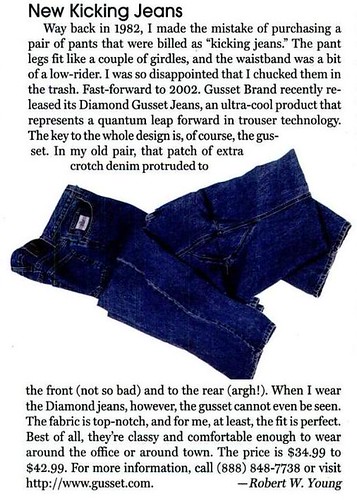 Though Century Martial Arts is still in business today, they no longer carry the coveted fighting jeans.  Your only option for comfortable ass-kicking jeans lies with Diamond Gusset, but at least these aren’t completely forgotten relics of a bygone era.  People can still believe in high kicking without embarrassing rips and tears.  The legend lives on.

Just in time for pre-Thanksgiving preperations, the next volume of G.I. Joe on DVD…

Cartoon Commentary! is back, KINDA!

Creepy advertising for the Spiral Zone