Like most movies, what we’ve seen of the Goonies on film and in the advertising isn’t all that was written, shot, or illustrated.  Aside from variations on advertisements and movie posters, there are also some infamous deleted scenes, namely one involving a break-dancing octopus and the forgettable soundtrack entry, “Eight Arms to Hold You”, as well as the convenience store run-in the Goonies have with the douche-y Troy Perkins.  Luckily these were (for the most part) included as outtakes on the 2001 Goonies DVD release.  There are more though, that haven’t made their way to home video.  Just like the clues left behind by One-Eyed Willie, these remnants of early script drafts and possibly completed, filmed scenes have found their way into other sources.  Today I’d like to explore some of these hidden gems.  First though, I need to give a ginormous shout out once again to Vinnie Rattolle for contributing some wonderful ephemera and taking the time to share it with me.  You’re officially a Goony in my book!

Sort of like the souvenir magazines of the 80s, another great place to find some obscure odds and ends for films was in the various adapted novels.  I remember reading the novelization of the first Tim Burton Batman flick that had entire subplots that were excised from the final film including a chase on horseback and much more with Knox, the Gotham reporter played by Robert Wuhl.  Well, Vinnie sent me some scans from his storybook adaptation of the Goonies that reveals some similar gems… 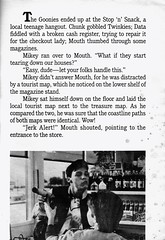 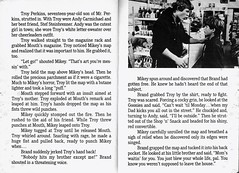 First a little insight into the convenience store scene which takes place after the gang first sets off to try and track down the X on the map, but before they end up at the Fratelli’s hideout.  Basically they make a pit-stop at the Stop ‘n’ Snack for some provisions.  Mikey finds a road map of Oregon and compares it to Willie’s map and realizes that the coastline is identical, so not only is Willie’s map real, but they’re also really close to where the treasure might be buried.  Before Mikey can share this with the gang Troy comes into the store with Andy and Stef in tow and then like the douche he is, he starts picking on the Goonies.  At one point he gets a hold of the map from Mikey and he rolls it up and lights it like a cigar.  Mouth and Mikey try to take it from him, which pisses him off and he cocks his fist back to hit Mikey.  At the last second Brand comes in, catches Troys fist starts pushing him around.  Long story short, Brand saves the day and confiscates the map.  That’s where the scene cuts out and story wise it picks back up when Chunk, Data, Mouth and Mikey find the Fratelli’s hideout. 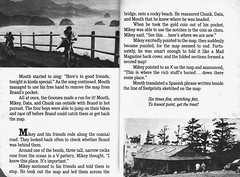 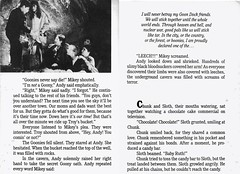 So how did the gang get the map back?  Well, according to the storybook Mouth secretly swipes it from Brand (while singing a song to distract him) and then the four Goonies make a mad dash out of the store and evade Brand for a second time.

There’s also a bit of secret foreshadowing involving the concept of Mad magazine-style paper fold-ins.  Mikey’s grabs a Mad issue at the beginning of the flick and there is also a stack of issues on display next to the Oregon map in the convenience store.  As it turns out there is a similar puzzle to Willie’s map.  When you fold it in, it creates a secondary map that more accurately points out the location of his treasure.  You get a bit of this in the outtakes on the DVD, but it’s never explained as clearly as it is in the storybook!

The next reveal involves the Goonies oath and is a scene I’d never heard of revolving around the scene under the wishing well where Andy is torn between the idea of sticking with the Goonies or getting help from Troy.  After Andy decides to stay “down here, where it’s our time”, Mikey initiates her into the Goony-hood by having her recite the oath.  Immediately afterward the whole gang realizes that they’re covered in leeches, a good year before Corey Feldman would find himself in a similar predicament in Stand By Me.  I’m curious if the scene was ever shot?  I could see it being a bit much after the attack of the bats and the fact that it would have nothing to do with Willie’s booby traps. 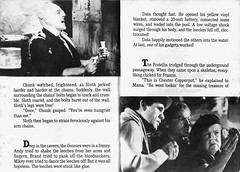 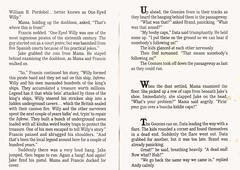 It’s also interesting that in the storybook, Francis Fratelli is revealed to be somewhat of a local history buff as he knows the whole back-story of One-Eyed Willie and fills in his brother and mother after they start tracking the kids and they end up at Chester Copperpot’s body.  I guess when he wasn’t setting local police departments on fire and buying toupees, he was spending his afternoons under the tutelage of Mikey and Brand’s father at the local museum.  It’s also in the bit in the storybook that One-Eyed Willie’s real name is reveled to be William B. Pordobel… 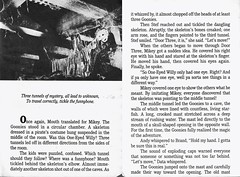 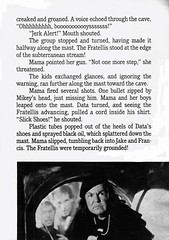 The last cool bit involves another booby trap on the way to finding the Inferno.  The gang is confronted with three passageways and an odd rhyming clue on the map which reads:

“Three tunnels of mystery, all lead to unknown, To travel correctly, tickle the funnybone.”

One of the passages has a skeleton by it, and after Mikey tickles the dead pirate’s funny bone a second skeleton shoots out of the middle passage.  Another tickle and this new skeleton points to one of the tunnels, though it may not be the correct one.  It’s sort of an odd little puzzle, and again I have to wonder if it was shot or left in the script?