I just wanted to take a second and point to a really great comics event coming up for anyone who might happen to be in the Dearborn, MI area on June 12-13.  It’s called Kids Read Comics… 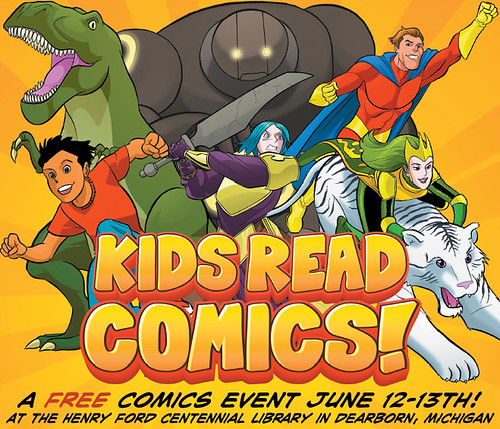 I think the event is best summed up on it’s about page, so I’m just going to crib their description…

“Generations of kids have grown up reading and loving comics.  And it’s not hard to see why comics have captured the imagination of kids and teens — with their unique blend of words and pictures, even the most everyday comics stories open up worlds of wonder.

And beyond the sheer joy of comics is the fact that they can help turn kids into more active and engaged readers.  They also provide a model for young readers to explore and develop their own creativity.

But comics are no longer the mass medium they once were.  Far fewer kids are exposed to them today, and many of the comics they find are intended for older readers.  That’s where Kids Read Comics comes in!

Our Kids Read Comics Convention is a totally free event that unites kids, teens, parents, teachers and librarians with professional artists and writers from the comics and animation fields.  Our goal is to introduce kids to worlds of imagination while unlocking their creative impulses, and to serve that goal, the convention features:

-panels and presentations for kids, families, and educators

-the opportunity for kids to have their own art portfolios reviewed

KRC also works throughout the year to promote comics and creativity for kids and teens.  We’re building a recommended reading list; gathering resources for parents, teachers and librarians; and organizing artists and writers who can bring presentations and workshops to libraries around the state of Michigan and beyond.”

So again, if there are any readers in the Dearborn area, check out the show.  There are going to be a ton of great creators tabling and giving workshops, and it’s also a good opportunity to get an idea of how the Up! Fair will be handled in November.   Check the website out at Kids Read Comics!