Eat your vitamins and turn your little sister blue with fear…

I’m about a week late with this as far as the 30th anniversary is concerned, but I ran across this ad in an old 1983 Woman’s Day magazine for Pac-Man vitamins that I thought was kind of neat. 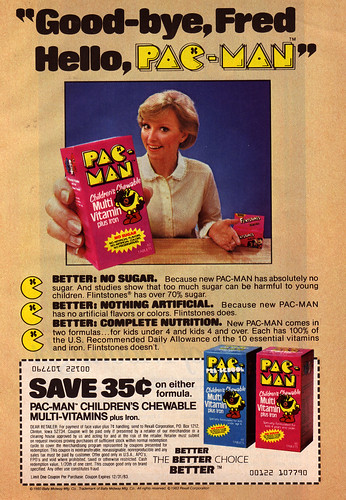 I have to admit that I was a Flintstone Kid when it came to my chewable vitamin intake.  I think I was vaguely aware that there were other cool vitamins out there, but I never made it a habit to stroll down the heath food aisles of the grocery store when I was a kid (not when my local Albertson’s had a full on toy aisle packed to the gills with G.I. Joe, Transformers and M.A.S.K. figures and vehicles.)   You’d think there would be room for all sorts of vitamin branding, but according to this ad, if there’s one thing in the world that Pac-Man wouldn’t eat, it’d be Flintstone vitamins.

I wonder what shapes these came in?   On the one hand it seems pretty obvious to have little Pac-Men, and multi colored ghosts, but on the other I think it would have been so cool if it were just a mix of pellets, power pellets, blue ghosts and the miscellaneous fruit and pretzels that Pac-Man chomps on in the game.   Anyone out there remember what these were shaped like?

Return of the 31 Days of Monsters, Day 19: Which came first, the Ghostbusters or the Real Ghostbusters?!?