Silverhawks, Part 1: A Rainbow in the night…

I realized the other day that while I’ve been making a concerted effort to make my way through piles of magazines, books, and other vintage papers top share on Branded, I haven’t really made a dent in my cartoon collection either.  There are a lot of shows that I loved growing up, as well as a ton of others that I remember fondly, that are just sitting on my DVD shelves begging to be written about.  I think I’m going to try and correct that over the coming year.

Today I want to talk about one of the shows that I was so excited about as a kid, I’d speed home on my bike as fast as I could each day afraid I’d miss an episode.  As I careened home at light speed, I’d literally jump off the bike, letting it fall into a crumpled heap, and then I’d sprint into the house past my mom and any potential waiting snack to flip on the TV so that I wouldn’t miss the opening credit sequence of the Silverhawks.  No joke, as my mom wandered off to close the front door that I’d left wide open, I’d be almost screaming “Tally Hawk!” at the top of my lungs along with the Silverhawks theme song as it played out on the TV before me.

For some reason I have some very vivid memories of actually singing along to the Silverhawks theme song, much more so than any of the other cartoons I used to watch after school.   I’m not sure exactly what it was about the song, but it combined with the breathtakingly pretty animation must have been pure sugary eye-candy for me as a kid.  Though there were anime overtones to shows like G.I. Joe, Dungeons and Dragons, and Jem (which were all animated by the Japanese studio Toei), it was with the Rankin/Bass cartoons that I feel like I really got my first taste of Japanese influenced animation.  Aside from the well rendered illustration in the cels, these RB productions, Silverhawks and ThunderCats in particular, were also edited with a skilled eye towards action.   At the time I’d never seen characters that were so dynamic and fast.  The animation studio responsible for these Rankin/Bass productions was the Pacific Animation Company, which had alumni like Hayao Miyazaki and some of the animators at Studio Ghibli, so the talent pool was certainly high quality.

Much like its sister show, the ThunderCats, the Silverhawks series opens with a two part origin story titled, oddly enough, Origin Story & Journey to Limbo.  Honestly, there isn’t much to these first two Peter Lawrence scripted episodes aside from a lot of story setup where we’re introduced to practically every reoccurring character in the cast (good and evil) and their capabilities.  The first episode is framed as a status report filed by Commander Stargazer who keeps watch over the edge of the galaxy in the space station Hawk Haven (odd because the Silverhawks proper haven’t been introduced and there’s no explanation as to why there is an avian theme.)  His report centers on MonStar, the most unruly and probably the craziest mob boss in the galaxy, who has just broken out of an intergalactic prison and has started putting his gang of ruthless criminals back together.  Stargazer is requesting help in dealing with the menace when we switch perspective to Earth where a group of soldiers and an alien from the planet of the mimes are in the process of being retrofitted with cybernetic enhancements so they can both combat MonStar and survive the trip to Limbo where the series takes place.  Calling upon the tagline of the series, an alien scientist (in his best Bela Lugosi impression) states that to make the trip to Limbo the group must be “…partly metal and partly real…”  This is actually a phrase that’s used ad nauseam in these first couple of episodes, to a point where it’s almost comical.

As far as design and concepts go, I think these Rankin/Bass cartoons are the culmination of five years worth of industry expansion and benefit from the freedom animation studios were gifted with by first run syndication and the softer intervening hand of government “regulations”.  In the explosion of televised cartoon creativity, the Silverhawks and ThunderCats are in my opinion, the resulting mushroom cloud; big, beautiful, and airy.  The one aspect where I think Silverhawks really excels is in the iconic character design of the series, in particular with its villains.  Rankin/Bass used very similar templates with their shows, but the archetypes they chose, in particular those of the villains, were flat out insane and unlike any other cartoons.

MonStar is just crackling with energy and truly frightening aspects, from his mane of wild, flowing black and red hair, to the jagged edges of his twisted mouth and dangerously sharp teeth.   Add to this his black body suit, shiny red chest plating, imposing eye-patch, and his wicked sharp fingernails and you have the makings of a truly scary villain.   But that’s just one half of the character’s design as the Rankin/Bass villains tend to have two forms, one that plots and schemes and a second outfitted for battle.   Using the fiery rays of the Moonstar of Limbo, MonStar can transform into a formidable evil knight with organic red armor platting and spikes all over his body.   His original appearance is mimicked in the armor design with sharp spikes jutting out of his head like the character’s hair and beard, a row of interlocking spikes for teeth, and a black star over his left eye.   This secondary design also mimics the metal bodies of the Silverhawks, which seems to be outfitted for self-contained sojourns into space (even including rocket boosters in his elbows for propulsion.)

This process of transformation is so tangible and visceral.  You can almost feel how disturbingly painful it is as the skin and hair is literally ripped from MonStar’s body while it turns into his armor.   His screams of rage, pain and glee are truly insane, taking the typical megalomania of cartoon villains to another realm entirely.   As a kid, and even now as an adult, I found it completely and intoxicatingly riveting.   No other cartoon villains come even close to matching the ferocity and downright freakiness of MonStar (except Mum-Ra from the TunderCats, which again is also Rankin/Bass), though he’s certainly rooted in the same traditions.   Not only his he visually imposing just by himself, but he also has an indentured, intergalactic steed, a giant squid named Sky Runner who goes through a similar transformation process (initiated by MonStar firing a pink “Light Star” from his eye) that also seems to speak to the transformation of Cringer into Battle Cat on the Filmation He-Man cartoon.   Sure, Skeletor had Panthor, and Cobra Commander had Scrap Iron and Major Bludd, but none of these cartoon villains ever had to intimidate and force their henchmen into subservience.

MonStar runs his mob out of a gnarly castle located deep within a planetoid, which looks like a cross between a giant spiraling drill bit and a torture device.   The set design is wonderful and creepy, in particular MonStar’s throne, which is surrounded by the picking fingers of some rusty machinery that resembles an overturned spider.  When MonStar initiates his transformation sequence, the arms curl upwards creating a sort of star shaped filter for the Moonstar rays to shine through.  Also, on a side note, in another bit of crazy over the top design, to catch the rays of the Moonstar, MonStar’s planetoid needs to be repositioned. His henchman, Yes-Man, operates the controls of some ginormous booster lasers that shift the entire planetoid into the Moonstar’s beams which just seems crazily over the top…

Continuing along with the superb character designs are MonStar’s eight main henchmen.   First up there’s the sickeningly loyal afore-mentioned Yes-Man, a snake-like alien with a dour expression and a penchant for saying “Yes boss…” to every command.  With his curving spine and head drooping down below his shoulder line he comes off as a completely slimy character that will turn on you at a second’s notice.   Yes-Man, like most of the characters are one note, but there’s a purity to there simplistic design that makes them not come off as interchangeable. 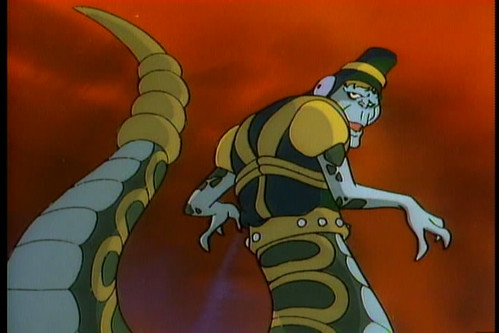 Next we have the generically-named Buzz-Saw, who is a robot with launch-able circular saw blades for hands (he also has them on his shoulders, as well as one adorning his head like a Mohawk.)  Though I’ll get into it a little more when I discuss the second episode, Buzz-Saw, though sentient, is a weirdly disposable character who gets blown up more often than simply defeated.  I think it’s really odd to have this type of dynamic with a character, even if it is a robot.  On a separate note, we have Mumbo Jumbo, a fire-breathing robotic Minotaur.  Since his character design is much more organic with his animalistic features and body, I’d be willing to bet that he doesn’t fit into that same disposable camp as Buzz-Saw.  I wonder if this sort of nonchalance towards robotic destruction stems from the depiction of C3P0 in Star Wars, in particular the scenes in Empire where he’s blasted into pieces.   Though it should have come off as disturbing, it was more comedic because he not only survived, but goofily complained for the rest of the film.

There’s also Windhammer, a pale blue-skinned warrior with a giant tuning fork that he uses to control cosmic weather (meteors, wind, lightening, etc.)   I think it’s interesting that the artists and writers of the show chose an almost god-like theme for his design.  He’s decked out very simply in a raggedy tunic, which with his flowing hair and Thor-like tuning fork really evokes a the design of a Roman or Greek god.   Again, sort of like the general design of Mumbo Jumbo, Windhammer comes off very organic in a very inorganic futuristic setting.  On the other hand we have Mo-Lec-U-Lar who has the oddest looking design of the bunch.   He’s resembles an atom, with bulbous protons and electrons, and can shape-shift into other forms, but for all intents and purposes he looks like one of the Fruit of the Loom characters.  I’m not a huge fan of his design as it’s a bit too bulky and feels out of place with the rest of the series’ design elements.

Conceptually the strangest of the mob is Poker Face, a slick looking cyborg with slot machine eyes and a tuxedo.  I think it’s strange that his design is so much more comedic than the rest of his counterparts, in particular when compared to MonStar.  Stealing a bit of the character design of Slythe from ThunderCats is Hardware, a squat reptilian alien who is a master engineer and weapons maker.   Last, but not least and probably my favorite, is Melodia, the new-wave musician who can literally create havoc with her futuristic laser keytar.  Also as a quick aside, Maggie Wheeler provided the voice of Melodia.  She’s probably best known for portraying Janice, the woman with the single most annoying voice known to mankind on Friends.   Anyway, what really jumps out at me is that the artists and writers truly exhibited the idea that nothing was off the table when designing some of these characters.   For example, Melodia fires lasers from her keytar that resembles a long string of pink electric sheet music, complete with musical notes and a jamming soundtrack to boot.   Typically that’s the sort of thing that works well on a comic book page, but would be really difficult to pull of in animation, though I think they do it well.

I think I’ll end this here and pick up with the heroes, as well as more of the design and conceptual elements when I get into episode 2 later in the week.

Return of the 31 Days of Monsters, Day 8: The Grundel!

Of Speeder Bikes and Jungle Gyms…