After reading Adam Eisenberg’s Thundarr article from a 1980 issue of Fantastic magazine earlier in the week, I’ve been thinking a lot about the issue of violence and marketing in cartoons, and the whole debacle of Action for Children’s Television in the early 80s.  9.999 times out of 10 there are usually only two reactions to the debate; people either tend to agree with A.C.T. and believe that merchandised cartoons are just 30 minute commercials that have almost nothing to offer children, or they disagree and don’t see the harm in matching toy lines and feel that cartoons are either good for kids or are at least not doing harm.  It’s easy to forget that even though the issue appears black and white, the world is always a weird gray place filled with all kinds of people (that 0.001 out of 10 people.)  For this Cartoon Commentary I’m going to take a look at someone else’s commentary for a change…

Steve (the Evil King Macrocranios) over at the Roboplastic Apocalypse pointed me to a April 25th, 1985 Washington Post editorial by Jane A. Welch, a concerned mother of two who has the most unique (at least I hope so) opinion of the merits of the He-Man and the Masters of the Universe property I’ve ever come across… 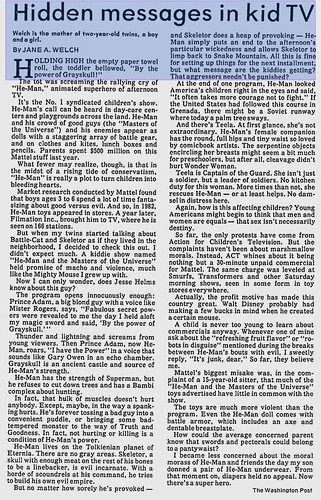 First off, though Welch’s editorial reads like the semi-crazy ranting that tends to get buried in the lifestyle section of a local paper and is really yesterday’s news on the day it sees print, the story actually caught on.  While doing a bit of research in trying to pin down the impact of Welch’s rant I came across a number of other papers from all over the country that picked up the editorial, so this was most likely Welch’s fifteen minutes.

So what is so crazy about Welch’s commentary?  Well for starters she takes the unique stance that Filmation’s He-Man cartoon has the potential to turn her then two year-old son into a bleeding heart pantywaist!  For once, a parent stands up and says that there isn’t ENOUGH violence in a cartoon and that morality of avoiding fighting and violence is downright un-American.  Welch might just be a long lost relative of Roger Sweet, the initial creator of the Masters of the Universe toy line for Mattel, as she seems to closely mimic his feelings towards the Filmation version of the He-Man storyline.

There are a couple things that I find really interesting in the editorial including the idea that the cartoon and toy line differ so much in execution and tone.  Whereas the toys were designed in the image of fierce warrior barbarians with axes, swords, and rippling muscles, the cartoon, which uses most of the same imagery, all but ignores these violent aspects of the characters in favor of moralistic, fable-like storytelling where He-Man is more likely to thrown Beastman in the mud then physically harm him in any way.  Though this dichotomy is apparent in most cartoon merchandising, it points to the underlying issue that’s really been bugging me about how my generation appropriates pop culture icons.

What I’m seeing is an issue of potential and the wish fulfillment of seeing that potential realized based on the idea of “how things work in the real world.”  So when we have a character like Superman/Clark Kent who is ripped with an unstoppable alien musculature powered by Earth’s yellow sun and very rarely unleashes the full brunt that he can dish out, it’s understandable to want to see this potential released.   What’s more maddening than a cocked gun that isn’t fired, right?   People want to see Superman punch a fist-sized hole right through Lex Luther’s head, because A) he’s got it coming, B) Superman could totally do it if he wanted to, and C) in the “real world”, if a Superman existed, he probably would do it for the “greater good”.  I think the quest set in front of the writers of this type of fiction is how to balance character potential and relatable character depth without breaking the character.   As an aging audience, I think more and more we want to see these characters broken.  As children everything is still new to us and we’re content with going along on the adventures that have limitless possibilities, and this makes serialized stories and ideal experience.   As adults we develop a different perspective on life.  We don’t see limitless possibilities, we see stark reality and the eventually of our own mortality.  Add to this the possibility of a long time familiarity with a character and it’s easy to see how we can take them for granted and want to go to that next step, the step that changes that character forever.

For fear of standing up on a soapbox, I think I should get back to the crazy editorial.  Welch complains that a character that illustrates such obvious violent potential that is never realized sends the wrong message to her son.  The idea that her son isn’t getting enough machismos, that he might learn to solve difficult issues with forethought and compassion actually scares her, which I think is so absurd it’s hilarious.  Even more surprising is her apparent stance on politics of gender, in particular in how it relates to the dynamic between Prince Adam/He-Man and Teela.  She writes:

“And there’s Teela.  At first glance she’s not extraordinary.  He-Man’s female companion has the round, full hips and tiny waist so loved by comic book artists.  The serpentine objects encircling her breasts might seem a bit much for preschoolers, but after all, cleavage didn’t hurt Wonder Woman.

Teela is Captain of the guard.  She isn’t just a soldier, but a leader of soldiers.  No kitchen duty for this woman.  More times than not, she rescues He-Man – or at least helps.  No damsel in distress here.

Again, how is this affecting children?   Young Americans might begin to think that men and women are equals – that sex isn’t necessarily destiny.”

At first blush I was taking this for sarcasm, that Welch was going to make a point about how even though she thinks He-Man is a bit of a emotional cream puff, at least Teela is handled as strong and independent.   But in re-reading it I don’t think she’s kidding.   I think she yearns for a more subservient female role model, which is strange since she brings up Wonder Woman, who’s about as strong and independent a role model for women there is in pop culture (well, except for maybe Xena.)

I want to believe that the whole editorial is a joke, or more accurately that it was snidely disguised social commentary with a tongue firmly planted in the writer’s cheek, but I’m scared that it isn’t.  What’s troubling is that in the version carried by some of the other papers, the editorial is edited, removing some of the more troubling exclamations about gender roles and at the time current American military skirmishes.  The above exceprt about Teela is reduced to the following when the editorial appears on May 8th in the Orlando Sentinel:

“…and his female companion, Teela, is a decidedly modern woman.  She’s not only a soldier, she’s a leader of soldiers.”

The question I have is, are editorials edited by the paper’s staff, or did Welch submit her thoughts to various papers in different iterations?  Either way, the clear message of useless morals and backward antiquated roles for men and women is absurdly hilarious and just a little bit frightening.  If the editorial was published as widely as it appears, I can only hope it made its way into the Filmation studios because I think I can still hear the laughter echoing from those hallways after 25 years, and it’s deep, rich and “…sounds like Gary Owens in an echo chamber…”