Peel Here #100! Celebrating 100 columns with my favorite set of stickers from the 80s!

Psychologically speaking, the urge to collect is a very strange thing.  As a kid I wanted to collect everything, and at one point or another I had had amassed stacks of all the usual suspects: stamps, toys, books, baseball and non-sports cards, comics, and stickers.  Anything that even somewhat struck my fancy became fodder for a collection though, and at times that meant Metallica pictures and clippings, old tickets to Disney World, and all of the Batman ephemera I could get my grubby hands on during 1989.  The most obvious hurdle as a child with a burning need to have as many G.I. Joe figures and Mark McGuire baseball cards, was money.  Though I was well versed in the black market of neighborhood trading circles, I was never all that crafty and ended up happily dumping entire collections in trade for a single dazzling item that caught my eye.  As an adult entrenched in and fascinated by the discussion of nostalgia, I curse myself all the time for my foolhardy ways as I have very little of my actual childhood treasures left.   I can still recall the moment when I traded away all of my Garbage Pail Kids sticker cards for a collector’s case of Micromachines.   The tiny cars seemed so much more interesting at the time and little did I know that 20 years later I’d regret that decision.

What’s weird is that as the years have slipped by my collecting habits have changed drastically.   Even though as an adult I’ve overcome hurdle of expense inhibiting my urge to collect, I’ve calmed to a point where I’ve been able to patiently wait in acquiring stuff.  The urge to have all sorts of stuff is still there, in particular in rebuilding the lost collections from my youth, but I’ve learned that just having the items is sort of hollow.  That doesn’t stop me from picking stuff up, the main difference is that I know that eventually I’ll find most of the stuff I really want cheaply if I’m patient.  Such is the case with one of my all time holy-grail items, the highly coveted (by me at least) 2nd series set of Garbage Pail Kids released by Topps in 1985… 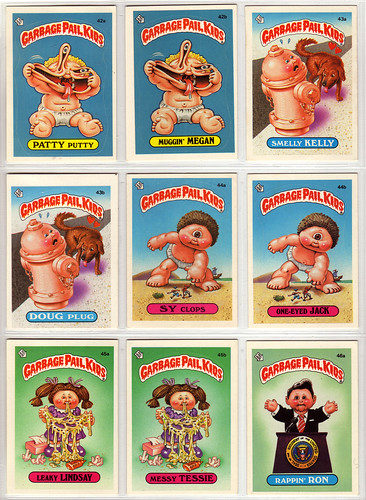 As a kid I started collecting GPKs around the time that the 3rd series was released and, as I’ve mentioned before, it was difficult finding cards in the area where I grew up.  My parents found cards for me at gas stations around town, but a lot of the stores that I frequented didn’t carry them, or I never got a chance to really go to the ones that did.  I did happen upon some rack-packs of 3rd series stickers that had some 2nd series included (one of the three sections of cards contained a pack of 2nd series), but for the most part my only option for finding any 2nd series came through trading.   Kids were very cautious when letting go of this series (though there wasn’t a moratorium on trading these like there was on the very rare 1st series cards), and I only ever managed to get a handful of cards from the set. 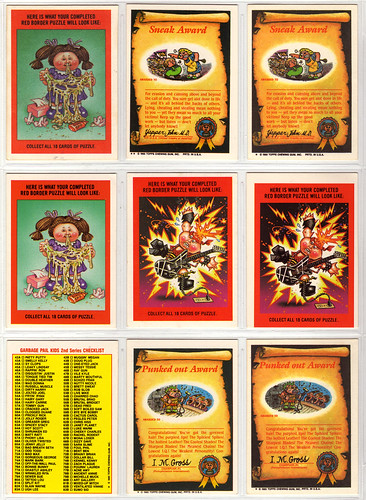 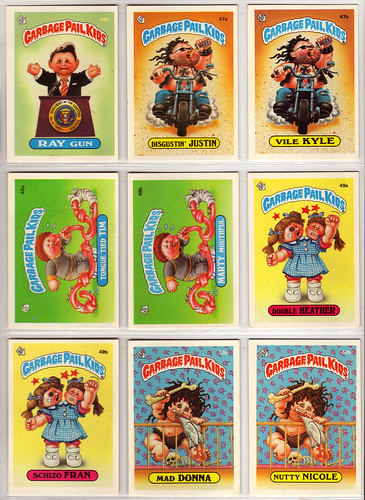 When I started reassembling my collection about a decade ago I knew that I’d be able to find the 2nd series cards on eBay, but the general asking price was always a little too high to justify.  I’d always keep an eye out though and after nine years I finally managed to snag a set of 2nd series GPKs for a more than reasonable amount., so I think it’s high time to share them for this 100th Peel Here column! 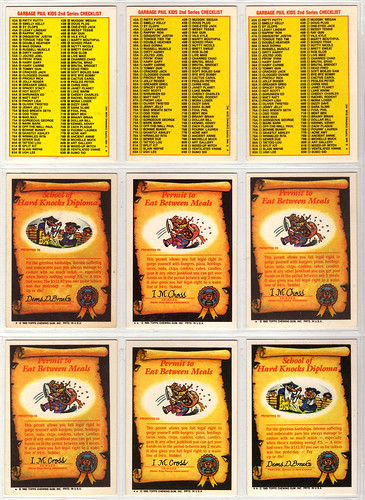 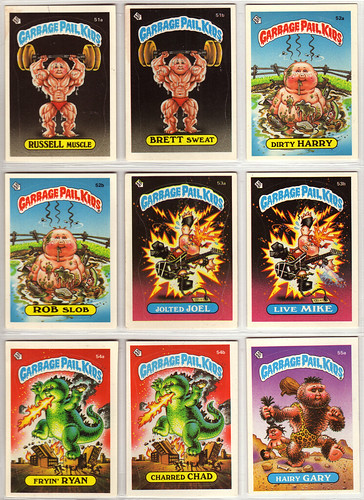 John Pound was responsible for all of the paintings in this set, and in my opinion these are some of his best GPK pieces overall both conceptually and in execution.  To me this is what truly defines the look and feel of the classic Garbage Pail Kids stickers, highlighting their fun use of parody and iconic characters.   Later, especially from the sixth series on the concepts started getting darker and dabbled more in the land of envelope-pushing mean parody, which has never sat well with me. 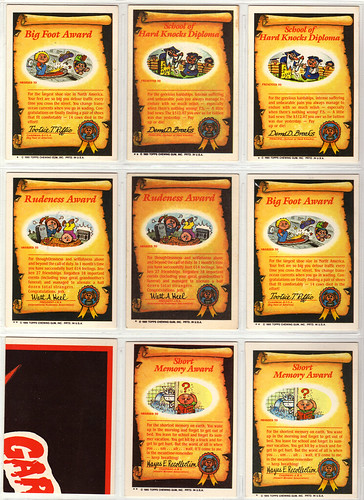 Some of the stand out cards in this set include 45a&b (Messy Tessie and Leaky Lindsay) and 62a&b (Greaser Greg and Chris Hiss) who both went on to appear in the Garbage Pail Kids movie a couple years later.  Some other cards I always really dug are 44a&b (Sy Clops and One-Eyed Jack), 49a&b (Double Heather, Schizo Fran, and eventually Fran Fran who replaced the slightly non-PC Schizo Fran in later printings), 53a&b (Jolted Joel and Live Mike), 77a&b (Acne Amy and Ghastly Ashley), and 81a&b (Split Kit and Mixed-Up Mitch.) 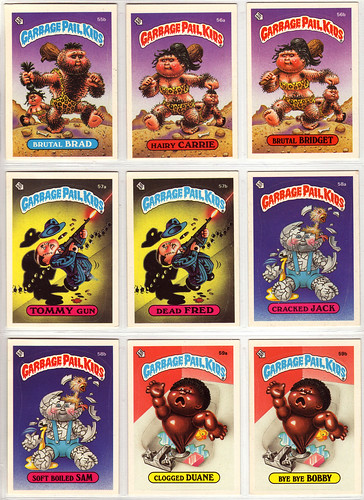 The stickers that always sort of represented this set for me were 79a&b, Sewer Sue and Michelle Muck, as these were some of the first 2nd series cards I ever came into contact with. 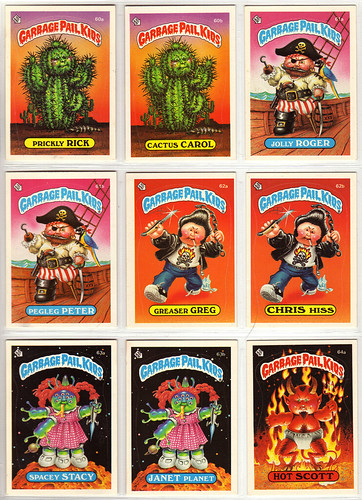 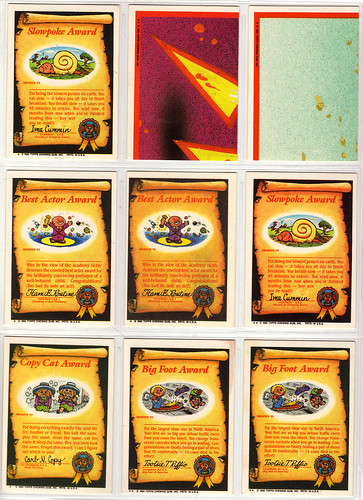 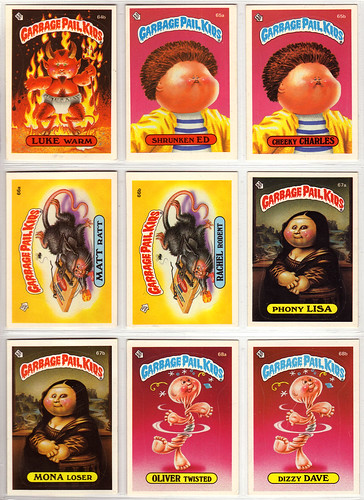 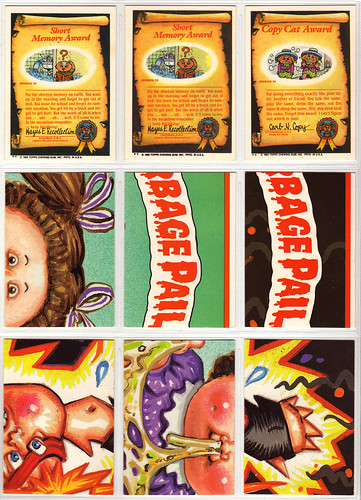 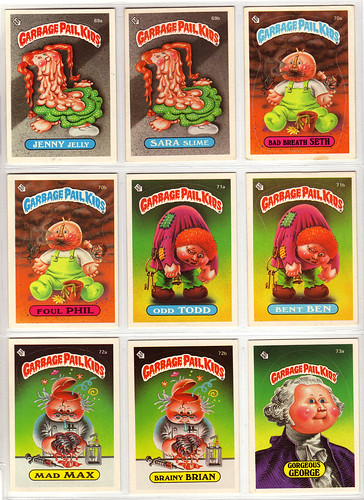 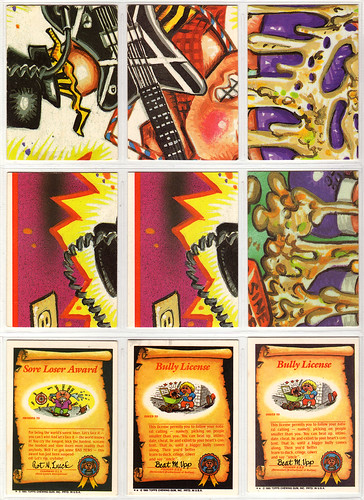 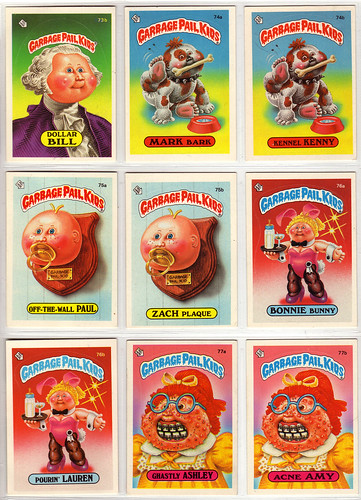 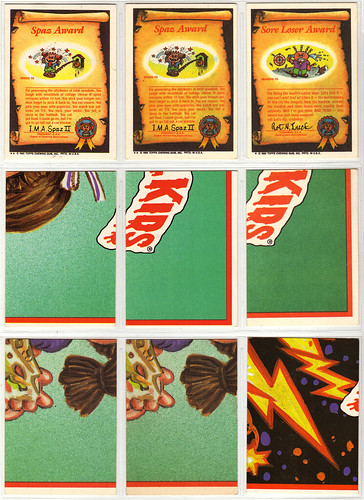 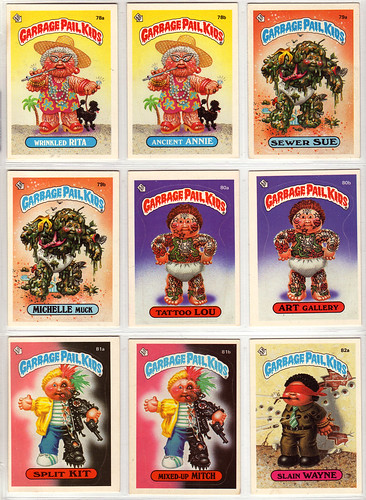 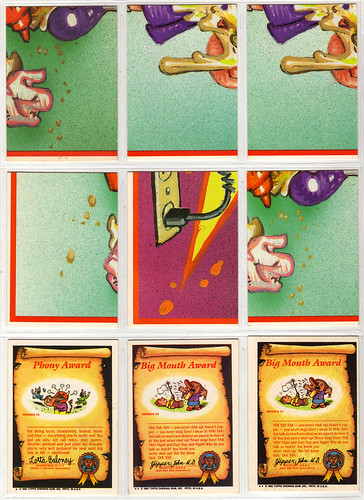 Anyway, I never thought it would take me three years and four months to get through 100 Peel Here columns, but here we are.   Though I thought I’d run out of stickers to share by this point, I still have some fun things to share, so who knows, maybe I’ll still be talking about stickers three years from now…

Why didn’t they just name the leader Fluoride?