I wish I could still get a subscription to Hot Dog!

Looking back, I spent an inordinate amount of time reading as a kid, though I never really had a window into kid-centric magazines. I was always more of an “inside” kind of kid, and I always seemed to have a lot of books around, mostly hand-me-down read-alongs and Judy Blume books from my sister. Unfortunately this really didn’t translate into magazine reading for the most part. Instead I’d spent my allowance on the odd Spider-Ham comic, though eventually I did start picking up issues of the G.I. Joe and Nintendo Power magazines when they debuted. So I completely missed out on issues of Muppet, Thundercats, Stickers ‘n Stuff, and Highlights (though I did devour these on any and all doctor visits), and more importantly the Scholastic family of magazines including Peanut Butter, Wow, Hot Dog!, Dynamite, and Bananas… 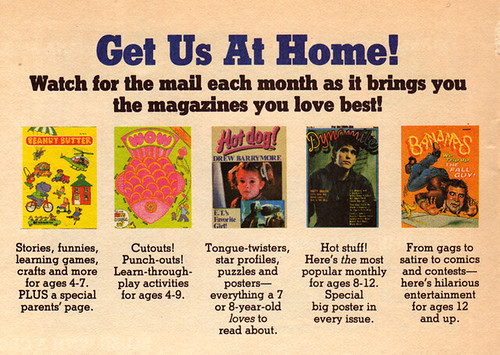 From what I can gather, these magazines were mostly available as subscriptions through the various Scholastic Book Club flyers that were passed around during elementary and middle school. These magazines were more in the vein of Highlights and the various cartoon branded mags (like G.I. Joe, Go Bots, and Thundercats), than say an issue of Muppet (which was more like most standard magazines on the market), with almost no advertisements and a relatively small page count. I recently picked up a stack of back issues of Hot Dog! That I thought would be fun to share. 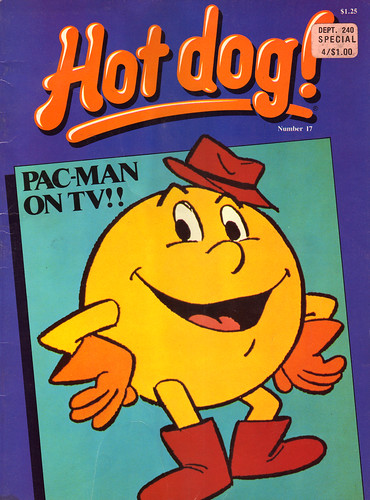 Today we have issue # 17, from February, 1983 (gathered from the context clues on the inside front and back covers), which features a cover story on the Pac-Man animated series, as well as articles on action figure collecting and penguins and a bevy of regular features including jokes, puzzles, activities and a story… 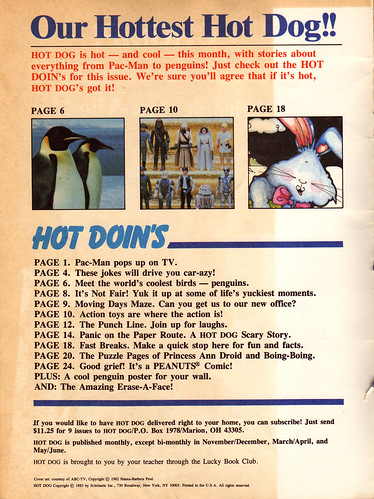 Hot Dog! really seems like that first stepping stone towards becoming a pop culture enthusiast. Aimed at early readers in the 2nd to 4th grade range, the magazine typically featured a cover story dedicated to pure escapism covering movies, cartoons, toys, or child stars. Though the rest of the issue was geared more towards learning activities, reading skills and more informational articles, I have to assume it was this main story that really hooked kids, getting them to convince their parents to order the magazine. Hot Dog was the brainchild of Jane Stine and her husband the “jovial” R. L. Stine (who most probably know for his later prolific work behind the Goosebunps and Fear Street children’s books.)

In this issues the main hook was the Hanna Barbera Pac-Man cartoon, with an article mostly dedicated to an informal interview with Pac-Man voice actor Marty Ingels (husband to Partridge Family mother Shirley Jones, and step father to her son Shaun Cassidy.) There are some interesting tidbits in the article by Megan Stine, including mention of the pre-cartoon-syndication issues with advertising toys and games during a branded animated series and how this affected the look and fell of the cartoon itself (dropping the use of the Pac-Man arcade game sound effects as it might be misconstrued as in-show advertising.) I think this is fascinating considering the entire landscape of children’s television was about to be changed by the debut of the He-Man and G.I. Joe cartoons. 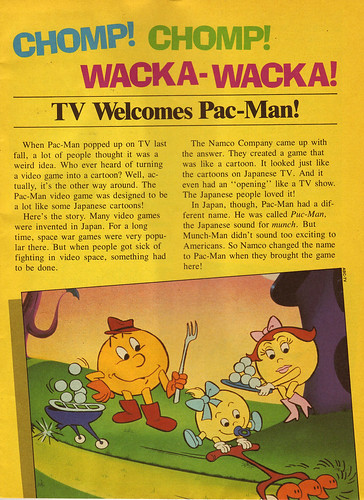 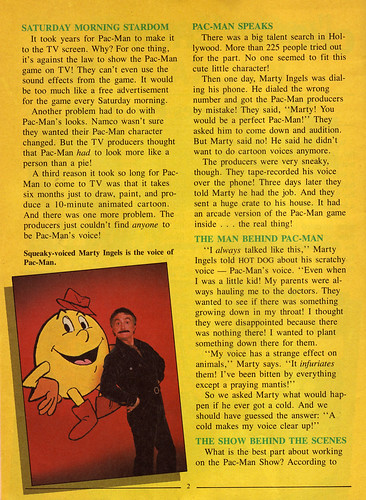 It’s also kind of neat to get a bit of insight into how Ingels landed the role of the big yellow chomper, even if the idea that the casting directors didn’t give him an option sounds a little far fetched. At the same time, reading up on Ingels and his insanely litigious hobby, I can totally see him lucking into an audition by chance and refusing to accept the role. It fits with his character at least. 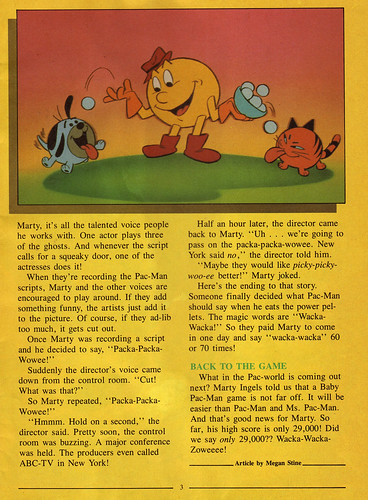 Each issue of Hot Dog! also featured a page dedicated to reader-submitted jokes based around unfairness in the column called simply enough It’s Not Fair! Kids were charged with coming up with a punch-line to the titular setup, the best of which would be selected to appear in the next month’s issue with an accompanying illustration by the awesome B.K. “Bob” Taylor (who illustrated the Awesome All*Stars sticker cards I’ve talked about in the past.) Taylor has a great style mixing the parody of caricature and fine detail work that makes for great children’s illustration (in the footsteps of MAD magazine.) 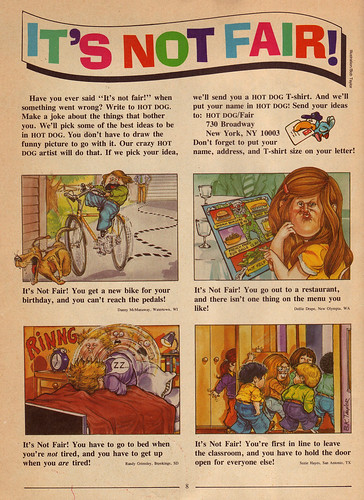 This issue also features a short article on action figure collecting by Eve Ronan. Though the write-up ignores most of the landscape of boys action figures throughout the 70s (including omitting the wildly popular Shogun Warriors and Six Million Dollar Man figures), it does provide a bit of insight into the coming collecting frenzy that would overtake so many young boys throughout the 80s. I think she hits the nail on the head when she talks about action figures as collectors items instead of playthings, though I think Masters of the Universe figures were more about play than a lot of its contemporaries. 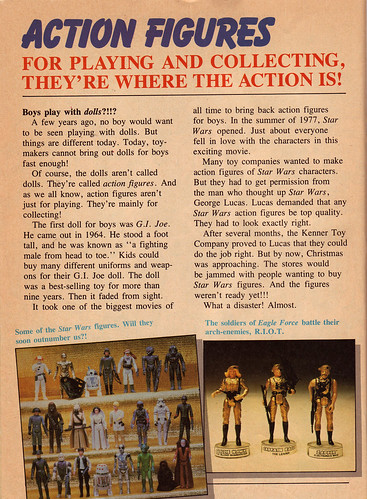 Again, it’s also interesting to note that as far as Ms. Ronan was concerned, He-Man and G.I. Joe weren’t media tie-ins, though little did she know that cartoons were in the works almost from day one with both action figure sets. Also, I had never heard of the glistening commandos in the Eagle Force toyline from Mego, so it was kind of cool to get a chance to see these. Anyone out there have these as a kid? 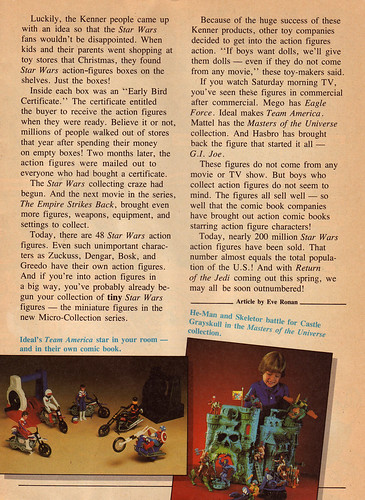 All in all I kind of wish I had subscribed to Hot Dog!, but I guess I was more preoccupied with selecting the most recent Garfield collection or Choose Your Own Adventure title to check the box next to this magazine in the book club flyer. 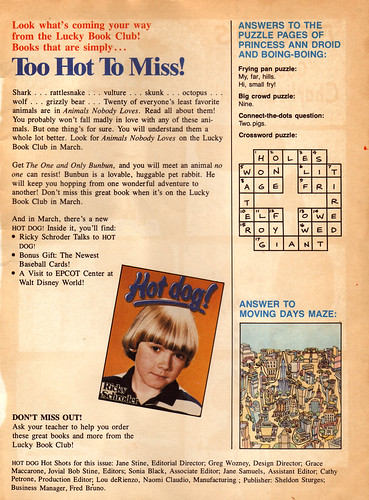 Cartoon Commentary! #9, Where does Eric get all those wonderful toys?