Peel Here #98: These stickers will break you…

When I think about growing up as an American in the 80s, three things come to mind, seeing Lee Iacocca’s “autobiography” on at least a dozen of my friend’s and family’s coffee tables, listening to Bruce Springsteen’s Born in the U.S.A. in the car with my dad, and watching Rocky IV for the first time on cable.  The movies Top Gun and Gung Ho are also up there, but those first three really bring America and the 80s to mind.  Of the three, only Rocky IV snagged its own set of Topps trading cards and more importantly, stickers (though I’d be willing to bet good money that there were some sort of Born in the U.S.A. stickers floating around, even if they were bootlegs.) 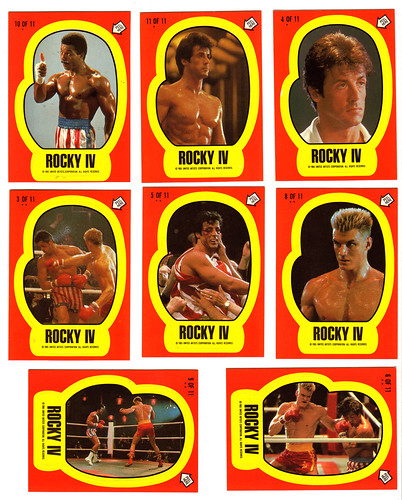 Now aside from the 80s era “America is #1” sentiment that I get from the flick, one of the other main things that I take away from Rocky IV is just how Over the Top (pun completely intended) Sylvester Stallone films are.  Besides single-handedly fighting and winning the cold war by knocking out Dolph Lundgren’s Ivan Drago, Sly Stallone has been the penultimate ennui-filled cop (Cobra), he was responsible for re-starting and re-ending the Vietnam war in Rambo First Blood, Part II, he made mountain climbing into riveting action in Cliffhanger, he almost made Estelle Getty an action star, and reprising his role as Rambo in 2008 he showed the world that it was indeed cool to blow people up again on film, even if he did look like a haggard, old, body-building woman when he did it. 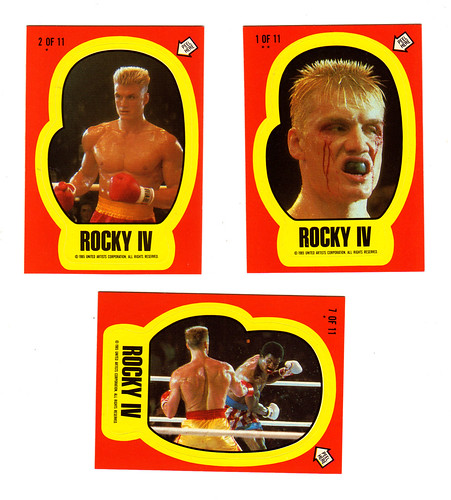 Personally, my favorite aspect of the film is Dolph Lundgren, who many people might not realize is probably the smartest man in the action film genre to date.  The guy holds a master’s degree in chemical engineering and he’s a Fulbright scholar for crying out loud.  His brain could beat up my brain with its cerebral cortex tied behind its back while he beat my body to a bloody pulp with his third degree cloth black belt.  Literally with his actual cloth black belt.  Seriously though I loved the strength he exuded as Ivan Drago (the dude is made out of steel) and eventually he would go on to embody a couple of childhood super heroes, He-Man and the Punisher, in films that weren’t well received but were still awesome.

As far as this sticker set goes, like it’s predecessor, the Topps sticker set for Rocky II, it makes awesome use of the typical Topps bold outline on the die-cut stickers by making them into the shape of boxing gloves.  I think these are the only Topps sticker sets that thought that design aspect through to that level (well, actually the A-Team sticker borders were in the shape of file folders and I guess the Alien stickers had an egg border on some of the cards…) 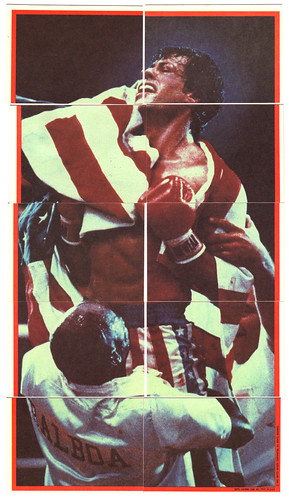 I kind of wish we’d gotten a scruffy, bearded, climbing-a-mountain-to-train-for-the-big-fight Rocky, not to mention at least one Brigitte Nielson sticker, but I’m happy that at least seven of them featured Drago.  I wonder why there weren’t any Rocky III cards and stickers?  Was Mr. T as Clubber Lang just too much awesome to be contained in a boxing glove-shaped sticker?

Saturday Supercast 24 – The Year Without a Santa Claus!