For this week’s Awesomely Overdue Books column I thought I’d continue on with some more Find Your Fate books from my collection, in particular some of the more girl-centric volumes.  First up are three volumes of the Jem FYF series, titled Jewels in the Dark (written by Rusty Hallock), The Video Caper (written by Jean Waricha) and The Secret of Rainbow Island (written by Judith Bauer Stamper) respectively.  There were three published Jem Find Your Fate books, though there are an additional three rumored unpublished volumes. 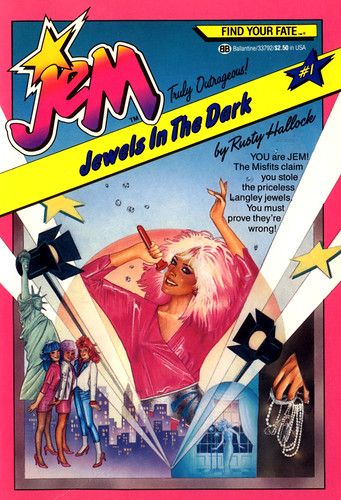 Though not quite as action packed as other shows animated by Sunbow back in the 80s (like G.I. Joe, the Transformers, and the Visionaries), Jem was still exciting, filled with intrigue and had its fair share of science-fiction elements, so much so that I never felt weird watching it after school.   In fact it shared a lot of the aspects that made She-Ra feel more like a cross demographic show, and not just another girl’s cartoon.  When I first cracked the cover on the Video Caper I was curious if these books would have the same bad choice pitfalls that he Transformers books featured. I was curious if you could end up getting Jem or one of the Holograms (her fashionable band-mates) killed by choosing too hastily.  I couldn’t help myself and I broke one of the cardinal rules of CYOA-style books, I flipped forward to find some of the ending pages, and sure enough, there is a death scene.  I still find this really disconcerting considering these are branded properties and kids can get really invested in the characters, even if they could make different choices next time and have Jem save the day. 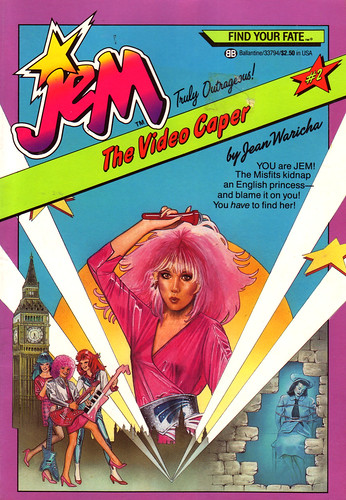 Anyway, another concern I had when cracking open these books are just how well the authors handled the material.   Were they “written down” to a kid’s level?  Were they just sort of knocked-out considering the format, or did they try and put a little more effort into them?  With the Video Caper I can honestly say that Ms. Waricha dropped the ball a bit.  One of the first lines in the book is so hackneyed it’s laughable, “Before you leave , you can’t help but notice yourself in the mirror and think how truly outrageous you look…”  ‘Cause you know that Jem is truly outrageous right?  Truly, truly, truly outrageous.

Along these lines, the choices, or more accurately the paths that you take after making choices, are poorly handled as well.  The initial choice forked in two directions, and if you pick path A, lit leads to path B anyway without advancing the story or adding anything.  It’s almost as if there really is no choice.  Also there are only a handful of choices to make with each ensuing path, with most of the pages instructing to turn to a specific page with no decision-making needed.  Actually, in the Secrets of Rainbow Island there are only four choices in the entire book.  Heck the plot even gets left behind in a number of the paths.  In the Video Caper the build up to the story involves a couple of speed-bumps that are completely left out of the second half of the story including the fact that Jem and her alter ego Jerrica are expected to tour London together with Jerrica’s more-or-less boyfriend Rio (and unless Synergy projects a hologram version of one or the other, this ain’t happening.)  Also a princess is abducted in the first half of the story and in the second half this plot point is forgotten in some of the paths. 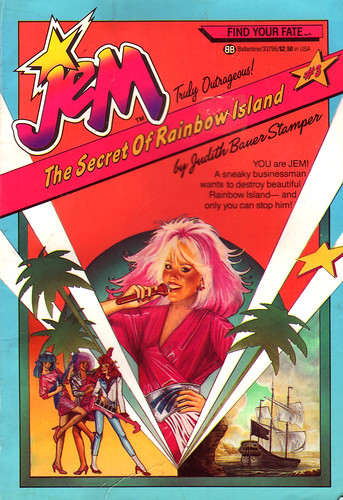 I was also surprised to see that the books were written in the second person, so the reader is not only a character in the story, but takes on the role of Jem. The Transformers books, a couple of which were also written by Judith Bauer Stamper, were in a more comfortable 3rd person narrative where the reader was urged to make choices for the Autobot and human characters.  So not only can a path end with Jem’s death, in essence the reader dies along with her.  Again, for kids I would think this could be heady stuff.  All in all I’d have to say that these Jem Find Your Fate books are pretty much at the bottom of the CYOA-style book barrel.  Not only are they painful to read, they’re also not illustrated, so there isn’t even fun stuff to look at.  These were a total cash grab by Ballantine who must have done the math and figured anything with the Jem logo would turn a profit regardless of who badly written they were.  It’s a shame too because the cartoon was pretty good and I’d hate to think there were any girls turned off to the series because of the books.

The other book I wanted to mention is titled Morgan Swift and the Kidnapped Goddess (written by Sara Hughes in 1986.)  From what I can gather the main character Swift, was created by Random House/Ballentine as an answer to Indiana Jones for girls.   Swift is a high school science teacher with a keen fashion sense and a penchant for exploring jungles and pyramids in her off time.  There are two Swift Find Your Fate books (including M.S. and the Treasure of Crocodile Key), as well as a few prose books also published by Ballantine/Random House in 1985-6.  The two Swift FYF books are actually part of a larger series of Find Your Fate books that also includes a series of Indiana Jones and James Bond (all based on A View to a Kill) books.  I suppose this was considered their action/adventure line of Find Your Fate books, though all of the books really fall into that category. 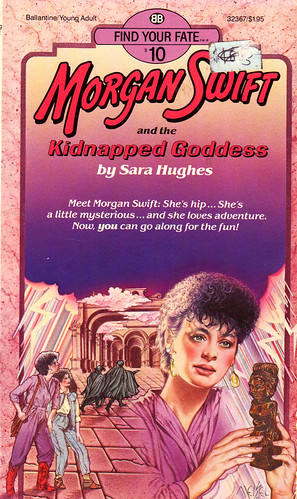 This volume is also written in the second person, which is a format very common to CYOA-style writing and one that grates on my nerves.  Probably the lest used in the history of fiction, the second person narrative is by design an affront to the reader’s sensibilities, forcing them to agree with statements of character and desire.  For instance, in the Morgan Swift book there’s a passage that reads:

“She’s your science teacher, only the coolest thing to grace the halls of Coolidge High.  She’s wearing a dark purple jumpsuit and her red leather cowboy boots.  She never looks like anybody else, and she always looks great.”

Now I can get onboard with the idea of the author using the second person perspective to force one idea on the reader, say that we think Ms. Swift is the coolest thing on two feet.  But to further suggest that the eye-piercing matchup of a dark red jumpsuit and red leather boots looks great is just too much for me.  At that moment I’m ripped from the story and all good faith from the author’s words are gone.  My suspension of disbelief is shattered, and yes I realize that this is just a kid’s book, but it shouldn’t matter.  I never feel this way reading Judy Blume or James Howe, both of which hold up to adult scrutiny.   Again, the second person is just a very difficult perspective to sell to the reader.  You have to REALLY be able to target the intended audience, and people, as much as we might believe can be completely predictable, are usually too varied to target in such a manner.

Similarly there’s an issue with prior knowledge that is in my opinion impossible to pull off without some sort of amazing familiarity to back it up.  Another line in the book reads, “It’s on the tip of your tongue to ask, ‘Is that when you were in the monastery?'”  Before this reference we literally know nothing about Ms. Swift except that she’s qualified to teach high school science, has horrible fashion sense and has spent at least a day in Southeast Asia.   So the author is forcing the reader to have instant background knowledge of Swift, and it’s very jarring.  This is where second person leads and it’s a very perilous and annoying road.  At least after this reveal the reader is informed of a slew of other rumors about Ms. Swift (she used to date Sting!), so later on this sort of trick will work better as we actually have prior knowledge.  Anyway, even though the book is written in the second person, this time you play the sidekick, a student, Shortround to Morgan Swift’s Indiana Jones.

When it comes to decision making time this raises another unfortunate issue as Swift is the main protagonist and it’s laughable that when the chips are down she’ll rely on you to lead the way.  The first choice is presented after it’s revealed that your town has a traveling art exhibit from Meronga.  After bumping into Ms. Swift at the museum she explains a little bit about a priceless wooden statue, when all of a sudden three masked men burst in and steal the artifact.  Without thinking or hesitation you follow Swift outside to her car and speed after the thieves when you’re presented with a choice of two paths.  Honestly at this point Swift is in control so why is the reader prompted to decide? 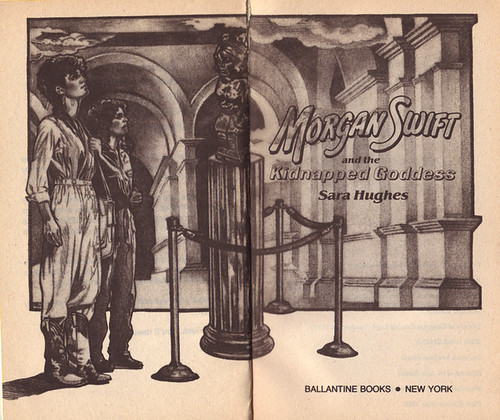 Anyway, even for these pitfalls the book reads much better than the Jem volumes.  The Swift character is strange, a mix between Indiana Jones, MacGyver and a witch.  The book does have some great illustrations by Ann Meisel as well.

In future installments of Awesomely Overdue Books I’ll get to at least one other “mostly for girls” series, a handful of Dungeons & Dragons branded romance CYOA-style books. 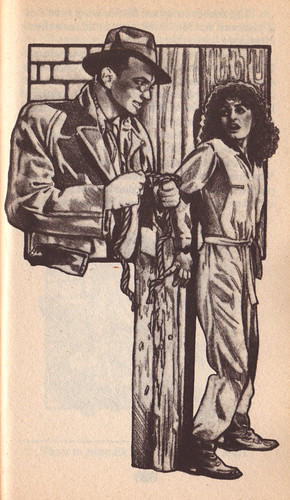 And the winner is….

Getting Bonier on Day 22 of the GPK Halloween Countdown!