What would Optimus Prime do? You Decide!

Recently a couple of blogs that I frequent celebrated their four-year anniversaries (Old Man Musings and Cavalcade of Awesome), and it got me thinking about Branded’s upcoming 4-year (which hits this coming Wednesday the 17th), but not necessarily about any jubilation. Though I’m glad to have stuck it out this long and I’ve met all sorts of great people since starting this site, what I really started thinking about was the fact that I have all kinds of stuff that I’ve accumulated over the years, specifically to write about, which has been pushed to the side. On a side note, my wife and I have been watching an inordinate amount of episodes of Clean House recently and though we’re no where near as clutter intensive than any of those families, we’ve been asking ourselves what we would do in their situation (where they’re encouraged to donate or sell the majority of their stuff for the good of an organized clean house.) The wife had even commented on my ever growing collection of Choose Your Own Adventure style books the other day, wondering when I was ever going to get around to reading them and I mentally put myself in the Clean House mode and tried to imagine getting rid of them.

All I could think of was Hell No. But I have to admit that they’ve been sitting for over two years unread (in fact, here’s where I first mentioned getting bitten by the CYOA collecting bug almost exactly two years ago), and I began to wonder when I’d have the time to tackle them. Well, now is as good a time as any I guess. I decided to start with my run of Transformers Find Your Fate books. 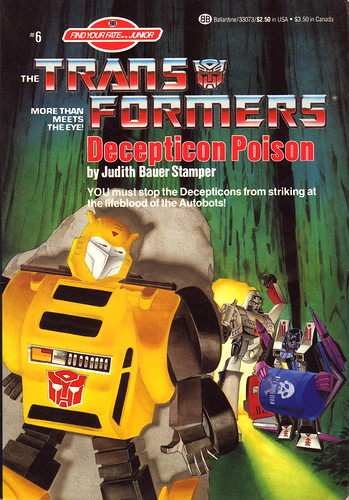 The Find Your Fate books published by Ballantine were potentially the biggest single competitor of Bantam’s Choose Your Own Adventure series bringing all sorts of brand-name properties to this style of children’s book entertainment. With such branded luminaries as Indiana Jones, James Bond, Dr. Who, G.I. Joe, Jem, Tales From the Crypt, Thundercats, the Three Investigators, Golden Girl and Transformers, Ballantine was betting on character familiarity to win out over the originality and popularity of the CYOA series. Ultimately Ballentine published sixty seven books under the FYF heading and they ended the series in 1987 (trying unsuccessfully to revive the franchise in 1995 with a single volume of Find Your Unfortunate Fate Tales From the Crypt), bowing out to the CYOA empire (which ran until 1998 initially and had over two hundred entries published.) Though these two publishing houses clashed throughout the 80s on the CYOA-style adventure book front, the ultimate irony is that both companies are now divisions of Random House.

Anyway, as far as the Find Your Fate series is considered, for a nostalgia buff like me, these books are all gems because of their branded nature. Though I didn’t have any Find Your Fate books while growing up, I can imagine how awesome it must have been to more or less get a chance to control the actions of some of your favorite cartoon and movie characters while reading about their adventures. To me it seems like one step closer in getting into that character’s head than just playing with a toy, and much more involving than any of the branded Atari games of the period (for all of their generic boring adventures, e.g. E.T.) So what were the Transformers books like? First off they were part of the Junior subset of FYF books, so they only clock in at around 75 pages, and they’re slightly larger in format, sort of like a pre-chapter book. 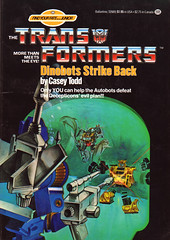 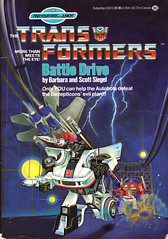 There were nine books in the series, the first six of which were released between December 1985 and April 1986 and were concerned (more or less) with pre-Transformers the Movie events in the timeline, while the last three books were published in September 1986, a month after the movie hit theaters and they involved the post movie characters. Here’s the list:

#1, The Dinobots Strike Back (written by Casey Todd)

#3, Attack of the Insecticons (written by Lynn Beach) 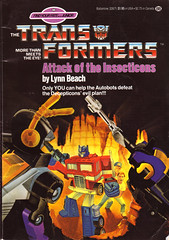 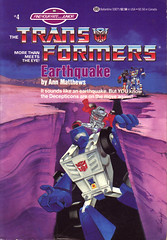 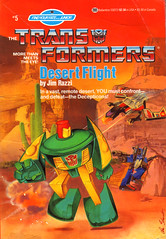 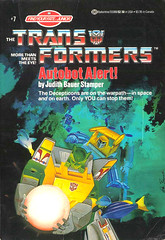 William Schmidt handled the artwork on all nine of the books, and was responsible for executing one of the more interesting aspects of this series of books, namely the choice to use the toy designs for the characters rather than the cartoon incarnations. This was sort of a running theme with a lot of the Transformers merchandising, in particular the early Marvel comics and a bunch of stickers and lunchboxes (which heavily used repurposed toy-packaging art.) Though a lot of toys resembled their cartoon counterparts pretty closely, there are some glaring exceptions like Ironhide and Bummblebee who look quite different, and in Ironhide’s case not at all like a robot. Also fans of the toys will surely mock Megatron’s, um, manly stature as the design of the action figure ended up with an unfortunate placement of his gun-mode’s trigger. So to see these weird designs pop up in the artwork of the books can be kind of comical at times. Also, it’s kind of weird to see Schmidt re-draw some of the characters from their exact pose on the toy packaging artwork, again something that longtime fans will notice immediately. My favorite contribution by Schmidt though involves his use of reference material for some of the background elements in the ninth book, The Invisibility Factor… 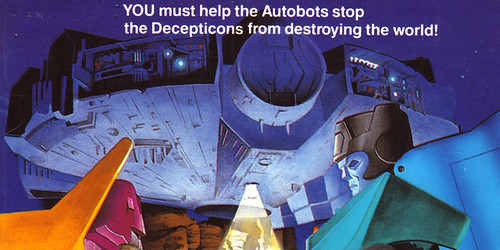 The design of a scientist’s spaceship is a direct rip of the Millennium Falcon and later on in the story the Autobots are flying through an asteroid field in a ship that is unmistakably one of the Imperial Shuttles from Return of the Jedi. I sure hope those Autobots have the proper code clearance to get by the Star Destroyers and to continue on to Endor… 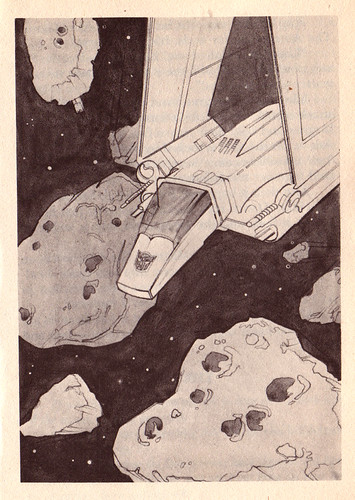 Schmidt also worked on a series of Star Wars novels in the 80s, the Lando Calrissien books, so my guess is that he had some SW reference material lying around and decided, “Why not?”

Along with the choice to use the character designs from the toys as opposed to the cartoon, the writers were also given notes that appear to have come from the Marvel comics instead of the Sunbow show. The most obvious example of this is the inclusion of the human character Buster Witwicky in place of the more common character Spike from the cartoon. In both the comics and the cartoons (and the new movies as well, though Shia Labeof is playing a variation named Sam) the Autobots are aided by the Witwicky family, namely Spike (in the cartoons), Buster (in the comics), and their father Sparkplug (comics and cartoons.) Whereas Buster was initially the same character as Spike for the comic book continuity, he was eventually retroactively turned into Spike Brother when Spike was introduced into the comic series as the Headmaster counterpart to Fortress Maximus (as he was also on the toy.) Anyway, the books feature Buster, which leads me to believe that the authors were probably given a series bible that related to the comics, as well as character designs from the actual toys. My guess is that this was a little bit confusing to kids who didn’t read the comics and were just fans of the cartoon. 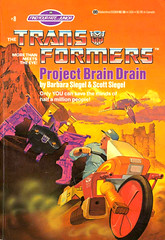 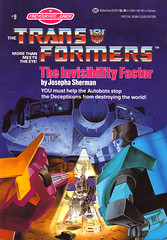 Similarly some of the Tranformers characters are miscast in the last three books of the Find Your Fate series, in particular Hot Rod who hadn’t turned into Rodimus Prime even though the books feature Galvatron, so the stories are definitely post-movie in continuity. Maybe the writers were working from a bible that didn’t reveal the ending of the movie? Also there are a handful of characters that pop up in these last three books which were killed off in the movie, namely Prowl.

All in all, as CYOA-style books go, these Transformers Find Your Fate Junior books are sort of on the annoying side in that they read as if there is only one true path through the story. Though I’m not steeped in the CYOA community (if there even is one, and I’m sure there is), my guess would be that there is a fundamental rift between fans as to how the books read in terms of decision-making. The are two camps as I see it, one in which the decision trees give the impression that there is a right and wrong choice, and by continuing to make the “right” decision leads to the some sort of prize (be it a longer more satisfying read or the “best” ending), and a second in which the decision-making is less about winning the adventure and more about crafting the story as you go.

As a kid I fell into the former camp, but as an adult reader I’m way more interested in the latter concept, that this style of writing is to make the adventures more involving by giving the reader a chance to participate. This also strengthens the idea that you could read these books numerous times choosing differently each time to get a completely different, yet satisfying experience. The thing is that not all CYOA-style books are written so that you can feel satisfied in making whatever choice you desire, in particular these Transformers volumes. In a lot of cases the choices are clearly right and wrong, and by choosing the “wrong” option you’re directed to a bitter end for the characters involved. This in essence punishes the reader for making a hasty, in most cases violent or greedy, choice and promotes the idea that there is only one correct path through the story and the trick is to find it. In most of these Transformers books there is one point that a choice leads to a character’s grisly death. I actually find this kind of disturbing as it really puts this outcome in the reader’s hands, and for some kids this must have been heart wrenching. Heck watching Optimus die in the ’86 movie was bad enough without me having to feel responsible on top! Little Bobby is so excited about the prospect of defeating Galvatron one and for all that he decides to have Hot Rod and Kup take an invisibility device away from it’s designer, only to have Hot Rod disintegrated by a booby trapped self-destruct option on the device.

On the other hand, maybe this is the sort of tactic that really hammers home moral responsibility, much more so than the famous PSAs at the end of so many of 80s cartoons. Taking the horror movie route and illustrating that bad behavior results in death. 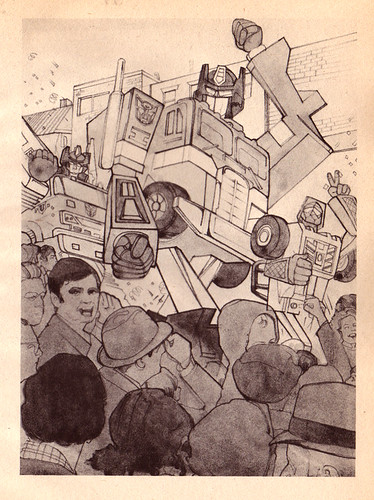 I do have to say that the stories end up mirroring the three act structure of the cartoon episodes pretty well, and the overall concepts are relatively fun. The various writers do a pretty good job of sticking to the overall character traits as well, so these are a fun way to expand on the universe of the cartoons and comics if you’re a fan of the Transformers. Oh and for all you kids out there, if we are going to treat these books as if they’re a game to win, don’t cheat by writing in the book… 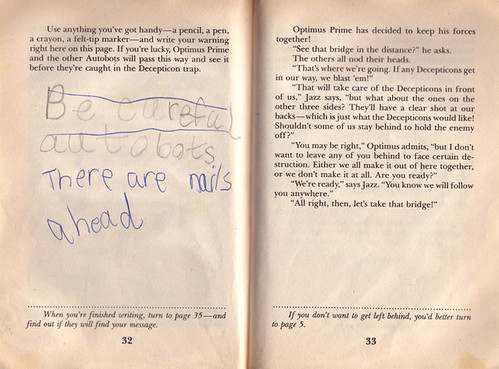