Getting some more 80s cartoons on DVD…

So aside from some odds and ends here and there, new releases of out of print 80s cartoons on DVD have really been slowing down lately (though we did finally get Scooby Doo’s All Star Laff-a-Lympics on DVD.)  I think a big part of this is a mixture of the switch from DVD to Blu-Ray and the general decline in DVD sales.  Just like with VHS when DVDs became cheap there was a too-quick boom where people bought tons of them and then a year or two later were scratching their heads trying to remember why they accumulated a collection of 300 plus movies and television shows.  DVD collecting is one of my main hobbies, in particular building specific libraries (e.g. 60s, 70s, & 80s cartoons and all of the flicks from the 80s that I loved as a kid), so even though I have what seems like six million DVDs I’m not phased in the least. Back to the 80s cartoons though, it’s kind of a shame since there are still a handful of shows that I think really deserve to be available on DVD (like Kidd Video, the Dinosaucers, the Visionaries, Teen Wolf, TigerSharks, and Jem just to name a few.)

There are a couple of promising movements in the realm of DVD releasing though, namely print-on-demand technology and anthology sets.  Amazon has been playing around with a p.o.d. model by partnering with MTV/Nickelodeon on a series of 90s releases like Doug, the Rugrats, the Maxx, the Head, and Rocko’s Modern Life.  I’m not sure how well these titles are selling, but I can say that I’ve been more than happy with the quality of both the Maxx and Rocko DVDs, and I’d love to see some future releases of Ahh! Real Monsters, Pete & Pete season 3, Hey Dude, Salute Your Shorts, and maybe some 80s titles as well like You Can’t Do That on Television or a best-of Pinwheel.  Similarly, Warner Bros has also been playing around with p.o.d. with their Warner Archives releases, but so far I’ve found the selection to be wanting and the prices are way too high (but you can finally get Lilly Tomlin’s Incredible Shrinking Woman and the Rankin/Bass Life and Adventures of Santa Claus, which is awesome.)  The one company that’s really got me excited though is Shout! Factory which has decided to start their own p.o.d. service that’s specializing in continuing releases of shows that have received initial sets that didn’t sell well and have since stalled like C.O.P.S. and Mr. Belvedere.  I’m crossing my fingers that there is a volume 2 release of Jayce and the Wheeled Warriors in the cards…

I’m not quite as interested in the anthology releases that have been coming out, mainly from Warner Brothers, but there is one that has peaked my interest called Saturday Morning Cartoons: 1980s, Vol. 1… 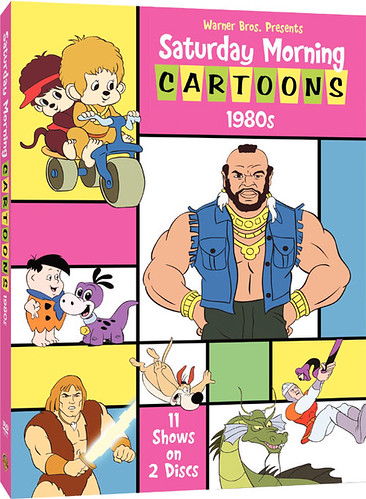 Warner has previously released two volumes each of 1960s and 1970s sets that are interesting, but unfortunately they were a little off-the-mark in my opinion because they contained episodes of shows already available on DVD.  If there’s one practice I hate with DVDs it’s double dipping, and these are the worst because in order to get episodes of shows like the Herculoids or Shazzan you have to also buy episodes of the Flintstones and Hong Kong Phooey.  Nothing against those two latter shows, but they’re already available on DVD and if you happen to own them than these episodes are just taking up valuable real estate on the anthology releases. I think Warner has finally gotten the message though, and with the 1st 1980s release they concentrating on putting out a collection of shows that have never been on DVD before.  The set consists of single episodes of the following eleven shows:

Galtar and the Golden Lance 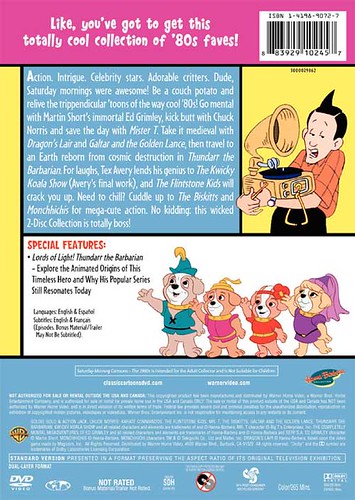 Though I’d love full season sets of Thundarr and Mr. T, I’m glad at least that these shows are going to see the light of day on DVD.  When I first started collecting cartoons on DVD my mission was to get 1 episode of every show I watched as a kid on DVD, and this set will fill in a good chunk of those gaps.  I can only hope that they continue this trend with at least a second volume.  I’m not sure what shows Warner holds the rights to (even though I realize they own a good chunk of Ruby Spears and Hanna Barbera), but I’d love to see some episodes of Turbo Teen, Pac-Man, Teen Force, Astro and the Space Mutts, Fangface, Captain Caveman, the Frankenstones, The Shirttales, Rubik the Amazing Cube, the Snorks and Kidd Video.

Oh and while I’m on the subject of 80s cartoon releasing, I have to say that there is another “innovation” that’s begun to take a foothold lately that I’m not a big fan of, iTunes only digital downloads.  Whereas I’m all for the idea of more streaming and downloadable content, I hate it when releases are subject to only one medium.  It was recently announced that both the Dinosaucers and the Karate Kid cartoons are going to be available on iTunes.   I’d love to have the Dinosaucers on DVD, but maybe I’ll have to settle for watching them on the computer (or eventually on an iPad maybe?)

These Should Exist: The Robo Force Edition!

You know, you’re an idiot. You’re going to die tonight…