We’re really getting down to the wire here, and imho these monsters are getting pretty messed up, especially for having aired on Network television in the mid 80s.  My 31 Days of Monsters Halloween countdown only has three more ghoulish creeps to unveil!  For those joining the party late, in honor of the 25th anniversary of the Ghostbusters franchise, not to mention my love of 80s animation, I’m counting down 31 of my favorite monsters from the Real Ghostbusters cartoon.  These animation cels are culled from my personal collection, and my wife and I tried our best to put them in a not-so-scary to really-freaking-creepy kind of order with the creepiest falling on All Hallows Eve.

Today we have one of the creepiest bar none.  This probably would have been my pick for the last monster, but my wife is really a better judge of what’s creep-tasitc.  Ever since I saw my first Friday the 13th jump-scare back in the mid 80s I’ve just never been all that afraid of all things horror and monster related.  I also started reading Stephen King and Clive Barker at a pretty young age, so I think I was tempered on the scary.  That doesn’t mean I don’t appreciate the genre, in fact I love it to death, but I’m very rarely scared or really creeped out (giant spiders, anthropomorphized food products, and multi-armed ghoulies do a pretty good job…) 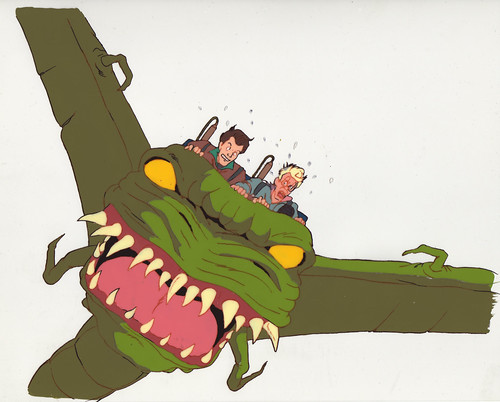 I’m finding that a lot of sharp teeth, especially ones at weird angles are also one of my soft spots.   I think, like most people, I don’t like the idea of being bitten, but being torn to shreds while being bitten seems so much worse.  This guy looks like a giant shark with wings and a really flat snout, and I’ll bet it would be pretty ugly of you stuck your hand in that gaping maw of his.  Sort of like that scene in Jaws 4 at the beginning when the family’s youngest had his arm bitten off and he held up the tattered yellow rain slicker all wet with blood and gore.   I love that I also got a chance to slip in a bit of Peter and Egon before this list came to an end, especially when they’re clearly frightened out of their gourds.

This monster is actually a converted set of roller-coaster cars.  It was the handy work of the Boogeyman, one of the Ghostbusters most famous villains.  He hails from episode #81, "The Boggeyman is Back".

As for the cel itself, I was a little bummed that the black line-work on the photocopy portion of the cel has faded so much over time.  Again, not to harp on the quality issues as it worked at the time and for the the purpose it was made for, but as a collector these overseas produced cels just don’t last.  In part I’m glad I have a site like Branded to preserve what is left of some of these cels so that I can at least get a digital copy that’ll serve as a record frozen in time for anyone who might be interested in cel animation for years to come.

If you’re enjoying these daily Real Ghostbusters monster posts, make sure to come back tomorrow for another installment and tell a friend about the 31 Days of Monsters.  Also, if you’d like to read more Halloween-y goodness, you can also click on the Halloween Archive link to the left (the banner with King Kong), as well as heading on over to the Countdown to Halloween to check out lists of a bunch of other sites participating in this year’s Halloween blogging event…