Welcome back to my 31 Days of Monsters Halloween countdown!  We’re closing out the third week and it’s really been a blast so far.  For those of you who are just coming to this Halloween blogging event here at Branded in the 80s, in honor of the 25th anniversary of the Ghostbusters franchise, not to mention my love of 80s animation, I’m counting down 31 of my favorite monsters from the Real Ghostbusters cartoon.  These animation cels are culled from my personal collection, and my wife and I tried our best to put them in a not-so-scary to really-freaking-creepy kind of order with the creepiest falling on All Hallows Eve.

Today’s monster is a favorite amongst fans of the Real Ghostbusters.  Its name is Hob Anagarak and he hails from episode 52, "Cold Cash and Hot Water".  According to Inuit legend, this beast is the 1st demon sent to watch over a pre-human fledgling Earth.  Eventually he was magically frozen in an obelisk-esque block of lack ice and was lost in the frozen tundra of Alaska.  Peter Venkman’s father ends up finding him, and all Carl Denham-like (from King Kong), he brings the frozen monster to New York and then stupidly sets him free… 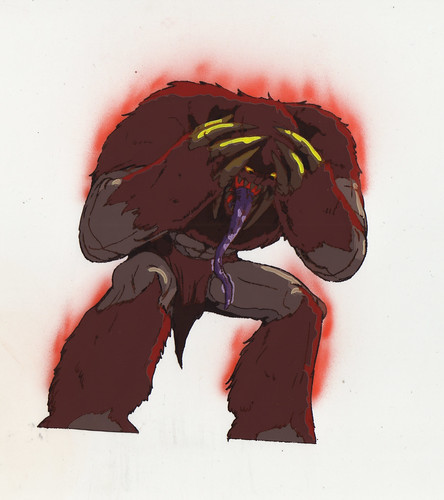 All I know for certain is that after taking a look at those massive
claws, those glowing yellow eyes, and that incredibly long purple
tongue jutting out of that mouth full of razor shard teeth and I was a
bit frightened.  Add to this the fiery red glare emanating off of him,
and it just makes for a creepy image.  I wish I could get a better look at this guy…

Even in the episode this guy ends up blending into the background, so these cels are probably some of the clearest images available of the demon.  I found a slightly different view of this crazy beast.  Just look at those tusk fangs!   Sheesh.  This guy is freaky. 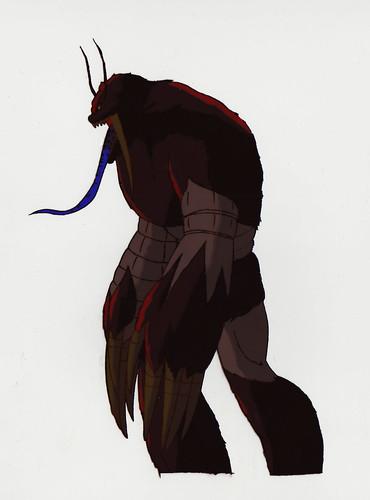 Also, for any of you Real Ghostbusters fans out there that haven’t picked up any of the new DVDs, I’ve decided to give away a copy of the Volume 1 Steelbook edition of the show!  There are only 10 days left to enter the contest, so get cracking. 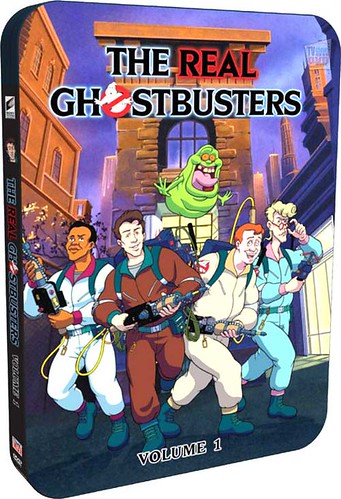 This 5-disc set contains the first 25 episodes of the series (including the 1st thirteen episode Saturday Morning run) as well as some fun special features.  So what do you have to do to win this beauty?  All you have to do is send me an e-mail (or click on the Creature From the Black Lagoon monster in the sidebar) and make sure to include the following:

-Please put "The Real Ghostbusters Contest" in the subject line.-List your favorite monster/ghost/creature from the series.-Include your name.

The deadline for entries is October 31st at Midnight eastern standard time.  I’ll be drawing a winner at random from the e-mails, and will respond to the winner via e-mail on November 1st.  Also, if you feel inclined, I would love everyone to spread the word about the 31 Days of Monsters countdown and the contest, so hit up those social networks and tell a friend (my twitter handle is smurfwreck)!

If you’d like to read more Halloween-y goodness, you can also click on the Halloween Archive link to the left (the orange banner with King Kong), as well as heading on over to the Countdown to Halloween to check out lists of a bunch of other sites participating in this year’s Halloween blogging event…

Don’t you understand, the only thing I’m good at is riding this bike!