Welcome back to my 31 Days of Monsters Halloween countdown!  In honor of the 25th anniversary of the Ghostbusters franchise, not to mention my love of 80s animation, I’m counting down 31 of my favorite monsters from the Real Ghostbusters cartoon.  These animation cels are culled from my personal collection, and my wife and I tried our best to put them in a not-so-scary to really-freaking-creepy kind of order with the creepiest falling on All Hallows Eve.

Today brings probably the ultimate baddy, though it might depend on which side of the fence you sit on, spirituality-wise that is.  What more can I say then, the Devil (insert DUH DUH DUNNNNN reveal music here…) 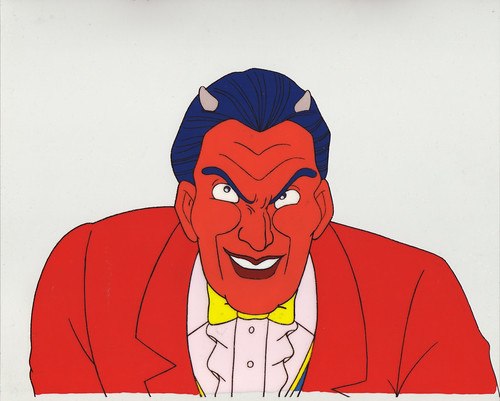 Actually, it’s not exactly the Devil per-se, but a dybbuk.  According to the show (he appears in episode 71, The Devil to Pay), a dybbuk is just a minor demon, but according to Jewish folklore it’s a demon denied access to Gehenna for committing a serious transgression in life that spends the after life maliciously possessing humans.

The character on the show is named Dyb Devlin the host of a hot (couldn’t resist the pun) new game show called Race the Devil.  He figures he can get a promotion (according to the episode’s writer Dennys J. McCoy in the special features on the DVD) to a highler level by taking the Ghostbuster’s souls, but I’m betting the initial idea was that he was just trying to gain access to Hell.  At the same time I think the writers also wanted this to be the one and only Devil as this episode fits the Devil’s archetypical "purchasing your soul" story structure.  This is the kind of concept and brave writing (for a children’s show) that I think makes the Real Ghostbusters series stand apart from a lot of other 80s cartoons (though we did see something very similar in the Wizard of Stone Mountain episode of He-Man.)

Is it weird that I was super excited about the color of today’s monster/deity?  When putting the list together one of the thoughts in the back of my mind was color, and trying to make sure that I represented the spectrum with these creatures and ghosts.  So we’ve got that orange thing covered.  I’ll be honest though, I’m not all that excited about the coat matching the face in terms of color scheme, but what-are-ya-gonna-do?   I am digging the blue hair though…

As far as the imagery goes, call him Satan, ol’ Scratch, Beelzebub, the Source of All Evil, Lucifer, Baphomet, Belial, Mephistopheles, Randall Flagg, Apollyon Satan, Clute, Diablo, Ol’ Gooseberry, or that drunk guy my mom married when I was six, the Devil is pretty much the end all be all of bad guys (well, except for maybe the Nothing from the Neverending Story.)   He’s kind of low on the list because of all his various incarnations (visually), this is one of the tamer versions.  My personal favorite on the way creepy meter is from the Christopher Lee-starring Hammer flick the Devil Rides Out, where he appears momentarily on a stump with the full on goats head and all.  C-R-E-E-P-Y, creepy. 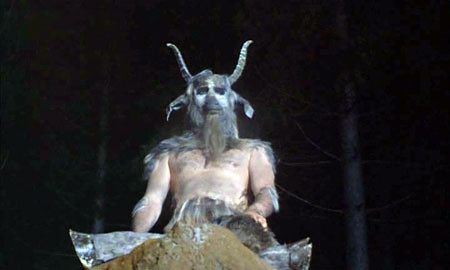 I’m just warming up, so make sure to come back tomorrow for another installment of the 31 Days of Monsters here at Branded in the 80s.   If you’re interested in reading up on some of the Halloween seasons past, you can check out my All Hallows Eve archive.  Also, you can head on over to the Countdown to Halloween and check out lists of a bunch of other sites participating in this year’s Halloween blogging event…