Welcome back to my 31 Days of Monsters Halloween countdown!  In honor of the 25th anniversary of the Ghostbusters franchise, not to mention my love of 80s animation, I’m counting down 31 of my favorite monsters from the Real Ghostbusters cartoon.  These animation cels are culled from my personal collection, and my wife and I tried our best to put them in a not-so-scary to really-freaking-creepy kind of order with the creepiest falling on All Hallows Eve.   My wife Carrie and I disagreed of today’s placement order, but I went with her advice to put him on the not-so-scary section of the creep-o-meter.  So may I present, Spam Man! 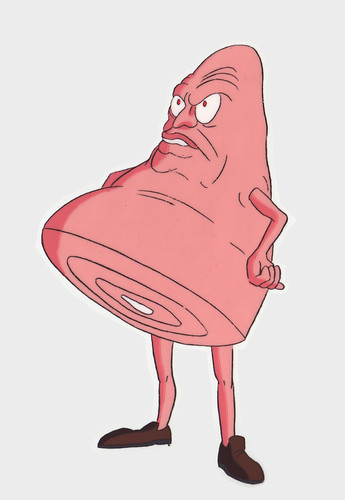 So about that disagreement.  I have a weirdly obsessive fear/fascination with anthropomorphized food, which I’ve written about in detail before.  There’s something completely unholy about food walking around, talking, dancing and looking up at you with puppy dog eyes (or in the case of Spammy above, utter contempt.)  I know a lot of my fear stems back to the scene in Young Sherlock Holmes with the cute little puff pastries seemingly coming to life and stuffing themselves down Watson’s gullet, but I also have to wonder how much of it derives from the all but complete anonymity of how our meats are provided cut, cleaned, and prepackaged in our grocer’s meat case.   If I was forced to kill animals for my own meat consumption, I can pretty much guarantee that I’ve become a vegan in record time.   Just visiting a working dairy farm was enough to turn my wife off of meat and dairy for a year.   So my fear of food having sentience, eyes, or a mouth that could bite me back reminds me that a lot of the stuff I put in my body was living at one point.  If it were just up to me, Spam Man here would fall way far down on the "poop-in-my-pants" section of the creep-o-meter. 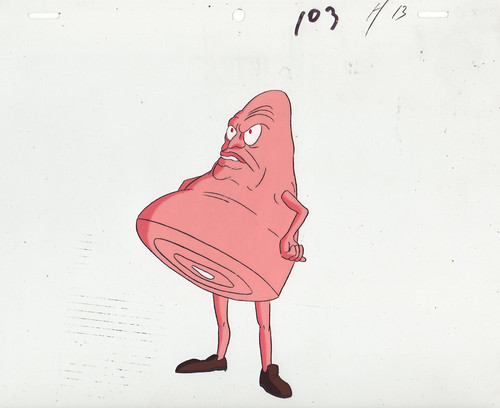 This guy comes from episode 109.B, Kitty-Cornered.  Slimer happens upon a witch’s lost cat that has the power to grant wishes.  He inadvertently brings all the food in the firehouse kitchen to life, which then break free of the fridge and terrorize Luis Tully (the Ghostbuster’s Accountant/friend.)  Seriously, look at that anthropomorhic foodstuff.  It’s haunting my waking thoughts, in particualr that ketchup riding the ear of corn.  HAUNTING I say.

Anyway, back to the actual cel at hand.   Again, when I picked up this beauty it came complete with a pencil under-drawing, and like yesterday’s Stay Puft, the drawing was slightly different than the finished cel which is kind of rare since the pencils are usually kept with the finished cel to act both as a protective layer between it and the other painted cels, and as possible reference later if there is an error.  What’s kind of cool about this though is that the pencil drawing provides a slightly different variation on the figure with his mouth closed and the annotation showing the movement that the character is going to be doing (in this case tapping his foot.)  These little bits of behind the scenes stuff fascinate me endlessly (about as much as I’m horrified by the idea of a walking talking hunk of ham!) 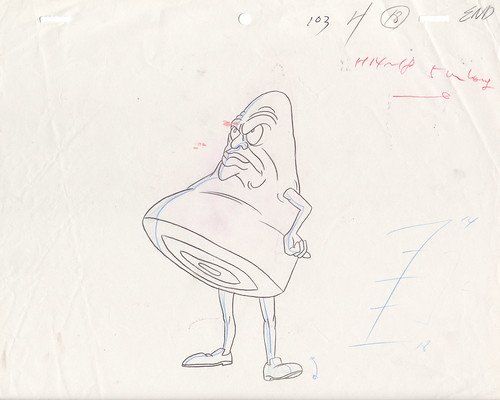 Make sure to come back tomorrow for another installment of the 31 Days of Monsters here at Branded in the 80s.  Also, you can head on over to Countdown to Halloween and check out lists of a bunch of other sites participating in this year’s Halloween blogging event…