It’s coming, creeping and crawling its way like a shambling zombie towards your mortal soul…

I was going to hold this post until Friday, but I’ve got a short week at work, and since today feels a whole heck of a lot like Friday I thought why the hell not!  Have I ever mentioned that I really dig Halloween?  Oh yeah, I guess I have.  Well there are only seven days left until the season starts proper, and I have to say that I’m super jazzed about participating in another round of daily Halloween blogging, my fourth to date.   I’ve been prepping for this year’s countdown to Halloween for the last four months, trying to come up with a theme that’ll be fun on a lot of levels, and then it hit me sometime towards the end of this past June.   2009 has been a banner year for a particular 80s film and cartoon franchise, the one and only Ghostbusters.   It’s the 25th anniversary of the original film, the 20th anniversary of the sequel, and this past year we saw the release of the complete animated series on DVD (which, by the by, is available on Amazon for only $114), as well as a new line of action figures released by Matty Collector that are pretty darn cool.  Also on a personal note, it was just about three years ago that I really began banging this website into a shape that was more along the lines of what I had in mind when I started this whole Branded in the 80s venture with the first official Peel Here sticker column that featured, you guessed it, the Ghostbusters.

So I was thinking back to last year’s countdown and one of the things that I enjoyed sharing were a handful of animation cels from the Real Ghostbusters cartoon.  So, for this year’s countdown, in honor of the various anniversaries and releases, I thought it would be fun to dig back into my collection of animation cels and share some of my favorite monsters featured on the RGB cartoon.  One of the things that’s really special about the cartoon was the vast variety of monsters, ghosts, and creeps that were in the episodes.  I’ve picked up a handful of these over the last year and each day in October I’ll feature a new monster-centric cel (and any accompanying pencil under-drawings) from my collection.  My wife and I sat down and tried to order these from least scary to uncomfortably creepy, so it should be really fun come All Hallows Eve.  It’s the 31 Days of Monsters!

To give a hint of what’s to come, I thought I’d share an appropriately themed cel from the Real Ghostbusters… 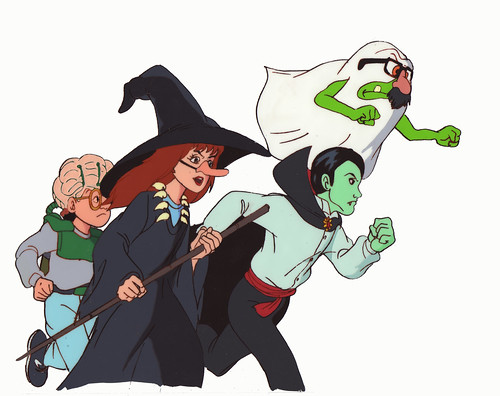 I fell in love with this cel from the first moment I laid eyes on it because it combines two of my favorite things, 80s cartoons and Halloween.  When I share these on the site I like to try and use it as an opportunity to try and learn something about the process of animation by investigating contextural clues.  For instance, I thought it was interesting that the kid bringing up the rear, the mad scientist or whatever he is, has some weird repaints to him.  If you look closely (click on the image to zoom in), his brain/helmet was touched up on top of the cel.  Typically all of the painting is done on the back of the cel so that the photocopied black line art sits on top of all the layers of paint underneath.  The artist also had to touch up his eye, so my guess is that they painted his entire head and face the same flesh color and had to fix it.

Also, you’ll notice that a lot of the black line work is super faded on the cel, turning to a light purple/brown in spots.   I’ve noticed this in a lot of the Real Ghostbusters cels, and it’s one of those aspects to American companies sending their physical animation work overseas to save time and money.  Part of what makes it cheaper is the supplies anf materials used.   Honestly though, I don’t know how much of this mattered at the time the animation was done, as it’s stuff that could have faded over time, and these cels were certainly not meant to be scrutinized 22 years after they were produced. 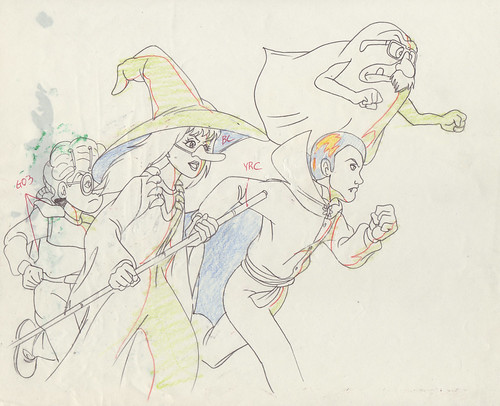 I also really enjoyed the pencil under-drawing for this piece.  I love it when the animators put that extra bit of effort into the drawings with separate colors and such to illustrate the differences between overlapping characters and where shadows need to be placed in the final painted cel.   It’s also kind of neat to pull back the curtain a bit and see any notes, even if it is in code (or sometimes other languages…)

So I hope everyone enjoys the theme, and I can’t wait to start posting some proper monsters.   I’m going to update the site each night, 13 minutes after midnight, so check back often to see what’s in store!

Also, this is a perfect opportunity to point to a bunch more blogs that’ll be participating in this year’s Halloween Countdown.  As I’ve mentioned over the past month, I helped create a site that will hopefully act as a resource, corralling the sites that are joining in on the spooky fun.  You can find it at the Countdown to Halloween or you can click the handy banner below…

You Can’t Do That on iTunes!

Sugary Serials issue #1 is now being serialized as we speak…