Some candy selections from the 2009 season…

The Halloween season is pretty much in full swing.  It looks like the Netherworld Haunted Houses are just about to open their doors here in Atlanta (as well as accepting a new performer/puppeteer, congratulations Liz from Puppatoons!)  Most of the stores have their seasonal sections up, and the candy is flowing freely.  Also, it seems like every year I go through a similar phase during September.  Around the 1st of the month I start getting excited for the holiday, and then before I know it the entire month flies by in a haze.  The Countdown to Halloween night begins in just one week!

As I mentioned on Monday, I plan on announcing my theme on the 25th (this Friday), and then the festivities will properly begin just after midnight on October 1st.  We should also have the preliminary list of Countdown to Halloween bloggers up around the same time as well, so keep and eye out for that.  As for today, I thought I’d take a second and mention some of the interesting candy I’ve seen so far.  Honestly, besides the Bat and Candy Corn Dots, I really haven’t found anything that’s peaked my interest.  Most of the stuff is pretty standard fare, or repeats of stuff from the last couple years.  Aside from the various mini candy bars, Twizzlers, and multi-packs of Wonka branded confections (like the Giant Nerds), I’ve seen a lot more off-brand "gourmet" candy corn in all sorts of odd fruity flavors.   I’ve even seen some chocolate covered candy corn which sounds utterly decadent, and not in a good way. 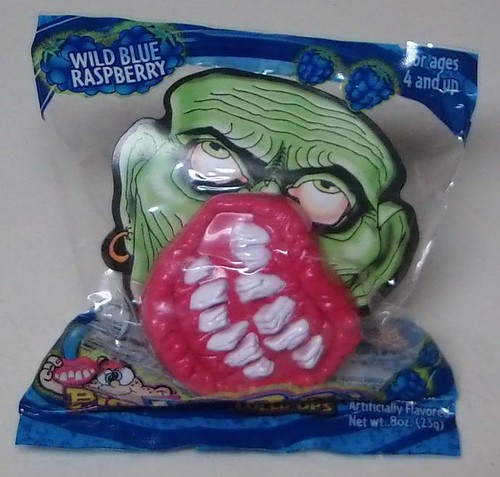 One thing that popped out at me this year is another selection from Flix candy called Spooky Lip Pops.  These have been around for the last couple years but I’ve hesitated in picking them up because the track record for decent tasting Flix candy isn’t all that good.  They seem to have a great handle on design, but that’s about it.  Surprisingly, these creepy variations on the tried and true Ring Pop are pretty darn tasty. 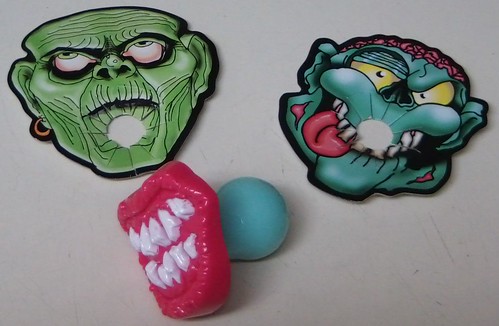 Next up we have a staple of candy lovers everywhere, Pez.  Though it’s nothing new or exciting, I did think it was interesting to see a bag of mini Pez refills on the bulk candy shelves.  Typically you only see some season dispensers in the novelty candy section, and most people probably wouldn’t pop for a bunch of those to give out to trick-or-treaters.  Hell, most kids these days probably aren’t enamored with Pez (relegating it to the much maligned Smarties category), but I’ve always loved it.  There are even mini packs of Cherry Pez, which I’ve never actually seen in stores (only heard about in movies like Stand By Me.) 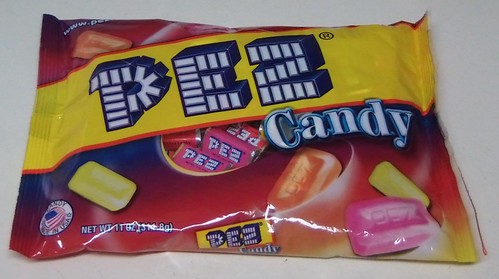 Ever since the appearance of the Gummi Frog Dissection Kit at Target a couple years ago, it’s become a yearly tradition to try and find the most ostentatious gummi product on candy shelves, and each year I’ve managed to find something bigger and crazier.  Last year Wal-Mart had a three-foot long gummi snake.  This year they’re offering something doubly as crazy, a 48", two-headed monstrosity of a realistic gummi snake that even features two gummi rats as snake food! 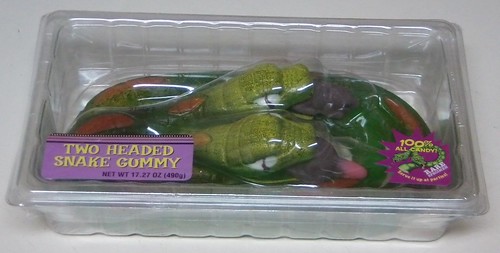 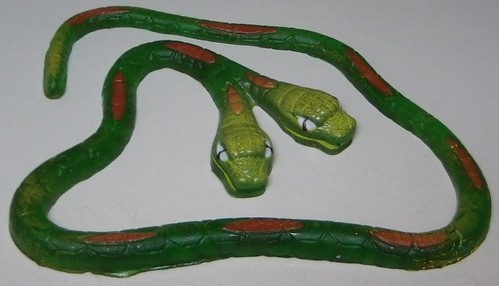 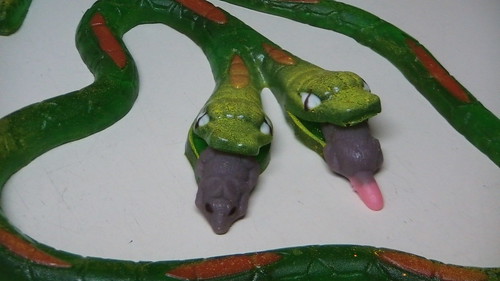 Granted, I’m well aware that if you really want an insane gummi you can order one of the 5lb bears from Vat19 for $30, but for only $5 you can have more freaky gummi goodness than most people can handle.  The two-headed snake design is just crazy, but 48" of solid gummi candy is insane.  Luckily it even tastes good; though there’s no way I’ll be able to finish it.   It’s just too much gummi for one man.

I had wanted to do a write up of this year’s Wal-Mart Halloween section, but honestly it was pretty bland.   I did want to mention a weird trend in their candy pail offerings this year though.  Aside from the growing number of cartoon and movie branded candy buckets which are never very seasonal, I noticed that the large display of your standard plastic pumpkins have abandoned their tried and true orange hue.  All that were on the display were various neon variations in blue, purple, green and yellow.   Maybe the store hadn’t fully deployed it’s plastic pumpkin army, but if they have then it’s a crying shame… 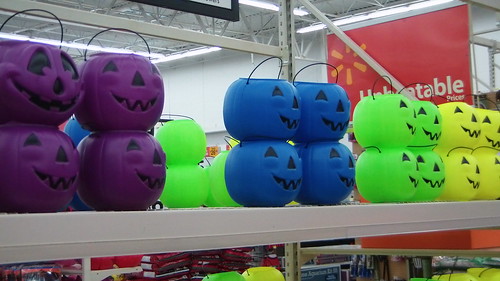 Paying tribute to a gentle monster…

Return of the 31 Days of Monsters, Day 16: Invading the Treehouse of Horror!