I still have a small stack of stickers that are in desperate need of scanning, so to buy myself another week I present a lone Snorks foil vending sticker from 1984… 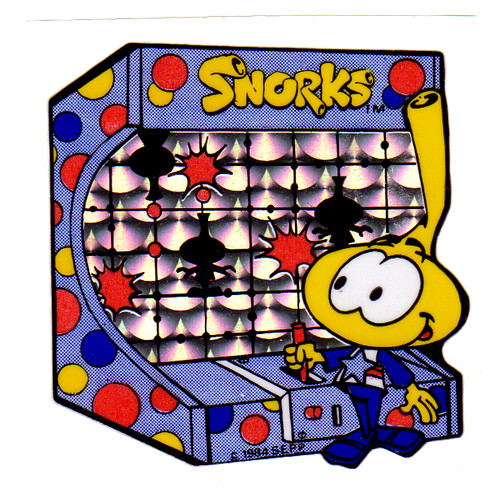 Though I’ve had this sticker for awhile, it didn’t really dawn on me until I was putting together this post that Allstar here is rocking out to a video game that looks like it involves blowing up other Snorks.  On the one hand, it’s not all that disturbing, I mean it’s not like we don’t have six trillion games that involve hunting down and killing other people.  But there’s something a little off about a cartoon character playing Grand Theft Snork.

I never really got into the Snorks all that much, though I do remember watching some episodes here and there on the USA Cartoon Express.   I think they always sort of felt like a low-rent version of the Smurfs to me.  I’m kind of curious to revisit the cartoon though since I really dig the underwater environment.

I also wanted to take a second and let everyone know that my posting schedule might slow down for a bit during the next 10 days as I gear up for the insanity of this years Countdown to Halloween event.   I hope to get everything in order before Friday, which is when I’m going to reveal my theme for 2009.  If you’re curious about all the community Halloween blogging that’s going to start up on October 1st, then you might want to head on over to the Countdown to Halloween blog and see what’s up.

Return of the 31 Days of Monsters, Day 18: The Mystery of Spectral Abe!